"not a single working sanitizer dispenser in the entire airport"

Not Verified | I had a few issues with this airport. The first issue was as soon as I entered the terminal after the initial security check. They had 4 hands-free sanitizer dispensers right on the other side of security and not a single one of them worked. I asked the security guard about it and he just shrugged and said they don't work. Thankfully I carry my own hand sanitizer with me wherever I go so I was able to sanitize my hands. After that I went to check in for my flight. I had extra baggage fees that I needed to pay, which I already anticipated. They have one location that you pay for all excess baggage fees. They were working extremely slowly and they were not able to accept an international VISA, MasterCard, or Discover Card. All of them had travel plans on the cards so it had nothing to do on my side. They only accepted credit cards local to Azerbaijan. For being an international airport, this should be an option to pay with an international credit card. Then, as I looked for more sanitizer stations, they had many posted throughout the airport. I found at least 8 more after I went through security. Not a single on worked. During COVID, this should be one of the priority items to help minimize the spread of COVID at an International airport. They did not have a single working sanitizer dispenser in the entire airport. Then, because of the issue with them taking so long to pay for the extra baggage fees, I needed to quickly get to my departing gate because they didn't open the check-in process until two hours before departure instead of the three hours for an international flight that they are supposed to. I went to the security check I was accustomed to use and I was then told after I got up there that that security checkpoint was not open and I had to enter through the other side of the airport. There were zero signs showing that the security checkpoint was closed. Normally this wouldn't be so big of an issue, but because of the delays with paying for the extra baggage, the plane had already started boarding and I didn't have much time. My family and I had to run to the other side of the airport to go through the other security. This airport is not very large, but it still takes a little time to get from one side to the other, especially when you are already late because of delays that were beyond our control. We were at the airport four hours early and almost missed our flight because of all of these combined issues that were out of our control, the security being shut down without notice, the excessive delays with the baggage, and them opening up check in 2 hours before flight departure instead of 3 that is stated. This was a very frustrating and bad experience at the airport and much of it would have been eliminated if they just had these things in place that are common sense.
8/10

"pleasantly surprised in many ways"

✅ Trip Verified | My first visit to Baku Heydar Aliyev Airport and was pleasantly surprised in many ways and disappointed in a few others. The airport has very striking architecture and is not very large but easy to navigate. The design is very interesting as it has three levels with the departure level on the this floor. The number of high end shops at an international airport of this size surprised me. The airport is about 20 minutes to 25 minutes from downtown Baku by car. They do have a bus service and plans to extend the Baku Metro to the airport sometime in the future. Now for the disappointing parts. It took quite some time for the luggage to arrive at the carousel at 2:00 am even though my flight was the only one at the airport. Also immigration coming and going took an inordinate amount of time with someone with an American passport. In some ways it looked like they had not even seen an American passport before! And the security check leaving was very overzealous bordering on Soviet like. They confiscated my luggage scale from my carry on even though I protested that it was went through American security!
7/10

"Was very impressed with the airport"

✅ Trip Verified | Was very impressed with the airport, on arrival visa process was so smooth and was done in few seconds and the staff were friendly and smiling on departure. Passport control was done fast and staff were nice. Plenty of shops and places to eat and drink, the design of the airport T1 is very nice and modern spacious and bright and easy to navigate. I’m not sure about the public transportation as I had my pick up and drop off arranged by my Hôtel. Overall it’s a nice airport.
4/10

"airport really needs to get with the times"

Not Verified | The airport is clean and looks great. However, it is let down badly by the circus that you have to put up with if you are a transit passenger who needs to pick up a boarding pass on arrival. I had a 3.5 hour layover in GYD traveling back from Aktau. The staff could not/would not print me off a boarding pass until 1.5 hours before my connection, leaving me stranded in a holding room. I had booked with AZAL, but because it was a codeshare with Turkish Airlines, this made them less helpful! The airport really needs to get with the times and move the check-in area into the main airport transit area. It makes zero sense preventing people from accessing this area and stinks of a computer says no attitude.
8/10 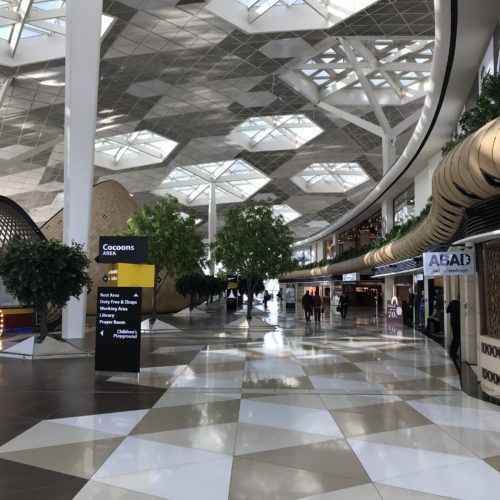 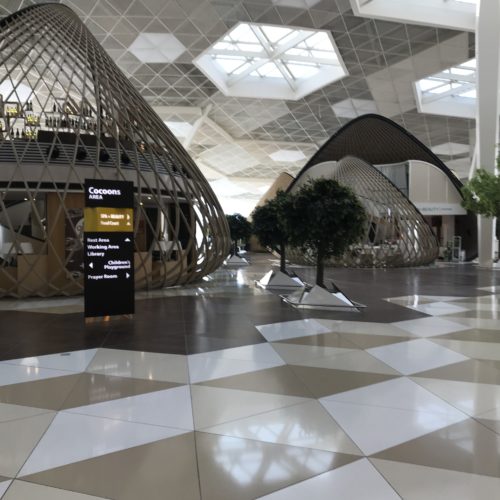 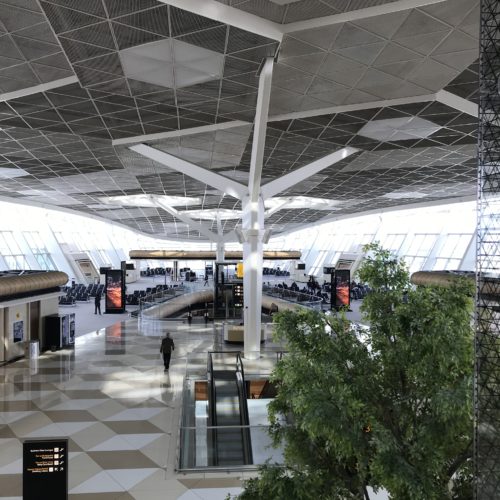 "cleanliness and planning are good"

✅ Trip Verified | Free WiFi, cleanliness and planning are good. Queue for security and immigration took around 45 minutes. Should deploy more staff for this purposes. Restaurants after check in are less and with no good choice.
10/10

❎ Unverified | Staff are just rude. Very slow and unorganized, the visa stand was just chaos. They dont call people correctly they just throw your passport and you should go and check if it's yours. It is very unwelcoming, unorganized and is not how airports should ever be. This is not a poor country and yet their airport staff and standards are just poor.
9/10

Very nice clean, new, unbusy airport with friendly staff. Unlike some western airports there are 2 security checks. First, at the very entrance into terminal building and regular one. But both of them are quite efficient so no problems. The terminal one is newly built and equipped with all necessary facilities. I arrived 2 hours before my flight and quickly checked in and got boarding passes. Fast free wi-fi is available. I'd like to share some info regarding transportation options to and from the airport. There are some old reviews saying that the only option is taxi but it has changed. BakuBus company recently launched Airport express service from city center to the airport. Buses depart every 30 minuest. From center to airport: its stop is just outside 28 MAY metro station (also close to 28 MALL). Turn left towards Samad Vurgun park. Airport Express clearly indicated on the bus. Airport to city: At the airport ask information desk about the shuttle they will guide you. It also stops at KOROGLU metro station. Duration of ride is 30 minutes. Information about Departures and arrivals is available on screens of the bus. Make sure you have Baku card (no cash is accepted). Per ride cost 1.3 manat (less that 1 usd). Very reasonable considering 15+ taxi prices. Buses are very comfortable and new.
1 to 10 of 31 Reviews