Austin is one of my least favorite airports in Texas. Long security lines. Limited seating at gates. No plugs to charge phones. But there are good barbecues and music if you have time to enjoy. The rental car facility is half way to Dallas. Rates are high. Cheaper to Uber than rent a car. Construction on highway at entrance to airport slows you down. Signage to rent a car area is poor and causes confusion. Best tip is to go through west side security. This is a perfect airport for Southwest flyers who want that cattle car experience like Love Field. 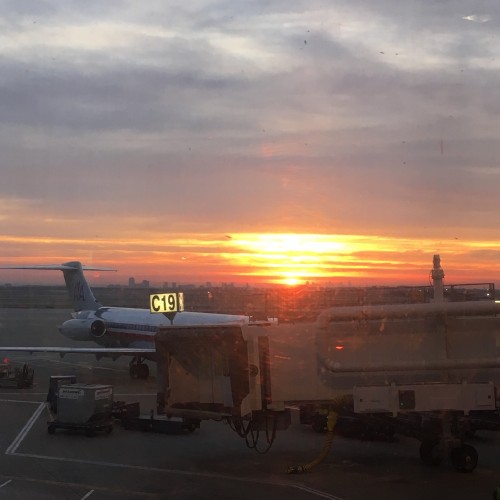 Flew in from Las Vegas to Austin-Bergstrom via Frontier Airlines with my fiancee. I had done my research on the airport and knew it was not like the other airports I'd experienced before (Vegas, LAX, Phoenix and JFK were all far bigger, and Kahului was much smaller). When we landed, other than an adventure to find the rental car facility (which is hidden above a parking garage across from the terminal, just in case you're headed that way soon), our process was very smooth. All we had was a carry-on, so no hassles with checked baggage. Everything in the airport was pretty clear, though I would hope they'd make some updates soon, as the city seems to be outgrowing this airport already. ABIA is smaller than almost any other big-city airport, but the layout is easy to follow for the most part. Checking back in for departure was something of a difficulty (but being a Sunday night, I expected no different). TSA was helpful, but lines were not clearly defined. Check-in kiosks for Frontier were hidden, but easy to use once we found them. Overall great experience, but this place needs to grow a bit more to fit its city.
7/10

"found the airport clean and fresh"

I found Austin Airport to be clean and fresh, however it did have crowded immigration and was rather small, other than that great.
9/10

A lot of reviews for Austin—Bergstrom International Airport are outdated (it's been a long time since 2009 y'all) or simply have nothing to do with the airport, such as hotel shuttles or traffic. I will admit a bit of bias on my part since this is my hometown, but really it's one of the best mid-size airports in the country. Terminal Signs and Directions: the airport installed interactive screens that help with way-finding. They are useable, but kind of slow. Signage is abundant throughout the main terminal. Queueing Times: In July 2015, ABIA expanded its ability to handle passengers significantly with the opening of a new passenger screening and customs facility. It's significantly easier to access the eastern part of the terminal from check-in. Terminal Cleanliness: The terminal is kept rather clean, and recycling stations are abundant throughout the terminal. The sorted system is somewhat unnecessary given the city's switch in recycling policy, but they're well-used. Terminal Facilities: There's some funky art in the terminal, and not in a good way. That being said, the airport is a sleek, modern building that can be somewhat overtaxed at times, especially around festivals, but befitting of the city. The Admirals Club leaves something to be desired. Not enough outlets. Food and Beverages: Good to excellent. Mostly local companies. The reason I take off a star is because honestly sometimes I just want some disgusting, processed fast food, and ABIA doesn't really have that. Airport Shopping: Again, mostly local companies operating stores, which limits the selection to Austin-themed merchandise, with no real duty-free. It's nice but nothing remarkable. Airport WiFi Service: Okay this is probably my biggest sticking point. The city is a high-tech hub. We're world-renowned for our technology sector. The WiFi should not be limited to "Free for 30 minutes". The airport has been growing for about five years straight as of writing this review, with several record-breaking years in a row. There's always something new to check out, whether it's an art exhibit or a new destination or airline being added. We've had two international carriers come in and start highly successful routes in as many years. I'm hoping the airport can keep up with the momentum.
2/10

I had several trips each quarter to AUS giving me a chance to figure out how to use the airport. First give yourself lots of time to get from your starting point to the airport by car as the roads in and around Austin are terrible - badly designed and poorly maintained with tremendous volumes of traffic. Second give yourself more time if you are on the first flights of the day as the check-in and TSA security cannot handle the large volumes first thing in the day. Third prepare to have some sort of strange interaction with the TSA as they exercise their improbable variant of "logic". Fourth eat before you go to the airport as the options inside the "secure" area are plentiful but of poor quality. Otherwise once you are inside the "sterile" area the airport is well-designed and I see others have mentioned the good massage spot near gate 13. The bathrooms are excellent. Unfortunately you frequently need something like a stiff drink and a massage to release the tension associated with the bad roads long lines and ridiculous TSA.
5/10

Austin Bergstrom Int'l is one of the best American regional airports. Southwest and American dominate here it can be costly to fly to/from the US west and east coasts and international service is non existent but the airport is among the most well-designed and efficient. The terminal is spacious overcrowding is seldom an issue and there are plenty of dining and shopping options. This airport should be used as a model for all new medium-size airports being planned.
2/10

One key to a good trip through AUS is to minimize your time within the sterile area as the activities are very limited. The restaurants within security are relatively expensive and serve very poor food especially those that purport to be airport versions of the local fare. No Starbucks. If you can avoid evening departures as this is when the live musicians play in the center area causing an already noisy airport ambience to become even worse. If you can avoid early morning flights as the TSA security theater is made worse by inadequate entrances resulting in lines that stretch the length of the terminal. For those with checked in luggage the lengthy wait times upon arrival can be problematic; however the airport restrooms are some of the best in the US. AUS has both a good heel bar and an excellent massage kiosk. The roads to the airport are very very poor and the signs are confusing at best just like the rest of the city so plan lots of extra time to get to the airport on the terrible Austin roads. The car rental facility is on site although "customer service" can be a problem.
2/10

The roads around the airport are poorly designed and constructed so it is not easy to find the airport or the rental car facility. This is also true of the rest of the Austin region so this is not unusual for the city where correct signage is at a premium. No Starbucks but lots of other local restaurants although their menus are limited. Lots of light and high ceilings but not an airport to spend lots of time at unless you like the massage spot.
4/10

Austin has free internet service Downtown but not at their airport. There is Not a Starbucks but they have a local substitute of a high blend coffee shop. I feel sorry for families traveling because there is not any kind of restaurant food that children will recognize. It would be nice too if there were more electrical outlets for laptops and phone chargers. It is kept very clean and the easy access to rental cars is a very big plus! Amy's Icecream is worth the calories.
4/10

AUS is decidedly different from a lot of airports in that it tries to be well Austin. There's a live music stage in the center of the terminal and local businesses dominate the shopping scene. Much of that as other posters noted is annoying as you can't get a cheap snack and lines can be long. Shops are definitely "Austin" but needlessly expensive. The music is well hit and miss. I prefer quiet to some of that stuff! For the Starbuck's fans there's one in the terminal now. There are "Austin-inspired" murals above check-in. Great to have local artists but the art is rather pedestrian showing scenes of poor Hispanics. I think there's probably more to Austin than that. Getting in and out is easy although I have had long luggage waits. The roads and signage to the airport are OK but getting better. Seems like they built this airport without figuring out how to get to/from the place. No freeways to the place but supposedly they're working on it. Parking is not cheap but not expensive either by some standards. The cheapest is $7/day. Better to take the bus if you can if going away a long time. Car rental is usually easy. Taxi is easy. Blue Van may be a long wait and long drive as they drop off others. Early am flights (6:30am and earlier) are insane. Long long lines at security as all airlines seem to have flights at this time. Arriving earlier is not an option as the airline check-in counters and security don't open until around 5:30am.
21 to 30 of 37 Reviews