✅ Trip Verified | I have been through this airport many times. I dread it. Not because it’s usually busy but some of the TSA representatives are very rude. They yell at you like you are an idiot. This time it was organized well & the TSA representative who organized the line was professional. However, the TSA representative who set up people of 2 to walk passed the K9s was extremely rude and yelled at other passengers. We are made to feel like cattle or worse. Then after this experience I was yelled at by a Coffee Bean employee because I wasn’t speaking loud enough with my mask on. She had the meanest look on her face. Like I was assaulting her. If my family wasn’t living in the Atlanta area, I would avoid going to Atlanta. It’s a shame because it’s a nice city. Every airport employee needs to realize they represent their city.
3/10

✅ Trip Verified | I've used this airport many times. Security staff are rude. Delta staff are rude. Immigration and customs are third-world level disorganized, at least they were last time I went through them at ATL. Airport is dirty. Restrooms are dirty. Even TSA Pre-Check and CLEAR lines are very slow due to the sheer numbers of people. International terminal really isn't befitting of one. Very, very unimpressive airport. Anyone can use the excuse that they're the busiest airport in the world, but Singapore Changi, Hong Kong, Seoul Incheon, Tokyo Narita, Amsterdam Schiphol, Paris CDG, and even Detroit are much better examples of how busy airports are run and should be run. Heck, even other Delta hubs such as MSP, SLC or LGA would be a good starting point for ATL to learn some valuable lessons. Get your act together, ATL.
2/10

"no reason to be that rude and loud"

Not Verified | Had a stressful morning which was completely my fault are forgetting my purse with all my wallets and work laptop at home. I had barely made it to the security after my Uber trip back and forth trying to get my purse. At the security check I was very nervous that I was going to miss my flight hence I was rushing and had placed my stuff in one of the containers for security checked. I place it on wrong a bucket I guess since i was in different head space but darn the lady yelled at me very rudely. She was very polite in fact was even flirting with a guy standing in front of me and her whole attitude changed when it was my turn. I understand I may have placed it on a wrong place accidentally but she had no right to yell that loud in front of everyone. I even said sorry I have a flight leaving like in 10 mins and I was trying my luck. She disregarded my apologies and proceeded to yell at me loudly second time. I was shocked , because there was no reason to be that rude and loud. Everyone at the airport was very cold and rude except the waiter at the restaurants. Everyone has a day they go though but being a little nicer would make things lot easier for everybody. TSA securities I understand you guys are tired of us but there no need to be rude somethings can be said a little nicely.
3/10

✅ Trip Verified | The security lines are terrible. The TSA employees do not care. Does not matter if you have clear, pre check or digital ID. The lines are way too long. Even on a Sunday afternoon
2/10

"too busy for you"

Not Verified | ATL airport: busiest airport in the world but too busy for you. Literally running Tom Cruise style through the airport to miss my flight by 5 minutes Security line was almost 1 hour at 6am in the morning! This is ridiculous. Best my airline would do is put me on standby and maybe get another flight or pay up. Got no help from the airport or my airline. If you fly out of ATL, be warned 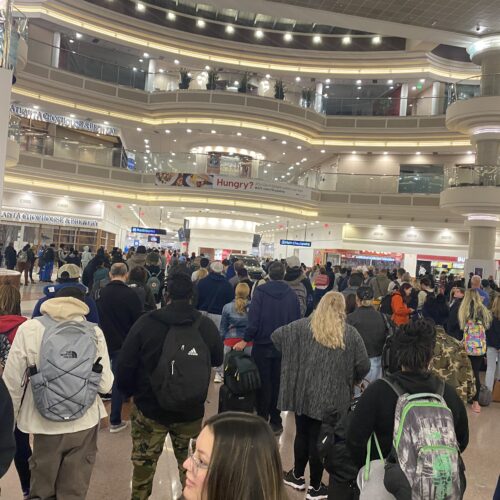 "I despise having to come here"

✅ Trip Verified | Over an hour to retrieve bags. Always a wait at this airport. Busiest in the world and they can’t handle it. Maybe reroute some flights to more suitable airports? I despise having to come here.
10/10

"I was so pleasantly surprised"

✅ Trip Verified | I was so pleasantly surprised by all we experienced at Atlanta going to FL and the going home to OH. The people at all Delta counters were so nice and welcoming. The restrooms were really clean and well identified. The terminal to train from T to A was immediate, clean and well directed. We then got a Dunkin Donut, coffee and ate at catCora’s kitchen. The food was very good, beautifully presented and our waiter was so nice. Thanks Atlanta!
4/10

✅ Trip Verified | The busiest airport in the world could sure stand to get its act together. To its credit, the signage to access the terminals from the highways and to leave the airport were, in my opinion, ample. The majority of personnel we met in that airport, even security, were polite and professional - the only reason I'm not giving this airport a completely flunking score. That includes personnel for both Delta and Frontier Airlines. The tram connecting the terminals is clean and wonderfully efficient. Some of the Delta SkyMiles lounges are national-class, even world-class. That's where my compliments end. Now here's the bad stuff: The airport is predominantly dirty (not as dirty as Denver or Seattle, but still pretty bad). There are few places to grab a bite to eat or something to drink pre-security. The baggage and ticket counters are cramped and narrow, unbecoming of the world's busiest airport. Most departure gates are also cramped and narrow, with little seating, also unbecoming of the world's busiest airport. The security lines are astonishingly inefficient, even by US large airport standards; using CLEAR and Pre-Check in tandem should take five minutes, even on a busy holiday or weekend - not 25+ minutes like it did. If you don't have an expedited security clearance like CLEAR or Pre-Check and have to wait in the normal line, 90+ minutes to get through security on the busiest of days isn't unheard of. Again, to security's credit, the TSA officers I met were nice enough, but there clearly aren't enough TSA officers staffed at ATL. And, to the credit of the thousands and thousands of passengers being herded like cattle, people behaved relatively orderly and politely. But thousands and thousands of passengers hourly shouldn't be beholden to the whims of government incompetence - which, like I've said, is unbecoming of the world's busiest airport.
3/10

"why do they provide lousy service to their guests on later flights?"

✅ Trip Verified | In coming home from visiting Colorado Springs, I arrived at Atlanta airport around 1.40am and the train that you take at the gates to get to baggage claim and ground transportation was operating on a “limited schedule.” Meaning you could wait to see when and if it would come to pick you up or walk. I was exhausted, like everyone else but we all chose to walk. Based on my activity tracker, we walked about a mile! This is not the first time this happened arriving in Atlanta late. If planes are still landing at 1.50am, why is the train not operating on the normal schedule? Atlanta airport boasts beefing the busiest and most efficient airport, why do they provide lousy service to their guests on later flights? So beware of the long walk if you arrive past their normal train running schedule!!
5/10

"yelled at by a cleaning person"

Not Verified | My wife and I found the cleaning staff, in particular late night arrival and early morning departure, were very rude and inpatient. We were yelled at on two occasions by the staff cleaning the floors near the plane train area because we were not directed by signs or staff which side of the cones we should be standing while waiting for the train. Again today, as I was arriving for an early morning flight, I was again yelled at by a cleaning person for being on the wrong side of her cones. There were no signs or persons available to direct foot traffic as to where to walk or not walk, just a red tape down the middle of the isle. Not a very good impression to greet guests arriving to such a busy airport.
1 to 10 of 363 Reviews