Not Verified | The worst experience of my life. Because we have a Saudi ID, we were denied entry into Jordan after paying for Visas and PCR COVID on arrival tests. Hotel was booked and plans were all made. We got taken into a super dirty room with people on the floor and crying babies. Felt like a refugee camp in an airport with people here for 2 weeks (from Yemen) without a shower to wait for the next flight home. They tried to take our phones away and we needed to ask for permission to use the WC. We then finally got deported after the German embassy managed to speed up our case (16 hours is quick in comparison) and get us on a flight. Super rude and toxic police and airport staff: fast fast! they say to us (if they speak English) and when they work it’s „five minutes“ which turn into 20 minutes easily. Every police office is full of smoke and nobody knows what to do but smoke cigarettes and watch things on their smartphone. We came as tourists to visit this country and spend money there but guests are treated like trash by the security staff and police officers. 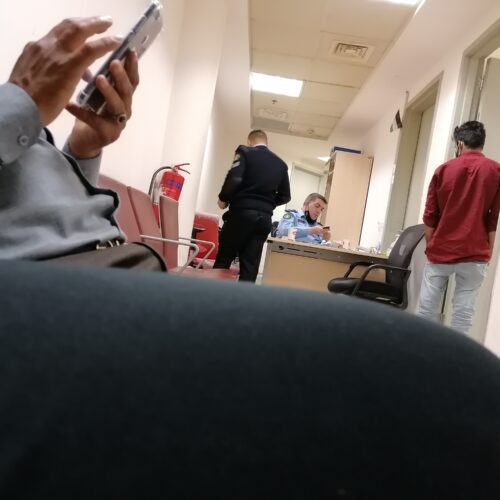 "had a very bad experience"

✅ Trip Verified | I had a very bad experience travelling through this airport, few staff member can understand English. They are rude and dont explain what they are about to do in terms of security checks. They search people irrespective of their age. It happens at every gate at last three times before you get your connecting flight . It takes ages and makes you run to catch a connecting flight. Won't recomend anyone with short connecting flight duration .
1/10

"the airport smells of smoke everywhere"

Not Verified | Looks nice and clean, but beware. Airport temperature is set at about 82 degrees in winter. I was so hot I thought I might be sick. There is a smoking area, which has doors, but is not sealed or ventilated properly so the airport smells of smoke everywhere. Staff are rude. Two security checks are needed for flights to the US. Not that they do anything different, but the exact same X-ray and pat down that was done downstairs needed to be repeated again upstairs. Everyone flying to the US had to do this double X-ray screening/pat down. Water that was purchased after the first security screening was not safe for the second security screening. Once you have had the second screening you are trapped in a glass box where you cannot get anything to eat or drink or use the bathroom. The line to get into the glass box was so long you couldn’t leave to meet your needs and try to redo the second screening for fear you would miss your flight. In hindsight I shouldn’t have worried about the time it would take to wait in line again since both flights were delayed several times despite having excellent weather. When the flights are delayed here it starts with 15-20 min at a time. Eventually you will be waiting for an additional hour or longer, which of course made us miss every additional flight we had. Don’t fly to or from Amman.
1/10

✅ Trip Verified | Just had an international flight with a short layover at Amman. We had to stay overnight because our flight was delayed and we missed the connection which is fine. However, when my group went through customs they took everything out of our baggage and questioned us about every piece, and destroyed right in front of us no less than 5 expensive souvenirs from Egypt including carved alabaster, special stone, etc. and they didn't care. Then they decided my bag had sand in it (I collect little vials of sand from destinations) and that is unacceptable in a carry-on so they walked me out to force me to check my carry-on bag. Which, since it's now a checked bag after being thoroughly checked at customs, it got checked again. This time they destroyed some glass pyramids. This was absolutely the worst airport treatment I've ever had at any location and I will absolutely not take another flight that lands in Amman ever again. Take your service elsewhere if you carry anything valuable or sentimental.
8/10

Not Verified | Clean, all services were very good. I have used this airport more than a hundred times, always as expected, need more staff to help travelers, but as an overall experience I rated this airport very positively.
2/10

"staff not friendly at all"

Not Verified | Extremely poor seating, staff not friendly at all. Flight kept getting delayed but I only knew because of my app. Not one single person would provide an update for the flight at all, we just kept sitting there not knowing when it was going to take off. Not too mention I had to wait an extra 20 minutes for the security to swab my laptop (they didn’t have the tool to swab it). When they swabbed it for residue they swabbed mine alone with three others on the same swab. What would happen if one of the laptops hit positive and they transferred it to my laptop?
1/10

✅ Trip Verified | With a wife and 2 minor children I travelled through this poor excuse of an airport simply en route to Egypt and Turkey respectively. Let's begin with the first day in July where naturally two minors fell asleep on the Royal Jordanian flight. Cabin crew were brilliant and suggested we take the food packs for the children to eat whilst waiting at the airport. Once there, we were sent from one place to the next, received by a group of Male staff near x-ray machines commenting in Arabic amongst themselves in a derogatory fashion about the women they saw like a pack of teenage adolescents with no professionalism. Once greeted by them, lo and behold they confiscate the airline's own sealed pre-packaged food trays. Then, over the moon with their accomplishment, thinking nobody but them understands Arabic, they giggle at one another and say "let's take their water bottles too (airline provided whilst leaving the plane and unopened!) and say it's a security matter". What I can say other than the fact they have to be the worst, most rude and undignified pack of so-called security staff I have ever encountered and I travel the world! Needless to say the other airports visited in the same trip, Cairo and Istanbul were 5 star, Amman desperately need to emulate and Royal Jordanian really need to take such complaints forward as it doesn't help them either. Returning in August, experienced the same with airport security staff, so this time I passed them a little extra food purchased specifically for them and told them so to prove a point! This time the rabid dogs had a female employee arguing with her colleague in Arabic at the top of her voice regarding her rota. If you use the Airport lounge in Amman as we did, be prepared to be charged fraudulently and expect your belongings to go walkies if you don't have a guard dog! Worst Airport ever encountered.
2/10

✅ Trip Verified | We had extremely negative experience with Queen Alia airport security service at afternoon 11th March 2019. Despite of proper packaging (according to internationally accepted requirements – 100 ml one item max volume, 1 liter/person in special bags) of Dead Sea cosmetics in our hand luggage, these items were confiscated by security. Explanation of such action - “new” rules, recently issued specifically for this airport, do not allow carrying of Dead Sea products in hand luggage?! Security officers could not provide us with official document (printed, online etc.) on that matter. However we received clear proposal to buy the same products in duty free shop – three times higher price. Unofficial agreement between security and duty free shop is very likely. Communication and confiscation process was realized in unacceptable and rude manner. Nice building, but obscure, not transparent procedures and actions. Airport administration and customer service stay away – security actions are sacred and indisputable. Surely there is inhospitable place for visitors.
10/10

Not Verified | Good experience, beautiful airport, kind staff, perfect gates, it's really a good airport which will achieve more success in the future.
5/10

"Better to find another place to transit"

✅ Trip Verified | Free WIFI. Security scan just took my lens blower because it is dangerous? Sign on gate told people to board plane but ground service just let people wait for no reason. Better to find another place to transit. Battery cannot be in carry-on baggage here. It needed to be in checked baggage.
1 to 10 of 71 Reviews