"our flight got cancelled"

Not Verified | Orlando to Amsterdam via Reykjavik. Like many people here, we booked several months in advanced and our flight got cancelled few weeks before departure. Without any reason. Wow Air offered an alternative; flying two weeks later or fly from New York rather than Orlando. Both weren't realistic and the customer services agent agreed. We had our hotels, rental car, events, etc. already booked. Since it was in the beginning of January, it cost us an additional 600 euro to fly home with another airline. Hours later than we originally planned.
1/10

"license to be rude"

✅ Trip Verified | Boston to Keflavik. Horrible airline! Really WOW - wow the worst ever! Their personal act like they’ve got license to be rude. First and last time I’m flying Wow Air. For the international flight they charged me $70 for a small carry-on!
1/10

✅ Trip Verified | Amsterdam to San Francisco via Reykjavik. Never again!! I was blindsided by the seemingly cheap fares. Turns out, it wasn't cheap at all, because I needed to pay for luggage, seats and what not. What frustrated me the most was that my partner's luggage did not arrive in San Francisco. We were without his suitcase for 10 out of 13 days on our vacation. Back home, we filed a request and Wow aiR granted us a compensation (which they are bound to do by law!!) and said that processing the payment would take between 10-12 weeks. Very irritating, how can making a money transfer take up to 12 weeks? Now, after 4 months, the money has not been transferred. Wow air does not answer our mails and the hotline employees keep putting me off. What a scam! Do not book a flight with this airline, it is most likely going into insolvency, seeing as they're withholding money and cancelling destinations altogether.
1/10

"I was given a normal seat"

✅ Trip Verified | I booked a seat with extra feet space (between Reykjavik and Chicago with WOW air) because I have knee problems and paid 43 USD extra for the seat, but I was given a normal seat. When I asked for my seat I was told that this was the seat I booked which was totally wrong.
4/10

"licence to be rude"

✅ Trip Verified | Baltimore to Reykjavik. WOW has the worst customer service ever seen. This goes across the board from ground agents to the flight attendants. Our flight crew was terrible from Baltimore to Reykjavik. When we board the plane no one was greeting the passengers. During the flight upsell stuff was the only goal of the crew. They barely answered simple questions and when they answered they were plain rude. In Reykjavik during my return the ground crew were so rude I really could not believe it. I understand the company rules and being a discounted airline, but I cannot accept people being rude to a paying customer. Being discounted airline seems like gave these people licence to be rude. Take it or leave it is the attitude! Pay more fly respectfully.
1/10

"Airline is a complete shambles"

✅ Trip Verified | Boston to Dublin via Keflavik. Airline is a complete shambles. Sold me a $50 seat after loads of emails they refused £30.99 tho it cost me £42.15. Apparently this is not their problem. I’d recommend paying extra to fly with a respectable airline.
2/10

✅ Trip Verified | San Francisco to Delhi via Reykjavik. Very disappointing airline. They nickel and dime you for everything. Checked in Baggage: $175. Carry-on bag: $75. Water on flight: $3. Snacks: $5-8. Meals: $12-18. Cocktails: $8-12. In flight movies: None. In flight WiFi: None In my attempt to find the best fare from SF to Delhi and back, I found a fare of $1200 via Kiwi.com. But get this. I had to change my flight dates after booking, and Kiwi.com charged me $400 for that. Plus all these charges by Wow, and a ridiculously winding itinerary, my trip has now cost me $2400. Such a lousy experience. A big rip-off. WowAir and Kiwi.com - 2 thumbs down! 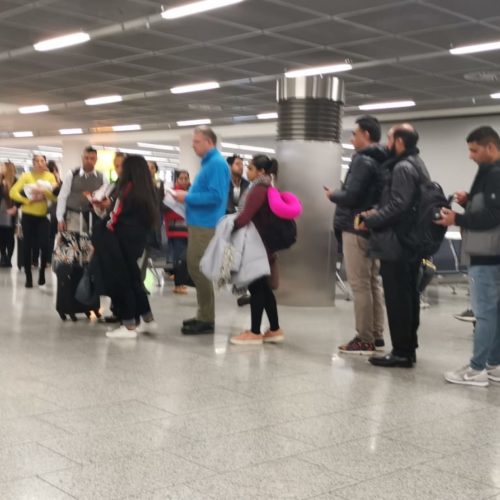 "I never got paid"

✅ Trip Verified | Brussels to Montreal via Keflavik. I got approved for about 350$ of baggage damaged (request number 538729). The issue is that I never got paid and since then I am not getting responses from the baggage team. I am not sure if that is the way WOW air operate or a huge lack of customer support response.
2/10

✅ Trip Verified | Copenhagen to Reykjavik. WOW air asked him to pay an abusive price for his hand luggage (90 euros). The hand baggage had the appropriate size and less than 10kg. I wrote several times to the company and they dont give me a satisfactory answer. The same day my son took a flight with Norwegian and nobody asked him to pay any fee for his hand lugagge. This is an abusive attitude from an non-serious flight company.
1/10

"don't care about their clients"

Not Verified | Toronto to Milan via Keflavik. WOW has the worst customer service ever seen. I was supposed to leave from Milan to go to Toronto on January 9th, and my flight was canceled. I called WOW in order to switch to another flight, and I had to check the flights myself because the person who was supposed to help me just wanted to refund me instead of finding another flight, or send me to Montreal, which is 600 km away from Toronto. When I asked what I was supposed to do to go from Montreal to Toronto, she said: find another flight. Since I insisted a lot, they found (or better, I found) a flight on January 4th. I was supposed to leave on January 4th to go from Milan to Toronto: the plane was supposed to leave at 9.30 am, ad it was delayed at 8.30 pm. I called WOW in order to understand when my next flight (from Iceland to Toronto) would be, and none was able to tell me for sure what would have happened: they insisted that I would go to Iceland first and then understand from there. I bought another flight. So, don't fly with WOW, when something happens they are just not able to help you in any way, they do not communicate well and they don't care about their clients.
21 to 30 of 579 Reviews