✅ Trip Verified | Possibly the worst airline I have had the misfortune to use. Delayed over 12 hours on outbound journey. No ground staff to greet us and walked aimlessly around an airport asking for help. Had to take 3 flights the following day to get to our destination. Customer service is zero! Will never use this airline again.
2/10

✅ Trip Verified | Rude and incompetent customer service. I had a question regarding one of their policies and not only did they talk down to me like I'm a child, they gave me false information (I checked later with their cabin crew). Everyone I know who's had the displeasure of dealing with Widerøes customer service have had roughly the same experience. It's a shame because they sometimes provide one of the cheaper flights in Norway, but I'd rather pay an extra 10% to avoid this company. The trip itself was ok.
1/10

"not reimbursing the customers"

Not Verified | Norwegian government closed the borders, but the company insists in acting at least immorally. Since tourist cannot enter the country, we cannot fly internally, and the company is not reimbursing the customers. Weird way to make money. In these moments we see how certain companies keep their ethical standards.
1/10

"definitely do not recommend"

✅ Trip Verified | Bergen to Tromso. I had a flight the past 18 March (my honeymoon) and due to obvious reasons I could not travel to Tromso and I tried sending a lot of emails to the airline. They were not helpful at all and they do not refund the money. Every airline in the world is helping customers in every way they can by giving vouchers for another flight or even doing full refunds. But Wideroe doesn't seem to see that there is a world pandemic going around and decided to not change at all their policies. I will never use this airline in my life, and I definitely do not recommend it to anyone!
2/10

"not received the reimbursement"

Not Verified | We arrived on time for our flight from Bergen to Tromso, but were paged by the desk and advised that the flight was full and they would reimburse us a set amount per ticket if we took the later flight. We agreed and filled out the paperwork. After we were back home in the US, when I had not heard from Wideroe or received reimbursement, I filled out their online form and was contacted advising me that there was some information missing from the form I filled out in the airport, and they would see that the reimbursement was processed right away. It has been about a month and I still have not received the agreed-upon reimbursement. The flight itself was fine, but we would not have agreed to fly later if it were not for the offer of money back.
1/10

✅ Trip Verified | Completely disappointing experience! Our flight WF 623 was due to depart on 10.30 am from Tromso and to reach Bergen on 12.30pm. But the flight got delayed for 45 minutes to depart on 11.15 am. At 10.45, the aircraft arrived and we were informed the boarding would proceed as soon as possible. But a staff announced there would be further delay around 30 minutes at least due to technical problem. I saw several staff or engineering crew did something on the plane right engine. Later on, we were informed the flight will be delayed (again!) until further notice. Finally we got called to board on 12.30 pm (seemed like a good news, right?). As the plane was approaching the runway, the pilot announced the aircraft needed to return to base and unable to fly. We were diverted to flight on 17.00 and thank you Wideroe for your excellent service and top notch aircraft we could finally spend our another beautiful day at the beautiful Tromso airport for 6 hours and wasted our Bergen day. And hey, thanks for the free meal coupon! Props to Wideroe! My suggestion: buy a Boeing or Airbus, ok? Not an Embraer
1/10

✅ Trip Verified | I have been travelling from United States to visit Norway. After a stay at Tromso, I planned to visit Bergen for 1 day. I had planned my day accordingly as next I was leaving for Oslo. Being winter, day ends at 4.00pm. With my original timings I was reaching Bergen at 12.30pm but instead flight did not take off until 12.30pm from Tromso. This is super disappointing and annoying as now by the time I will reach Bergen, most of the tourist attractions will be closed. Please never book Wideroe if you are travelling from long distance and tight on our schedule. Not worth it putting so much money and complete waste of time.
9/10

First time I flew with Widerøe, did not know what to expect. The cabin crew were nice and safety demonstration good. Flying these small Dash 8 aircraft was actually not so bad, I've just been flying A320 and A321's so a small Dash8-Q400 was actually not so bad. 2x2 seats. Not much legroom for those who are 185cm and beyond. Seat do recline and quite much so that was no problem. The 400 series of Dash8 is noise regulated so inside, the propeller noise were not that bad and loud. Flying on short 50 minute flights you get a coffee. You just have enough time to drink that coffee and then they'll come and collect your waste. Landed before ETA, and left on time. The pilots also talked during the flight which can help people who are maybe a bit afraid to fly. Will fly with them again. 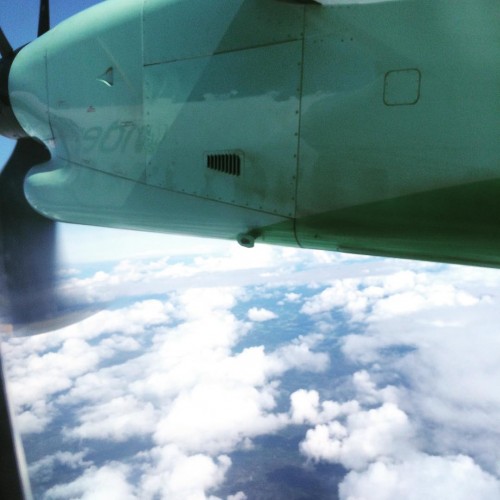 Booked whole itinerary from their website; flew Wideroe from Kirkesnes to Batsfjord return with two very short layovers. Good cabin crew with smiles safety features and cockpit announcements both in Norwegian and in English. Leather seats seat pitch varies free choice of seat. Buy on board menu and a toilet use for short flights only when plane is landed for a 15 min layover according to flight schedule. All in all professional flight experience. Also security checks in the airport made me feel comfortable and were handled professionally. Make sure that you book all flights to one itinerary as there might be cancellations due to bad weather in Northern Norway. Wideroe will then rebook you to next day flight and provide an accommodation.
10/10

I travelled with Wideroe from Bergen airport in Norway to Aberdeen on 16th April 2014. The check-in is managed by SAS and was very swift and efficient. The check-in staff were very pleasant and welcoming and made small talk which was a nice start to my journey. Wideroe use a Dash aircraft on this relatively short flight across the North Sea to Scotland. The gate staff were very efficient and this was more than matched by 2 superb cabin crew members who worked very hard and offered tea and coffee and a small snack in the form of a muffin. The seats were very comfortable. The downside for me is that my seat appeared to have been changed from the seat I had picked online. I ended up next to the engines and as a result I could not see much. The interior of the aircraft was spotlessly clean and good information was given during the flight. I will certainly consider using this airline again in the future.
1 to 10 of 15 Reviews