"Never again with Vueling for us"

✅ Trip Verified | Flight LPA-CDG VY 3184 on 25/11/2022 Departure time: 13:15. Very bad crew experience- flight from LPA (Gran Canaria) to CDG (Paris) VY 3184 - Not professional crew. 25/11/22. No catering on board for more than 4 hour flight. We had no information of that before the flight. If we had information we could buy a sandwich before the flight. I felt very bad, like I was going to faint, because I did not eat nothing in the morning and I was supposed to eat on board. The attitude of the cabin crew was not acceptable: 1st: they said to us that we had the info about the catering before the flight (we did no have it). 2nd: The cabin crew and the senior cabin crew were eating their meals in front of us in the galley and laughing, during this time and we had nothing to eat. 3rd: the cabin crew at the front had a friend in the flight and thy were talking every time with him loudly and laughing in the galley. This is not a good professional attitude. Moreover, the cabin crew at the back had an aggressive way to talk with passengers, he seemed bored to be here. Shame on him. Never again with Vueling for us. We like to go often to Canaria, and to Europe but we'll never take this company. We’ll take a real company with an experienced and trained crew, not this Vueling bus without crew in the cabin. Vueling should train their cabin crew about the behaviour to have on board and the way to talk with passengers. And the cabin crew should understand that we paid for a service and they are here because there is passengers paying. So we are paying them.
1/10

"I had to pay as a result of their mistake"

Not Verified | This airline is a scam. I purchased a ticket for a weekend trip with a friend. I had done this multiple days in advance, checked in, got my boarding pass, and even made it through security. While waiting at my gate I received an email that my booking was canceled, my booking not the flight. Even though I had a seat number and assurances from multiple employees that this was a mistake when I went to get on the flight I had been removed from the manifest with no explanation. After an initial call to Vueling headquarters, the people helping me were no longer able to get a response and I was left to go home with my entire trip canceled and the charge for the flight still on my card. While I was able to get the money for the flight back they will not cover any other expenses such as transport to the airport or cancellation fees I had to pay as a result of their mistake. The trip was also overbooked by around 8 people leaving me to believe they dropped me to make room for others.
1/10

✅ Trip Verified | Overbooked and denied boarding. After 5 hours wait, I got to the hotel with other 6 people. Compensation form fully automatic, eventually received a link after 1 month. But the link contains the wrong name. At this point it is impossible to contact Vueling. Just impossible to find an automatic answer within their automatic call center. I have already lost 1 hour of time trying .
1/10

Not Verified | We went to fly with vueling and had checked in luggage. When we arrived at Malaga our luggage was no where to be found. They told us we could buy necessities for up to 50 euros a day as we didn’t have anything with us now for our holidays. It is now two months later and they are still “searching” for our luggage. Above all we now also have to decide between either getting a claim for the lost luggage or getting a claim for the money we spend on necessities during our holidays. Not both. The amount of the claim will be based on the weight of our luggage, which is an insane way of calculating the worth of our valuable personal items. Costumer service is horrible, as if they are trying to make it as difficult als possible to claim anything for them. I feel horrible about losing my personal belongings, but feeling scammed makes it even worse. I’m never flying with Vueling again and would advise against everyone.
1/10

"Classical overbooking of an earlier flight"

✅ Trip Verified | Classical overbooking of an earlier flight to "pre-sell" tickets on a later flight with a less desirable time. When you try to check in early, they ask to pay for a seat or else they would refuse early check in. The app is confusing: when I tried to check-in early, it said that only a limited number of random seats are available (zero in my case) or choose a sear for a fee. The third option in an upper yellow box is go to the airport check-in. We were literally the first to arrive at the check-in and...entire flight was booked out. Stay in tune for my experience with their customer service trying to reclaim 2x250 euros compensation per EU regulations.
1/10

"So disappointed and angry"

Not Verified | Purchased my ticket at vueling.com and they booked me using Iberia. Now Iberia canceled the flight and they informed me but neither airline would refund my money. I have 6 passengers on that booking and they ripped us off. Tried requesting a refund on their web but they would refer us to Iberia while Iberia would do the same. Iberia said vueling have our money so they should refund it not Iberia. So disappointed and angry. 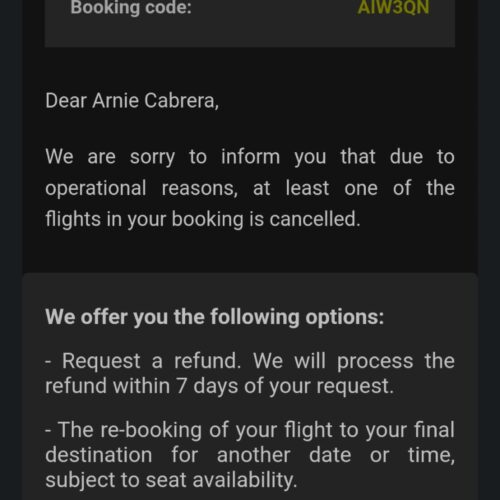 "mandatory masks on board"

✅ Trip Verified | Terrible Service. Very uncoordinated at the gates and mandatory masks on board, but it was not enforced. Had to spend money on masks at the airport after being denied boarding because of no mask.
1/10

"only recommend at a last resort"

✅ Trip Verified | Got to the check-in desk and gave in our passports and tickets, four of each. Explained that we had booked the extra seats, an option that is clearly available for anyone booking with Vueling on their website NOT on the app that I am aware of. The lady at the desk got told to off load the extra seats! We questioned this and was told by the queue supervisor that it was ok and we would keep all the seats. When we got to the boarding gate we checked again and they had no idea you could do this, one of the person's checking the tickets at the gate just turned round to her colleague and said I haven't checked anyone in, again another example of lack or good service as you could tell they didn't care and was told to check with the staff. As we boarded the plan we could see that Vueling had resold our seats. We explained to the crew that we had paid for the extra seats, not their fault but they didn't understand. We took our seats but still have lost our extra seat. The crew are trying to work it out and get and outcome to everyone's satisfaction. Then the captain came out of the cockpit and aggressively pointing at us making it clear to everyone on the plane that we had raised and issue regarding seating. After another number finger points and some none helpful words (as people do understand other languages), they decided to move the extra people to the row behind. No formal apology was given just a lot of looks and finger pointing. Just before we pulled back we were still waiting for 2 other passengers who were clearly late, but the captain made an announcement on the tannoy and clearly claimed that the very little (6 mins) delay of the plane was down to the seat problem (mainly that we had caused this problem) making it look like we had caused the problem. As soon as the late passengers turn up and sat down we were on our way, so I don't think our seat problem caused any delay. There was no visible checking of seatbelts and where bags were placed on the plane. After take off the crew the crew quickly closed of the front curtains and toilets. Such bad customer service. No comfort in the seats. Is Vueling the company I would choose for future traveling, probably not and probably would only recommend at a last resort and choice.
1/10

✅ Trip Verified | Unbelievably bad airline. They were understaffed at check in, and we waited in line for over 3 hours to check in (online check in was also not working). Then they lost my luggage. After jumping through all the hoops and filling out all the forms, they emailed saying they are "processing". It has been over 2 months since the claim was submitted, and they still have not provided compensation. They will not respond to emails, or answer phone calls. Awful company. I will pay extra next time to ensure I do not fly with Vueling again.
1/10

"Impossible to claim the refund for expenses"

✅ Trip Verified | Impossible to claim the refund for expenses due to the cancellation of my flight. They sent me an email recalling my right to obtain refund upon presentation of receipts relating to meals, accommodation, transportation etc.. After spending a very long time trying to find the right section on their website and calling their customer support, I haven't managed to get someone from the support. I only get a robot chat or a robot voice with no answer for my request. It's clear all is made so that it's impossible for me to claim back those refunds.
1 to 10 of 1155 Reviews