"This airline is horrible"

✅ Trip Verified | This airline is horrible. The customer service is disrespectful and useless. I had paid for an extra suitcase and when i got to the airport i had to pay extra for the suitcase i already paid for. As i was coming back, I was at the airport checking in online and it said i owned money for the suitcase I paid twice for. Due to problems with immigration, I had to change my flight and to change it was 110 per person, the lady on the desk said we can choose from 2 dates. I choose one of the dates and paid the money to change the flight. After 30 minutes, I was told that i couldnt fly the date that was chosen because there was no space and had to wait a month to fly. Why would they say they have space then charge the money just to say they dont have the space. Now i have to wait a month to get back to New York. After, I called volaris costumer service to see if I could get anything sooner and the 2 people i spoke to were extremely disrespectful. This is my first and last time flying with them, they made my vacation a horrible experience.
1/10

✅ Trip Verified | Worst airline ever! I was returning home, arrived to airport three hours early. Volaris changed the gate on us less than 20 minutes before with no text, no email, and the website was no showing that under flight status. The new gate was 10 minutes walking distance away from original gate. We missed our flight, to talk to a clerk it was two hour wait because it was half the flight that this happened to. Their response was that they don’t notify other than on the airport screens which are limited and are 32 inches. How would we know that, every airline sends flights changes via text, email, or updates on the flight status via website. The staff is so rude they treat people horrible.
1/10

✅ Trip Verified | Orlando to Guadalajara. Worst airline, worst customer service. They damaged my luggage and they said they are not responsible. They don’t care, they didn’t try to find a solution.
1/10

✅ Trip Verified | This was the absolute worst airline I have ever encountered. My son flew to El Salvador with our House Keeper to do charity work and they Lost or Stole his luggage. It never arrived at the airport. Volaris had no crew at baggage claim to assist him. We tried to do a Chat/Facebook and Email communication to get anyone to help us figure out how to help him find his luggage which had his medications and all his necessities as well as submitted a claim through the website. They had no phone numbers that led you to any individual humans. Absolutely no response to anything. My husband went to LAX to try and talk to a Volaris representative. He was there for over three hours trying to get anyone to assist him. The crew basically gave him the run around and never provided anyone to speak with. So now my 16 year old son is in El Salvador without any of his belongings. Had I knowns how awful this airline was I would for sure have paid whatever the extra cost was in flying with a reputable airline.
1/10

"forget to do security check"

Not Verified | The worst service ever, we passed TSA, Immigration, everything and right before boarding the girl at the front desk asked security to check on me and I didn’t even have a luggage with me, she let my daughter (minor) and husband passed but then they returned my daughter to check on her luggage as well. No using Volaris again, it was a headache and stressful time I didn’t need.
1/10

"told sorry the flight is full"

Not Verified | My daughter is a 7 year old unaccompanied minor. We paid for special services so that my daughter could be taken to the front gate and taken care of. Flight was at 11am. Her grandmother showed up 3 hours before the flight as told by employees. She waited in line. Volaris is extremely short staff and has a lot of inexperienced people working the line. Grandma told them she had special services and that she needed to fill out special paperwork. Not a single person knew how to help her and told her to wait in line. One hour passed by. It is now 2 hours before the flight. Grandma is still just waiting for help. She asked three times if she could have the paperwork to fill out. She was told no and to keep waiting. Then they sent her to a separate line and was told again to wait. An additional 30 minutes pass by and she tells them again if she could at least have the documents to fill out. They kept passing other people in front of her instead of helping her. Then they told her they had no one to take my daughter to the gate, and to keep waiting. Grandma asked again if she could at least have paperwork and documents to fill out and if they could at least check her in. She was told no and to keep waiting. Once there was one hour left, Grandma was told sorry the flight is full and there is no one to take her to the gate. Therefore, she missed her flight and they were unwilling to help even though grandma said she could take her. All they said is: Sorry we have no one to take care of her. To top things off, my 7 year old daughter is now stuck in Mexico, missing summer school, cheerleading practice.
1/10

Not Verified | The worst company ever. I went to go and request a flight change and they told me that it would cost me $200 to do so. My whole roundtrip tickets for 2 people were $250. How does that make any sense? And this was within 24 hours of my purchase of the property. Absolutely insane. The worst company ever. Will never fly Volaris again. Could've changed my departure flight, but instead, you lost a customer for life.
1/10

Not Verified | Worst airline in history. Missed my connecting flight due to a delay (which was their fault, not due to traffic or weather), and was redirected 7 times before reaching an agent to reschedule the flight. The “best” they could offer me was a flight 18 hours later with no compensation of any kind (keep in mind I just finished the first flight, so I’m in a foreign city with no hotel reservation or anything). I suggested scheduling another connection that would take 12 hours less and they denied the request due to a “rule”, which when I asked for clarification they refused to provide any. Also, since it was an international flight and I wasn’t allowed to check in my bag until 4 hours before departure, I had to carry all my bags around with me for those 18 hours after an exhausting 6 hr flight in a random airport. Do yourself a favor and never fly Volaris if you wish to stay sane.
1/10

"I will never fly with them again"

✅ Trip Verified | Never had such a poor experience time after time, worst trained agents at the desks and stations to let you into the plane. They don’t care about customers nor how much they paid to buy their flights and turn on top of that they penny pinch you for every little thing. Like asking you to pay for your carry on? Then after you pay they have a separate line for those that didn’t pay so you can still go in with carry on with out paying makes no sense. I waited in line like any normal customer for boarding, then as about to get in they said I needed that little piece of paper from immigration, it’s that they didn’t have any extras there so they told me I had to leave out of the airport, and then back through security. I told them I had my computer bag stolen a there in Mexico a few days earlier so to just let me fill it out in the plane or when I land in US. They says no, I then took off running like they said, can’t back drenched in sweat and they said I couldn’t get in because they cut off to board was 1:47 and it was 1:53. Meanwhile people were still boarding as I could see them going up the stairs into plane. Then they sent me to a different gate to get a new ticket for the following day, they charged me an additional $100+ to get a new one. I will never fly with them again. 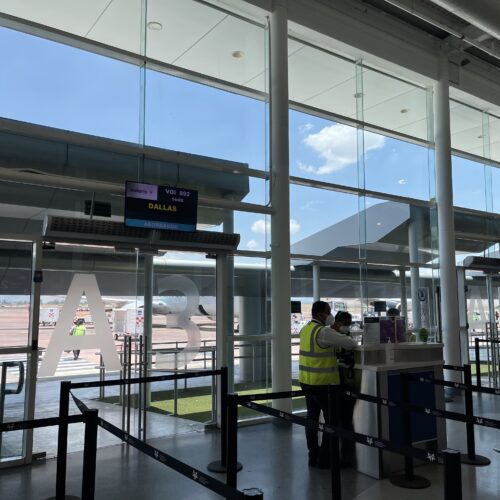 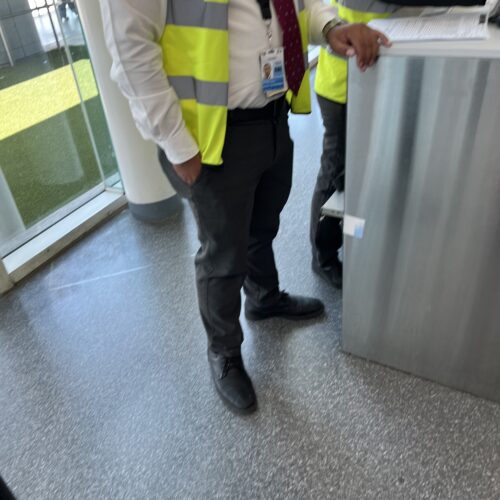