"Do not believe their promotions"

Not Verified | Monterrey to Guadalajara. Do not believe their promotions and prices. When you try to make your reservation there is a notification “we are sorry the price that you are looking for is no longer available”. They are doing false advertising.
3/10

"charge for bring your stroller"

Not Verified | New York to Mexico City. Worst experience. You pay a cheap airline ticket but in reality they make you pay more than you thought. They charge for everything!!! They want me to pay for a suppose "baby package" just to carriage my umbrella stroller but I refuse because last time I travel with them I paid it and for nothing didn't work. I never seen an airline to charge for bring your stroller and I was travel by myself with my 3kids.
1/10

"each experience was horrific"

✅ Trip Verified | Tijuana to Tuxtla Gutierrez via Monterrey. I'm with all the folks who would give this airline a negative star, if I could. I work at a non-profit organization, and we were taking a humanitarian trip with our interns, so we had a group of about 20 people. It was many of the kids first time flying, and they were already nervous about it. When we go to check in, the airline insists on weighing each person's bags together. I'm aware that the policy states a 10 kg weight limit on one carry on and one personal item, but I've never flown on a flight where they weigh the carry on and personal item together. Some kids' bags were at 7kg, and others were at 10.3kg and they wanted us to pay $50usd for the ones that were over. Of course we weren't going to pay for 10 or so kids' bags because they were a little bit over, so we start rearranging the baggage to spread the weight around more evenly. We also had one check-in bag that we had already paid $100usd for (and it was full of gifts for kids at an orphanage that we connect with when we visit), and they wanted us to pay again, even though we had the receipt showing we had already paid. Once we finally got our stuff reorganized to accommodate their ridiculous lack of logic (honestly, couldn't you just do the math and realize it all evens out eventually rather than being nitpicky?!), we were able to check in. At this point, they had to hold the plane for us about 30 minutes (and we had a connecting flight in Monterrey that we needed to make, and I'm sure many others did as well). So the kids start giving their stuff back to each other as we're walking...then we realize that they have another scale at the boarding gate and we had to go through the whole rigmarole again. Additionally, the "customer service" agents (if you can call them that - they were incredibly rude and impatient), insisted on charging us for the bags that were "over" (by .3kg) again, even though we showed our receipts. They held the flight for about an hour and half because they were very busy hassling us. I know it's probably because we were in a group, because they didn't weigh other people's bags as they boarded. I couldn't believe how ridiculous the whole process was. After we ended up paying for 3 of the kids bags (twice), we finally boarded the flight (which boasted a sorry excuse for leg room, no inflight entertainment, and no drink/food options whatsoever during the 3 hour flight). Because we had layovers each direction, we ended up flying with the airline a total of 3 times, and each experience was as horrific as the one mentioned above. THANK GOD we took Interjet on the last leg of the journey. I've seriously never appreciated an airline more in my entire life (and I've flown hundreds of times for business). On the way back to TJ, the kids had purchased some blankets, ponchos, etc. to bring back with them (which, retrospectively, we should have shipped...it would've cost less). That meant when we got the airport, and tried to get our boarding passes (which we weren't able to print in advance, and had to pay an additional $20usd for each), we had bags that were 1 or 2 kg overweight. We literally sat on the airport floor and threw away toiletries, clothing, books, shoes, etc. and moved items around bags to meet their ridiculous requirements, constantly weighing and reweighing the bags to try to avoid paying hundreds of additional dollars in fees. We were the last ones to board each and every flight because of their insane extortion.
1/10

"they changed our flight again"

Not Verified | Cancun to Hermosillo. They changed our flight from direct to connecting after we started our trip. Then we just happened to get phone service and see an email that they changed our flight again. This time with a 12 hour layover and no phone call, we're lucky we saw the email. When we called to ask about it as we saw it was now for an entirely different day, we were put on hold for hours. Then told that the flight was one again changed and our only option was to fly now and then stay in another airport for over 12 hours or fly in two days. Neither of which have a guarantee of not being changed again, nor do they offer any compensation for the time, the extra hotel night, or even refunding the money we've already paid so that we can pick up a separate flight with another company. So now we're rushing to turn in our rental car and try to make an earlier flight to avoid a 2 day delay. We built in one day for things like this but two days is absolutely uncalled for. You've been warned.
1/10

Not Verified | I have flown several times to the USA and back on many different airlines, but this by far was the worst airline I have ever travelled. Flight attendants super unfriendly, no leg room and I was made to put my tote bag under the seat in front of me, giving me no leg or foot room. I would never recommend this airline.
1/10

"Don't ever fly this company"

✅ Trip Verified | Tijuana to Mexico City. I have never been contacted as to why my ticket Round trip was cancelled and no attempt to give me a refund. It is a complete ripoff. Don't ever fly this company
1/10

"not allowed to board the plane"

✅ Trip Verified | Mexico City to Las Vegas. They are extremely rude and they don't know the meaning of customer service. I was not allowed to board the plane in Mexico City to travel to my place of residence in Las Vegas NV because I didn't have my Mexican passport. They failed to request passport during reservation and payment process, so I traveled only with my green card as I had in the past without any issues. I never received a warning notification during the reservation process or after the fact that this is a new requirement regardless of your legal status in the USA. They took my money and refused to refund it or give me a credit, they simply sold my seat again to someone. They also promote a low fare and when you checked out is a lot more money of what they are promoting. This airline doesn't worth your time or money. You will find better rates and better customer service with other airlines that will treat you as you deserved to be treated.
1/10

✅ Trip Verified | Tijuana to Culiacan. The big downsides are the booking process, multiple hidden charges and a bad customer service. First of all, the website seems to provide for online-booking and online-check-in. What the site doesn't tell you is that if your credit card is not issued in Mexico, the website doesn't accept your payment and ultimately your booking gets canceled.
1/10

✅ Trip Verified | I understand that budget airlines offer less amenities but politeness and fair business practices do not cost anything. I traveled with my family on a VivaAerobus roundtrip from Mérida to Veracruz and despite being a frequent flyer I have never experienced such bad service and bad business practices - I would recommend that family travelers stay clear of this airline. First I should state that we bought the most expensive tickets with every add on included, i was traveling with my pregnant wife and one year old infant (with a paid seat). First VivaAerobus wanted to deny us taking our FAA authorized car seat on the plane at check in, after an argument and being told to call service center for resolution - we finally were allowed to take it through receiving rude remarks while boarding, on the return the car seat was all of a sudden not a problem but we needed to pay extra for bringing this safety equipment for our child on the plane, despite payment the stewardess demanded that we leave the car seat when we boarded, saying the plane will not leave until we remove the sleeping baby from the seat, not until I started taping the conversation and the captain came and said everything was ok was the issue resolved. This is just the issue of one car seat I will not go into details about no help in dealing with seating together for the family or nobody being able to communicate in English, at least not when they wanted to ignore the customer.
1/10

"smallest seats I have ever tried"

✅ Trip Verified | Mexico City to Merida. The smallest seats I have ever tried to sit in. I was hit twice by luggage of other passengers and once by the vendors of drinks and snacks, trying to navigate the narrow aisle. Impossible to stretch your legs under the seat in front of you nor stand up to get out of your seat. To evacuate or exit, the passenger in the window seat has to raise the armrests and slide himself to the aisle. They continuously changed the departure time and listed the aircraft as on time. Very confusing to the driver who was to pick us up. An hour after our so called "on time " flight arrival time, the driver left since the flight supposedly arrived on time and he couldn't find us. 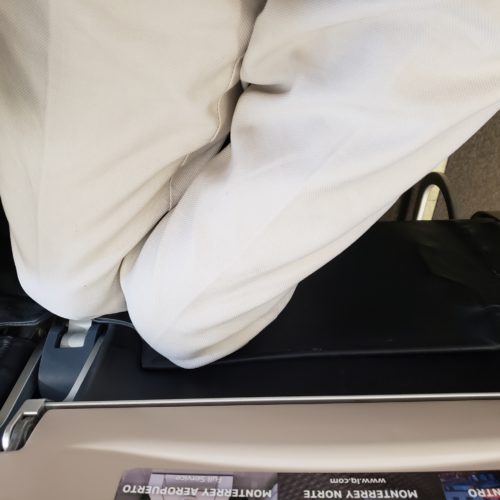