✅ Trip Verified | Mumbai to Delhi. The best domestic airline in India I have taken. Their cabin crew are the best, very friendly and professional. Their food, Wow! They have special packages for students, of which some domestic airlines in India I know do not have.
1/10

✅ Trip Verified | I am a gold tier member with Vistara and it is sad to see that their service standards going downhill. Yesterday I was flying from Hyderabad to Delhi with my wife and we were both booked on their Premium Economy class. I happen to have four upgrade vouchers which were given to me by a Credit card company which allows upgrade to the next class. Once I reached the airport, I told the check in lady that I had the vouchers and wanted to upgrade us to Business class and showed her the vouchers. She did not know what to do with them. She asked her senior to come and have a look and he said that she should call up the ticketing counter and check if two seats were available in Business class and to tell them that two passengers wanted to use the vouchers for this upgrade. The ticketing people said it was fine so they asked that my vouchers be sent across to the ticketing people to carry out the formalities so that they could issue us the new Boarding passes in Business class. At that time, two gentlemen wearing the uniform of Vistara approached the Business class counter and got themselves checked in to Business class. This meant that the last two seats available got taken by the crew and they tell me that they can no longer offer me the two seats as the Business class is full. I got upset and told him that he had already allocated the two seats to us and also spoken to the ticketing people so why did he give up these seats. He then lied to me that they had confirmed booking. If that was indeed the case then why did the ticketing people agree to give us the two seats? I conveyed my displeasure and told him that it makes no sense to be a Gold tier member and not be given priority to use these vouchers and they gave these seats to the crew who ought to have lower priority than the fare paying customers. He understood what I was saying and sent to the two gentlemen. Apparently one was nice enough to say that he would give up his Business class seat but the other person would not. They told us that we could consider taking up one of the seats in Business class. I declined the offer and told him that I would prefer to fly with my wife. As I was waiting for the check in, I also tweeted to the airline and explained to them what had transpired. They gave a standard reply that they would look into this and get back. Today a lady from Vistara reverted and apologised at the "miscommunication" between the ground staff and the controller. As I see it, there was no miscommunication and it was very clearly informed to me that we were getting the upgrade. To rub salt on my wounds, she gave a "wonderful" offer to extend a 10% discount on any one ticket for my future trip I might take on Vistara. She did not utter a word regarding the attitude of the crew who put self over the customer. I told her to keep her charity and I now intend to send them my four upgrade vouchers along with my membership card and stop flying this carrier.
10/10

✅ Trip Verified | Delhi to Hyderabad. A wonderful experience every time you travel by Vistara it's a happening experience. The staff is so professional and courteous, onboard food is marvellous. It's a value for money
10/10

"a great experience with Vistara"

✅ Trip Verified | Mumbai to Delhi. This was any first time flying a 2 hour long flight with vistara and was looking forward to their hospitality and service having flown them on short sectors. I was happy that that the airline is keeping it service standards high and maintaining it since day they started flying the seats in economy were very comfortable with great legroom and the plane was kept very clean.The staff from ground to cabin crew were the most kind and helpfull that I've ever met.. So overall ice again a great experience with Vistara.
10/10

✅ Trip Verified | Delhi to Lucknow. This was my flight with vistara after a long time, and their service has gotten better and better. They are the most environment friendly airline in India doing away with the plastic bottles and serving water in paper cups. The cabin crew specially announced the economy meal options with full details of vegetarian and non veg meals. For IFE they stream content to personal devices which is good enough.
9/10

✅ Trip Verified | Delhi to Goa. Vistara boarding in Delhi was super fast as they have a dedicated line for different levels of their card holders. Also they give you 5 kilos extra once you have a silver card which is very useful as it becomes a 20kg allowance. Boarding was 10 minutes late for which there was an apology by the captain once on board. Seat space is great. Had 2 empty seats next me as well. They served a full meal on board - not excellent, but not bad. Staff were very professional and helpful. Arrival on time and priority bags on the belt before I reached them. 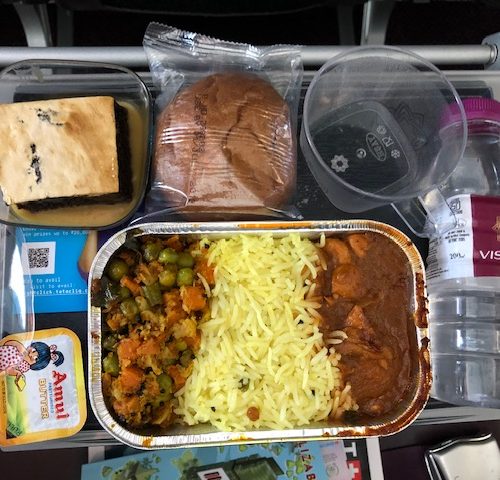 "Vistara is much better"

✅ Trip Verified | Pune to Delhi. It was my second flight journey and I was with my wife and 8 month old Infant. I went pune by spice jet and came back in Vistara so in comparison, Vistara is much better in all the things ground staff and crew member. First they had a seat belt for infant that other cheap airline do not have; second there are some special safety instruction for infant, in Vistara , the crew member asked me if I wish to listen instruction in Hindi or English and I choose English. This thing is very very important for me because if it is about safty of my Son I would like to listen in hindi only in which I am more comfortable. Again after giving me the seat belt for infant crew member asked me if I know how to use that and when I said no she helped us. Crew member and ground staff in Vistara do not behave like a Robots and that is very important thing
10/10

"definitely fly Vistara in the future"

Not Verified | Mumbai to Goa. I flew with air vistara for the first time and my experience with them was amazing. It was also the first time and route where this airline was operating a Boeing 737 instead of A320. Even though my flight got delayed by an hour but as soon as we entered the flight, the cabin crew had smiles on their faces and were greatly looking after their passengers throughout the flight. Would definitely fly Vistara in the future.
2/10

"seat belt without any instruction"

✅ Trip Verified | I was travelling with my 4 month old baby for the first time and chose Vistara for its good reviews and in-flight comfort but it turned out to be one of my worst experiences. The cabin crew handed me the infant seat belt without any instruction. When the flight started moving, cabin crew instructed me to feed the baby during takeoff but by that time my baby was frantic and started crying and I was stressed out. Had the instruction and been given bit in advance, I could have prepared so to avoid inconvenience to my baby and fellow passengers. No clear instruction was given about how the seat belt has to be tied for an infant. A cabin crew came to inspect the seat belt before takeoff, she said it has to be tied around the infant and attached to my belt but did not wait to see if its been done correctly.
10/10

"One of the best airline"

Not Verified | Delhi to Srinagar. One of the best airline. Very friendly staff unlike other domestic carriers. Smooth transition right from check-in to boarding. I will recommend this to everyone.
21 to 30 of 119 Reviews