Ho Chi Minh to Phu Quoc with VietJet Air. In the last two weeks we have had 3 internal flights with this airline and every single one has had delays by a minimum of 2 to 3 hours. The staff are very friendly but I find it very disorganised. On this latest flight we received an email that the flight was being delayed from 3:15 to 5:15 which we were able to accommodate for but not informed of a further delay until we were all waiting to board at 5:10. In each instance, the reason given has been due to a late arrival or technical difficulties. I have very little confidence in this airline as we have one more internal flight to take in order to get two connecting international flights back home. Hopefully we will not miss them due to the flights always being hours late.
8/10

"service on board was very good"

Hue - Hanoi - Hue. November 2016. Very cheap tickets, new, promotional route for Vietjet Air. Flew on new A320-200 aircraft. Flights on time, which surprised me as VJ are often delayed or “rescheduled” in Vietnam. Managed well a family of 4 with lots of luggage. Check-in fast and they were not picky on carry-on luggage and inscribed luggage allowance – likely because of new routing being promoted. Bus gating in both airports, but everything was efficient. Service on board was very good, aircraft clean. FAs are quick, presentable, young, and devoted. Lot of food, drinks, and items are on sale on board for reasonable prices. 1 USD for coffee with free refill. What annoys me is that pricing is extremely intransparent and appear dishonest with so many additional costs and taxes for everything. If you have paid for luggage and you change departure you must pay once more and loose what you already paid for.
7/10

"good service on board"

✅ Verified Review | Ho Chi Minh - Bangkok - Ho Chi Minh. October 2016. Cheap flights, new A320-200 aircraft. Both flights briefly on time, which is rare for VJ when flying domestic with them in Vietnam. Obviously they pull up their socks when flying international - a good effort. But lack of airbridge in SGN (lengthy bus rides!) makes it cumbersome. In BKK they are bridged directly to gates like a legacy carrier. Got three confusing and useless emails from Vietjet Air in the weeks prior to departure where they announced time-changes, but after carefully crosschecking there were actually no change. So why submit these disturbing emails? In Saigon, there apparently were two different departure times for the same flight which time was inconsistently announced at airport monitors. Good service on board, young, fresh, energetic, positive crew, overcoming a lot in the less than two hour flight. They were, at costs, serving drinks, hot and cold food. They provided shopping options for VJ-souvenirs, and for shopping luxury goods as well. Smooth check-in: in both instances it took me less than 5 Minutes to accomplish. Not so fuzzy with luggage, I had several kg overweight but got away with it. Plenty and clear announcements from the captain. No IFE, no airbridge, long bus drives, but altogether good value for 120 USD spent for this trip. Major problem is when transitting and connecting to and from other carriers as VJ have no transit counters or options. That means, you have to pass customs, immigration and re-enter immigration and security when using them for connecting flights – even if you have no luggage, you have to walk miles and use an hour for this nuisance. Legacy carriers obviously in this way try to freeze LCCs out of the ballgame.
2/10

✅ Verified Review | Ho Chi Minh to Hanoi. VietJet Air is always delaying flights. this time, and they didn't allow me to check in cause I was 3 mins late - had to pay 20$ per ticket to have the next flight. While waiting for boarding in the hall, I could see my primary flight boarding (of course this flight was 30 mins late). At the end, on the way back, they send me an email 4 hours before the flight, to say that its delayed 2 hours. Have to take the flight at 0:10, and arrive in Ho Chi Minh City at 2:05 - you enjoy work the day after.
1/10

"had a horrible experience"

✅ Verified Review | Hanoi to Danang. We had a horrible experience with Vietjet. We called to ask a question about our ticket, and the sales rep told us that we wouldn't be allowed on the flight because our middle names were on our passports but not on our tickets. They didn't have any notices on the sign up screen that you had to use your middle name (which in the states is not a common thing to do). We had to pay 30 dollars in order to change the names, and it required photocpying and emailing our passports to them, and waiting for over 1.5 hours on hold. Moreover when we arrived at the checkin counter, we found that the payment counter was actually across the hallway. We had to pay once again for our baggage, but the woman didn't tell us until after we had walked to the payment counter once already, meaning we had to make the trip twice. Nothing individually was horrible, but it was just a really unpleasant experience in general. We also flew with Vietnam Airlines and Jetstar and both were much better. The added cost for bags / names wasn't as much of a problem, though we ended up paying about as much as we'd have paid booking with a more expensive, more enjoyable airline. What we disliked was losing so much time dealing with an inefficient, confusing, and frustrating airline.
6/10

First time flying on the LCC from Singapore to Saigon. Checking in okay, but be aware of your baggage weight as it could cost more on the day, boarding good with FA assisting in storing hand luggage. The flight left slightly late but made up time and we arrived on schedule. Seat comfort and leg room Ok for a short flight, 1-2 hours could be a problem for any longer. No IFE, food and beverage had a good selection - we had a hot drink and peanuts with payment in SIN $, although with international flight the cost of items are double. If you don't expect much then that's what you will receive. 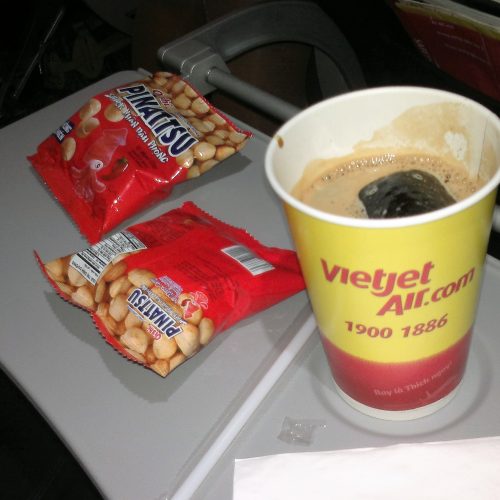 Phu Quoc to Hanoi with VietJet Air. A disaster - I wish I had booked another airline. We booked 3 internal flights during our Vietnam tour - all 3 flights were delayed / cancelled. First time was a couple of hours in advance, received notification in advance, no problem we understand. Second time, I received notification of flight being delayed with over 6 hours then additional delay time at the airport. We were supposed to arrive in Phu Quoc at 10 am and we landed after midnight with two little kids. The third we were supposed to leave Phu Quoc at 1pm and received phone call at 8.30am same morning that the flight has been cancelled and there are no other flights available. Were put on flight the day after but obviously having been advised just couple of hours before our pre-booked train and hotel arrangements for the same day had been fully charged not mentioning the additional night stay in Phu Quoc. Terrible service at contact center with absolutely no solutions offered. Watch out if you would like to leave on time.
2/10

"a less than budget service"

✅ Verified Review | The first leg of my journey was from Hanoi to Bangkok. That was okay, except they changed the departure time from about 11.15am to 13.05 pm and even then the departure was delayed a further 30+ minutes because of the late arrival of the aircraft. To the credit of Vietjet on this occassion they advised me by email of the change of flight time and I could prepare myself however because of the delay I missed my connecting flight from Bangkok. The second leg of my journey was the return flight from Bangkok to Hanoi which was scheduled for departure 14.15pm. I arrived at Bangkok Suvarnabhumi Airport early at 11.30 am only to find that my flight had departed at 10.15am; four hours earlier. I received no notification of change of flight detail either by email or phone. As a consequence they re-routed me to Hanoi via HCMC on a Vietjet plane supposedly leaving Suvarnabhumi at 12.30pm. Typically for Vietjet this was late arriving and did not depart until almost 13.30 pm. I arrived in HCMC and was pre-booked on a Vietjet flight to Hanoi departing at around 17.30pm. As usual for Vietjet this flight was delayed another 30 minutes. All of this messing about simply because Vietjet did not inform me of the change of flight plans as they are required to do. I have since learned that Vietjet has an extremely poor reputation for poor customer communication and flight delays or rescheduling. Never again will I fly Vietjet or recommend them to any one else. A budget airline with a less than budget service.
6/10

"a good price for 2 hour flight"

✅ Verified Review | Yangon to Ho Chi Minh City return. Check in was smooth at both airports. They are not very strict on 7KG carry on bag rule. They tag the carry on. Yangon to Ho Chi Minh crew looked tired but Ho Chi Minh from Yangon crew were really energetic. The seats are ok for a budget airline. No power supply at the seat. I ordered food in the menu which was really tempting in the outbound flight. (The menu has a chewing gum stuck, so that was disgusting. The crew should really check them as those are the money maker for the airlines.) However, the food was disappointing. The Thai fried rice I ordered was dry had so small a portion that I finished it in five spoonful. Most of the drinks in the menu are sold out. I didn't order any food on the inbound flight. The crew worked in a quick and efficient manner. They are provided fast services. Not quality but it is understandable for a budget airline. Overall it is a good price for 2 hour flight.
1/10

✅ Verified Review | Ho Chi Minh to Phu Quoc return. My family had to be airport for more than 7 hrs as the flight from Ho Chi Minh to Phu Quoc flight was delayed 6 times. And now we are at Phu Quoc airport and the flight is delayed again for 3 hrs - so far. Vietjet sent us the message about the delayed flight 2 hours before the flight- and we are already at the airport as we supposed to be here 2 hrs before the flight. I asked the Vietjet staff but she could't give me the right answer. This is ridiculous and unacceptable.
391 to 400 of 447 Reviews