Not Verified | Currently sitting on a completely booked flight. I am part of a family of 6. Instead of seating us 3 and 3 as the rows would allow, we were placed 2,2, and 2 leaving us sitting with a stranger in each row. There was clearly no thought process in this arrangement in an already suboptimal experience. We fly very frequently and had heard United was complying and doing more than their part to make sure the COVID era was as safe as possible. This was far from the case. Would not recommend. Delta is superior in all aspects.
4/10

"one of them was so nasty and hateful"

✅ Trip Verified | The staff was in general very nice to me and my little kids. But one of them was so nasty and hateful to me and my little kids who didn't cover their nose with their mask for each second... [which is not understandable in first place - why kids in the age of 3 and 4 years have to wear a mask] - what are they expecting from those little kids? they don't understand the need of wearing a mask, its so uncomfortable for them and they pulling it every few minutes. This nasty one was at my seat latterly every 2 minutes to scream on me why my kids are not covering their nose with their mask! I understand that we must take caution to keep us safe and healthy, but we need to do it normally. and what she did to me and my kids is totally unacceptable! I was on a night flight, and my kids tried to sleep, but with this mask on their face which is almost covering their eyes, it was impossible for them.
1/10

"does not appear to care at all"

✅ Trip Verified | United Airlines does not appear to care at all about it’s customers as people. One would think that during a pandemic when air travel is way down, they would do their best to provide a high level of service. Their best is apparently not very good. They can’t bring a flight in on time to save their lives. Why? Why is this inconvenience and frustration acceptable in this industry and no other. Rest assured, United Airlines will do nothing to ensure you arrive at your destination as advertised. Consider your arrival time as a very rough estimate that likely means you’ll get there on that calendar day but whenever it fits into their schedule. Terrible!
1/10

"Fly with them if you want to be mistreated"

Not Verified | Our first business class experience with United made sure we won’t ever fly with them again. SFO to Cabo flight was delayed for 4 hours. Coming back we were seated away from each other amid our timely check in the day prior and a phone call we placed to confirm we will be seated next to each other. Throughout the SFO-Cabo flight, half the business class was wearing their masks and the crew did not care to remind. On the way back, their family separation tactic made sure more people can spread Covid. When we asked what was the reason of separating us after our confirmation, the come back was “I don’t think you are listening to me carefully. You have 2 choices, either talk to the gate agent or you can leave on another plane at another day”. Proven United Airlines have excellent code of ethics and employee training. Fly with them if you want to be mistreated, yelled at, or forced to sit next to a potential Covid carrier.
1/10

"4 hrs being harassed by this woman"

✅ Trip Verified | Had the rudest, aggressive and combative head flight attendant ever! I had just sat down for 15 secs when she started in on me. Apparently she had just been at it with my seat mate. 4 hrs of being harassed by this woman. It's one thing to be nice and friendly, it's another to be treated with an attitude that will not stop. I put the tray table down with my legs crossed, that was not Ok so I stopped. My legs were cramping so I stretched them out in front of me That was not OK, so I stopped, they told me it due to COVID. I asked "Do you not disinfect the plane between flights, that's what the ad said?" She started fumbling for words. Not the yes or no answer I was looking for, I asked for her name but the junior attendants did not want to give it to me, so I went and took their pictures. Right before landing, she comes by and stands right in front the exit row seats that have been blocked off (we were just behind that row) and starts spraying disinfectant. The over spray landed on our faces and hands. I was lucky to wear glasses but my seat mate got some in his eyes too. She did not say a single word, just started spraying. One would think that the flight attendant would say something like "I need to be cautious and spray so an you please cover yourself." I guess I got my answer as to whether United disinfects between flights if she's spraying, but on the ad it looks like professional grade, not just a household spray bottle. But that is not the end of it. I'm not sure what yarn was told but as we are getting ready to open the door and deplane, there were two officers and two United Reps waiting to escort me off the plane. I was fortunate to have a great seat mate who had also endures and witnessed the whole thing. I am very thankful and grateful that he did not hesitate to be my witness and give his accountant of the circumstances. It was really unbelievable! Just beyond the pail and this is the head main cabin flight attendant who is suppose to be at least neutral instead of having an axe to grind.
1/10

"taking no precautions whatsoever for our safety"

✅ Trip Verified | Flying United Airlines is dangerous and they don't care about your safety or health. They put profits over passengers. The flight I was on was 100% full, no empty middle seats, no social distancing whatsoever. Many of the passengers didn't even have on masks. I got off the flight because I was not going to put my health at risk for Covid. It was astounding and unconscionable that they would not fly at a lesser capacity to assure the safety of their customers. Clearly greed was more important than my life as a paying customer. I will never fly United again. I was forced to lose a day of work, to get rebooked on a less full flight but even then they said it was just the roll of the dice and if it filled up, tough luck. They were taking no precautions whatsoever for our safety and protection in terms of the crowded flights. They said they wiped the plane down but shouldn't they do that anyway? Don't they know that Covid is airborne. Shaking my head in disbelief and outrage. They didn't even offer a hotel voucher and refused when I asked. So I was asked to either spend more money, miss work and be inconvenienced or risk my life and health to fly on a small, packed plane with no social distancing and a serious lack of wearing masks because they are too greedy to schedule additional flights so they can fly with a less crowded plane. It ended costing me twice as much as the ticket I originally purchased to be safe. That was not my experience on Delta, Jet Blue or Southwest where the flights respected some social distancing and they were strict about mask wearing.
2/10

"pack the planes during the pandemic"

✅ Trip Verified | I am a 1k, million miler and global services level 6 times with United. I am changing to Delta. United does not care about employeeS or customer safety. They only want to pack the planes during the pandemic. They fill every middle seat (including exits next to 1K). By contrast, Delta does not the Delta plane I flew 2 weeks ago appeared much cleaner also. I am switching loyalty after 20 yrs with United.
1/10

✅ Trip Verified | Worst experience. Really very bad experience, never fly again with them. No social distance, no empty even one seat they don’t car about safety. Was too late to change my schedule and plans. Bad bad bad. and the crow was very Rude. Never again with United Airlines. 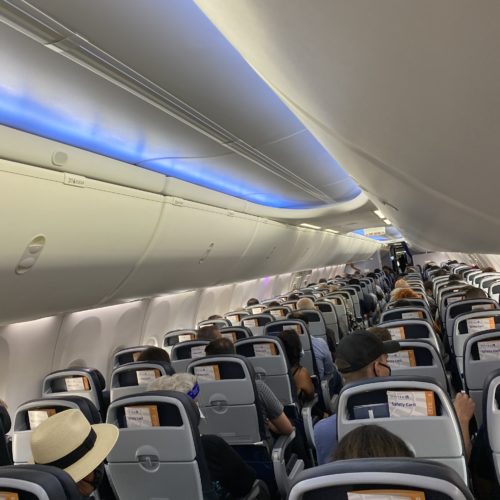 Not Verified | Worst experience. No social distance. Was emailed the night before about having full flight. Was too late to change my schedule and plans. Bad bad bad. Do not care about safety
3/10

"not having the staff to fly the plane"

✅ Trip Verified | They changed the gate many times thru the day and then delayed the flight due to United not having the staff to fly the plane. They had to call in people at the last minute. They delayed us and hour and a half and then when we got close to boarding they didn't know if they had pilots. When we actually got to load the plane we got everyone in the plane and then they made us all get out and move to another plane down the concourse. What was supposed to be a mild delay is now over 3 hours.
341 to 350 of 3753 Reviews