✅ Trip Verified | Excellent flight with TUI on the Dreamliner between London Gatwick and Barbados. Check-in was a breeze and queue not very long. Boarding was done by rows, which seemed to help with congestion. Seats were leater, which were ok for the flight duration, seat back screen clear and had the latest films and entertainment. Cabin crew were friendly and always on hand to get a new drink or answer any questions. Two hot meals provided on this 8 hours flight, one large and one small, which was nearly the same as what we received with BA on a 13 hours flight! Impressive! Captains were great and very informative, it was also nice having them come on the PA mid-way during the flight to provide an update on the conditions and how we were progressing, which doesn't happen that often any more on these flights. I would have no hesitation in flying TUI again.
10/10

"excellence of her performance"

✅ Trip Verified | Stansted to Las Palmas. On January 29th I sustained an injury to my leg 5 minutes before boarding the aircraft caused by a rack of 3 wheelchairs striking my shin heavily as it was pushed away from the aircraft door along the narrow passageway by a Stansted employee. I was seated in an opposing wheelchair using assistance provided by the airport. On impact which caused me to cry out with pain and and the staff did nothing and continued on her way. On entering the cabin with great difficulty the Cabin Manager assessed the situation and seated me in the first available seat and applied a pack of ice to the injury. She carried out first aid throughout the flight raising my leg and applying ice and compression also as she could see I was somewhat shocked. Her care was exemplary and greatly reduced the bruising and severity of the injury. I didn’t secure her surname but I wish you to note the excellence of her performance. Consequently I have minimal swelling and bruising and discomfort so am able to continue my holiday. Many thanks to her!
9/10

✅ Trip Verified | Departure Airport - Firstly, an overview of the airport. We were checked in for our flight so quickly as we were called to an empty lane at CMF (their queues work differently there!). The staff were chatty and friendly. You are advised to go through security once called as there is not much on the other side. The queue was a bit long but we got moving within half an hour. After boarding, we had 20 minutes to relax until pushback. THE FLIGHT took off, and it was only five minutes late - rare that a TUI flight I go on is on time. The cabin service soon followed, but the rear trolley had to return to the galley as we had a lot of turbulence for the first half an hour. We descended and that turbulence went. The back trolley was back in service and we ordered our food. Unfortunately, they only had a bacon baguette or a ham and cheese toastie - in small numbers. Luckily, we were able to get two bacon baguettes. They were yummy, but a bit expensive. After that, there were final checks for the descent into Manchester. We were served well by the crew. Arrival Airport - We landed nice and punctual, but a little bottleneck happened as it said 'All bags will be delivered before 14.50'. Well, a little lie there as I only had one of my three bags by 14.50! The belt stopped and started again and we finally got all our bags around half an hour later. All in all, a really good airline, would fly again, but side note: they removed the seatback pockets and made this little storage area behind the tray table (when you see the photo below, you'll understand what I mean), where they put all the magazines and safety card. 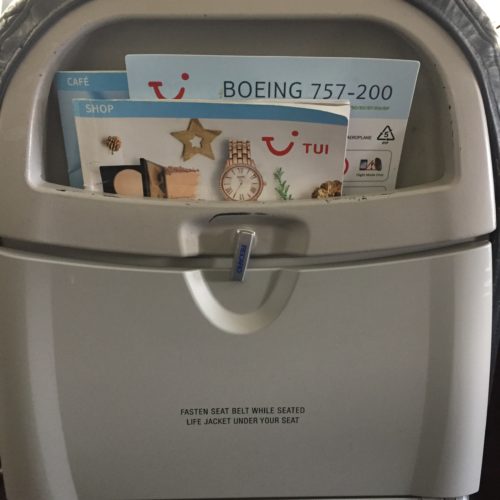 ✅ Trip Verified | Barbados to Birmingham via Gatwick. Absolute chaos in both Barbados airport and onboard plane. In the airport terminal the flight was displayed as going to Bournemouth with the BHX flight number. We were advised the plane was taking some passengers for Gatwick due to operational reasons once on board. The staff on board did not appear to know how many passengers and two were also in accounted for. Hence nearly 3 hour delay. The accommodation in premium economy was comfortable and food and drink was good. The pilot did warn us to expect turbulence due to weather conditions. We needed to fasten our seatbelts for a good proportion of the journey. The Boeing 787 is comfortable with lots of overhead storage space but not enough toilets. When the cabin crew were advised -prepare for landing we appeared to be circling round for some time when the captain announced we were unable to land due to snow and closure of BHX. He needed to communicate regarding where was safe to land. We eventually landed at LGW some 3hours after original ETA. I appreciate we landed safely and of course am grateful for this. However upon landing we had to collect luggage clear customs and were given a £5 refreshment voucher which we barely had time to use before being herded on to coaches back to BHX. We left between 08:30 and 09:00. Conditions on road were extremely hazardous in snow. The journey took 10 hours and we eventually arrived back at BHX some 14 hours after original estimated time of arrival. As a result I lost my paid for taxi and had to stay in a hotel overnight prior to completing my journey home. Had chaos not ensued at the beginning of our journey we may have landed on time prior to closure of BHX
51 to 54 of 54 Reviews