Transaero Airlines flight has been cancelled in last minute. I have booked round trip, and got cancelled both trip from Moscow to Istanbul and Istanbul to Moscow. Never experienced this problem before. All my plan have to change and cancel.
2/10

"do not expect smiles"

The only good thing about Transaero Airlines is that seats are comfortable and the price is competitive. There was no IFE, and Moscow-Phuket is 11 hours. The food was terrible, there is no alcohol allowed on the flights, you can't even pay for it! There's water, Sprite and juice. Cabin service is efficient at best, but do not expect smiles. On the ground it's ten times worse - we weren't listed on the flight for the last leg of our Phuket-Tel Aviv flight. It took them 1.5 hours to correct it, and then I was given four boarding passes, none of them next to each other. We were travelling with two young girls! The ground crew shrugged their shoulders. I had to ask the passengers who would switch so I could sit with 3-year old, that's how useless they were. I would never fly them again. All flights were late (30-90 minutes) with no explanation given.
1/10

Flight from Milan to Moscow was delayed more than 6 hours with no explanation (already it was 2 hours on the way in). Arrival in Moscow by night around 5am instead of expected 10.30pm the day before, with all the associated problems. Complete absence of simple customer care and compensation. Bad behaviour of ground Transaero staff (and airport staff as well) which got angry at people because they complained. I'd better go by foot than fly again with this company.
1/10

"delays without any reason"

Food is horrible. Served the same rice in breakfast and lunch. Soft drinks are served without ice. No alcoholic drinks served in economy class with or without payment. Flight delays without any reason. No compensation for delay even if it is more than 5-6 hours. In-Flight entertainment in Russian language.
4/10

Our flight from VIE-Delhi was alright. An immense 15 hrs waiting time for the connecting flight though. Service is minimal, food is minimalistic. Our flight back from Delhi was actually ok. The AC seems extreme, the food was more in quantity but less in quality. Our 10 hrs for the connecting flight back to Vienna turned out to be 13 hrs. Almost every flight was delayed 2.5 up to 4 hrs. This airport aims for "international", however the amount of people in the shops and food courts who speak English is almost zero. Please, Transaero, improve your quality.
6/10

A long check in line at Domodedovo airport in Moscow. Flight was delayed for 3 hours while the plane B767 was repaired. Inside the plane was a small distance between the seats. The ticket price was very cheap so I cannot complain. Food service was only water with cookies and there was no entertainment system. 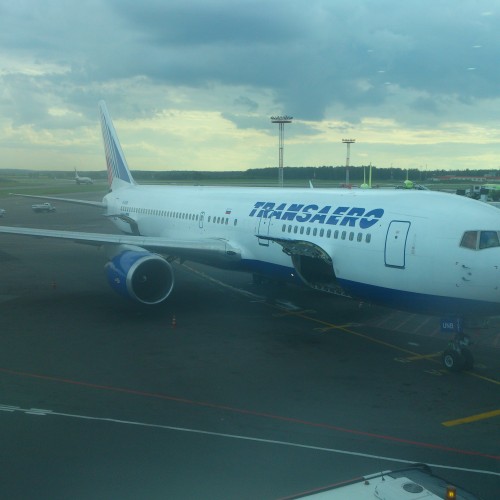 I was on a short hop from Kiev to Moscow. They called it discount class flight. The price tag was well over what Aeroflot and other legacy carriers asked but I needed to be late night at Domodedovo so bought it. The check in was polite but was informed about recent hand baggage rules change: they demanded to pack my backpack into a hold bag and to proceed to a plane with laptop bag only. When onboard was shocked with the seat pitch. Ryanair looks generous after that overcrowded accommodation. You have literally no room to seat plus passengers can recline leaving you no room even to move. The snack service was pathetic with peace of bread in plastic. Crew were polite but not up to other airlines standards. The plane was old. The toilet was smelly. Deplaning in Moscow was via bus. I used to be their loyalty program active user so accumulated some miles. Trying to used them I was unable to book reward ticket via website. This option leads you to a error message on the payment page. Overall overpriced and substandard. Not recommended.
8/10

Jan 2015. From TLV-VKO-ALA / TSE-VKO-TLV. All flights on B737-800 but the last flight to TLV onboard B767-300. Food is really pathetic I'm usually not picky with airline food but this time all 4 segments were awful in quantity and quality. Flight attendant mostly nice and accommodating. The flight from VKO to ALA was on a brand new B737-800 with IFE and WIFI so it was much fun all the rest 3 segments were without IFE. Seats are leather and quite comfortble. Flights departed mostly on time despite de-icing in every station but TLV. Fare was good VKO airport new and welcoming. All in all a good deal.
7/10

PEK-VKO-TLV-VKO-PEK flew with a premium economy seat. Online check-in was a bit painful due to age old software but the airline staff at the counter were excellent to resolve the issue and made a smooth check-in for us and offered an emergency exit seat. I knew before hand about the poor in-flight entertainment so I carried an iPad with several movies and music in it. Cabin crew were on par with other airlines and spoke very little English which wasn't an issue at all. No wine or alcohol being served in the cabin but the generous flow of fruit juices candies and chocolates made my travel bit comfortable. I would definitely fly them again.
1 to 10 of 55 Reviews