"price alone will not judge its success"

✅ Verified Review | Shenyang to London Gatwick via Tianjin. A new route recently opened between London Gatwick and Tanjian, and as a regular traveller between the UK and China, I felt it was worth giving it a go. The initial pick up from Shenyang was easy enough. A small domestic flight between Shenyang and Tianjin. As my flight to London wasn't until the following morning, Tianjin Airlines would provide 3 star accommodation for the night free of charge. Whilst this was communicated during the initial booking, no details were given in an email. I arrive into Tianjin with a man telling me to ring this number for the hotel pick up. The process was badly organised. The hotel did not speak a word of English or very broken English. I was told that the hotel was full and no rooms were available. There is no visible desk for Tianjin Airlines within the airport at Tianjin which I find ludicrous. I relied on a local tourist desk for help. Eventually, I found my way to the hotel, where again I was told no room or I would have to pay 350 RMB for a room? Eventually, another passenger was experiencing the same problem and spoke perfect mandarin. Crisis averted! Overall, the experience was very poorly managed. No clear visibility at the airport and unclear instructions. The hotel room was pleasant enough, similar to an Ibis or Travelodge. Clean with air conditioning. When booking, the website clearly advertised the route as Tianjin to London Gatwick with no stops. (Bar internal domestic flight from Shenyang). In the end, we had to stop at Chongqing for two hours. The main flight to London Gatwick was standard long haul. Unlimited water and soft drinks. Chinese style food with a snack. The drinks service was given after the food service, which I found strange when compared to other providers. The food was okay. The inflight entertainment was terrible or non-existent. Normally long haul flights will have a good selection of international films. Everything was pretty much Chinese except for the IT Crowd. So random! For an 11 hour flight, you need a decent selection to pass the time. The flight itself totalled 34 hours travel time. I normally pay between £540 - £560 with China Southern. Total travel time is normally around the 26/27 hour mark. The new route between Tianjin and Gatwick only cost £335. If you book earlier, you can sometimes get it for £275 one way. Perhaps the amount you pay is reflected in the experience. Overall, with no flight delays and a competent service, the new route between Tianjin and London Gatwick, offers good value for money. However, the difficulties encountered in communicating the hotel, diversion to Chongqing (not highlighted on website) and lack of in flight entertainment for European customers lacked the finesse rival airlines provide. If the new route is to succeed, price alone will not judge its success. The carrier must provide a like for like experience considering the nature of other long haul providers offering a more well rounded experience.
9/10

✅ Verified Review | Tianjin to Changsha and a great experience flying with Tianjin Airlines. Check in was fast and smooth. Crew onboard was pleasant and friendly. The flight was about 2 hours but was diverted to XIY due to the de-icing system was faulty. After the plane landed in XIY I received a message stating that the plane to take off for CSX is scheduled again at 12.30PM which meant an 1.5 hour wait. Down side of the airline was no complimentary food and water was served on the ground. At about 1PM the plane took off again for CSX. Although the experience was not what anyone expected the crew and the airline had done their best in giving the earliest possible take off time. As what I noticed that they had changed the aircraft for the XIY-CSX leg. 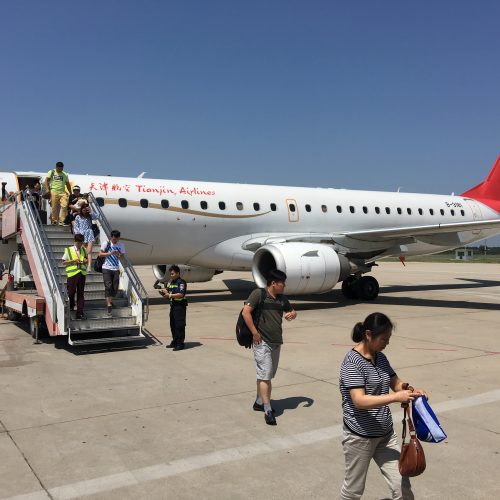 Have not flown Tianjin Airlines for a long time - had no choice as they are the only ones flying between Shenyang and Mudanjiang. Disaster - departing flight half an hour late returning flight 3 hours late due to "mechanical problems". Nothing to eat nothing to drink and then saying we apologise for the delay because of the aircraft being late - statement of the year.
9/10

Never heard of this airline until I flew in July on Embraer 190 from Tianjin to Ningbo but impressed by service standards. At the airport the check in and boarding was quick and efficient and FA's were very attentive. Okay their English language skills need improving but never seen such an efficient and smiling set of FA's. Seats comfortable for this quite short trip meals was also good - lack of newspapers though. Will fly them again in September and would have no doubts about recommending them to others as a must-try airline.
9/10

Never heard of this airline until I flew in July on Embraer 190 from Tianjin to Ningbo but impressed by service standards. At the airport the check in and boarding was quick and efficient and FA's were very attentive. Okay their English language skills need improving but never seen such an efficient and smiling set of FA's. Seats comfortable for this quite short trip meals was also good - lack of newspapers though. Will fly them again in September and woulkd have no doubts about recommending them to others as a must-try airline.
11 to 15 of 15 Reviews