"our direct flights was cancelled"

✅ Trip Verified | At the last minute our direct flights was cancelled. That's what happens, and is okay with us. However our new tickets now have a layover in Bangkok for close to 2 hours (Which is the total flight time in the first place) Our only option is only to cancel the flight. But since this change came so late it was not possible to book other tickets. We asked to somehow be compensated, but the message was clear: even though we have made your trip significantly longer, we are unable to meet anyone of your requests. I find it very unsatisfactory that an airline have the power to just don't care about their customers, and refuse to help in any way. Had this flight been departing from EU we would have been entitled to compensation. I find it very hard to fly with Thai Airways again.
9/10

✅ Trip Verified | We flew Thai Airways again. This time from Bangkok to Tokyo Narita by economy class. The check-in was not good because of staff shortage and it took us about 1 hour for check-in (even though we did make check-in online). The flight was on time. The service by cabin staff was very good even though we were seated in the rear of aircraft. The food was good and tasty and we were given 2 bottles of mineral water during flight. The flight was smooth and we arrived a little late due to traffic at Narita airport.
8/10

"promptness and attention of crew"

✅ Trip Verified | Only words of gratitude for the promptness and attention of the crew to the passengers. Departed on time, back from Bangkok late for 1.5 hours. Good quality food, drinks to choose from including alcohol. Against this background, the work of the customer support service stands out sharply: within 2 weeks they could not deal with booking tickets based on a voucher. Ultimately, we ourselves solved all the problems without their participation. Disgraceful work!
9/10

Not Verified | I flew on a Thai Airways Boeing 787-8 from Bangkok to London Heathrow. The crew were very friendly and provided a great service. The catering was on-point, both the Thai and continental options were very good. The entertainment system was good but lacked modernity, as the interface was outdated. The seats were comfortable and had a good pitch and recline. Legroom was also adequate. Cabin was clean too. Very fast check in 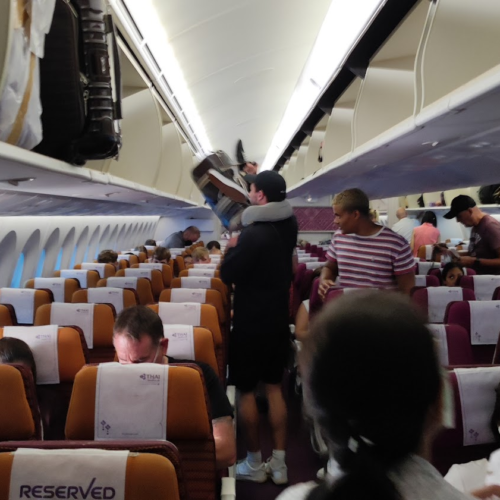 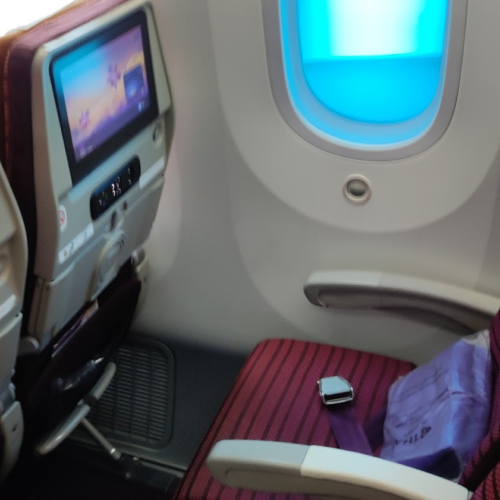 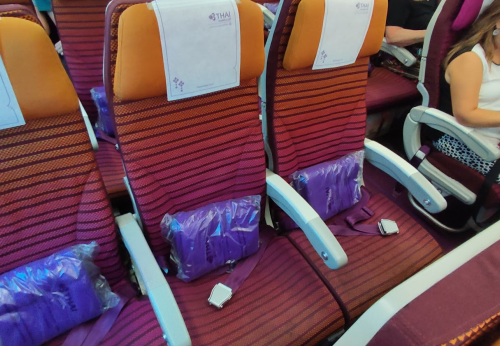 ✅ Trip Verified | I’ve grown tired of this airline now. I’ve flown in total 6 long haul flights with them and the quality of the product is extremely poor. Every single flight has been completely different, not for the good. The cabin crew aren’t polite, you are very much seen as an inconvenience. The food was terrible. The breakfast on the flight was the worst I’ve ever had. Inflight entertainment if poor, small random selection of films/tv programmes to watch. I was flying with Thai Airways purely because they are direct. However I will now avoid them. I’m very disappointed. Only positive is the direct flight.
10/10

"flight was by far the best I've ever had"

Not Verified | My experience with the last flight was so remarkable that the Crew deserves to get the praises for it. This flight was by far the best I've ever had, and I've flown this route at least 50 times in my life, with many different airlines. Thank you so much to the incredible Flight Crew who made this experience possible. I hope that I will be lucky enough to meet this Crew again for my future journeys.
1/10

"took another airline back home"

✅ Trip Verified | On the 20th Oct I was checked in by ground staff, who was rude and uneducated about the updated vaccine policy for Hong Kong residents, for whom we don't need any vaccination proof to fly to Hong Kong, other than a health declaration of the negative RAT test result and a HK health department QR code for flight. But when confronted, this staff joined his supervisor together to claim that they confirm they won't be allowed to process issuing my connecting flight (TG638) from Bangkok to Hong Kong, unless I have a HK vaccination proof record. So they only issue the HKT-BKK ticket and insist I can confront with the ground staff at Bangkok if I am allowed to board my connecting flight in BKK (just one hour 5 minutes connecting time there). I got stranded in BKK due to the lack of this connecting flight boarding pass. When confronted at BKK Thai Airways ticket office, it took me some time to argue with the Manager of the Thai Smile Phuket Ground Staff to confirm it was their mistake and lack of updated information and following up. At last, I wasted another 6 hours in BKK and took another airline back home.
1/10

Not Verified | As my flight was when Thailand was in lockdown i tried to find information on what to do in Bangkok as we were stopping there, I tried finding information and I tried contacting Thai airways before leaving. Absolutely impossible. They never answer to emails and they never picked up the phone after dozens of attempts. Luckily if you're a bit savvy you can find the website. But for the layman, good luck, because Thai airways ain't gonna help you. We took 4 flights with Thai in total. Out of those, my seat was broken on two of them. When I let the onboard crew know, it was like I was speaking gibberish. No care factor at all. Credit where credit is due, at least some of the crew were very nice and accommodating. During our flight back, my bag was absolutely smashed. It was peeling all over the place and a wheel had been knocked off. As well as my wife's brand new bag was also scratched to within an inch of its life. Unfortunately we made the mistake of not properly inspecting them before going to security at Sydney airport. Because it didn't matter however much I tried to contact Thai airways afterwards, they're just as impossible to contact. I even filled out their online form the day after. And when I finally got in contact with the Thai airways cargo email at Sydney airport I got to talk to someone. Regardless, just as fruitless as everything else with Thai airways so far. Claimed that I hadn't filled out the form and that I was out of luck. So essentially, because they're having whatever issues with their shitty website, that's my fault and my bag won't get fixed. Flying is usually never fun. But this experience has been the worst I've ever had by far. And the worst part? I would've come back, if they had just replaced my $100 bag. But Thai would rather lose two customers permanently. Couldn't recommend them.
8/10

Not Verified | Thai Airways was an overall very pleasant experience. Boarding: security took half an hour but after it boarding seemed organised and it was smooth! Seat was very comfortable and a large amount of legroom. Add this with a 333 Config and an adjustable headrest and recline, it was very good for Economy class. Staff were very friendly and were greeting people nicely. Food was tender and delicious, probably one of the best economy meals I had ever had in a flight. IFE: Fair enough. The system was smooth and straightforward, but it had less shows and music on average compared with other airlines. Thai offered charged Wi-Fi at reasonable prices. Was fast enough for browsing or streaming. Definitely recommend!
1/10

"I take no more Thai Airways"

✅ Trip Verified | Thai Airways cancel my flight that cost I and my wife 3 days in Hamburg to wait another flight back to our Sydney. They wrote a letter and said "we regret for inconvenience." then nothing more to show they care for their customers. Now I am complaining them, and I just received that "we have no basis to consider for any sort of compensation." What can you do with such a bad and rude company like Thai Airways? I take no more Thai Airways and ask you to do the same.
1 to 10 of 941 Reviews