"they did a pretty good job"

I flew from Asuncion to Buenos Aires in Economy Class. It was my first flight with TAM and I have to say that they did a pretty good job. I have read so many bad reviews of TAM, but in my case everything went absolutely fine. The boarding process was one of the most efficient I've seen. The crew was very friendly and I felt extremely safe on board, too. The flight was on time. Next time I'm in South America, I'll definitely try to fly TAM again.
1/10

"the most dysfunctional airline "

TAM Airlines is the most dysfunctional airline I have ever encountered anywhere in the world. On many trips through Brazil, I have flown TAM with relatively few headaches. However, in September 2015, my opinion has changed drastically. In short: their website is dysfunctional and buggy. They don't have English speaking phone support. And, even worse, their website lists ticket offices in Rio de Janeiro that don't exist anymore. It's impossible to change or re-book a ticket without horrendous, time-wasting hassles and expensive overseas phone calls to Brazilian numbers. TAM has no telephone support in English to assist with basic needs - like re-ticketing. You must call a LAN phone number to request an English speaker, and then wait for someone to call you back. In my case, I waited more than three days for someone to call me. Emails to Customer Service went unanswered (and a phone rep later told me that their Customer Service department responds to emails "within thirty days." I'm not kidding.) And although they replied via Twitter, they would only direct me to the same phone service that could provide what I needed - a changed ticket. In the midst of this frustration, I decided to visit a Ticket Office in person. I spent an hour to travel to an address that's currently listed on the TAM website for a ticket office in Ipanema. After arriving, I found a sign on the door saying that they had moved - and the new office location was closed that day (a Saturday). Infuriating. If you're an overseas traveler who is traveling in Brazil, and you don't speak Portuguese, I strongly suggest that you fly another airline. TAM's horror stories are plentiful, and until they make major systemic changes, I won't be flying them again.
7/10

"satisfied with the service provided"

Toronto to New York with TAM Airlines, and overall satisfied with the service provided. I used TAM given their competitive price, baggage allowance and reluctance to use Air Canada. The flights were on time, 1 hour flight time each way. Comfortable seating in Economy with a small snack service. Impressed with the cleanliness of the cabin and newness of aircraft. Speedy delivery of luggage at both airports. One thing I did not understand is why they wait so long to depart when everyone is seated and cargo hold closed. The cabin was a bit on the cool side as several people put on their jacket. I plan to use them again for my subsequent nyc trips. 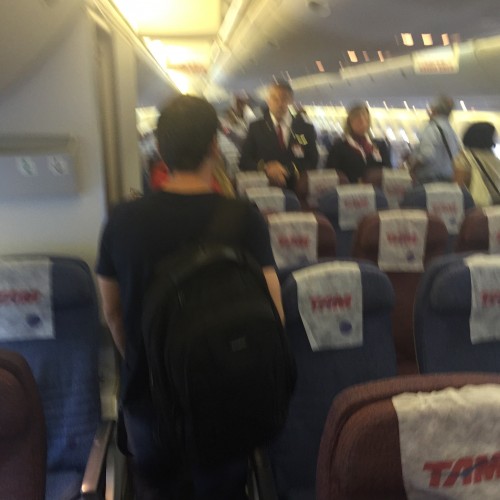 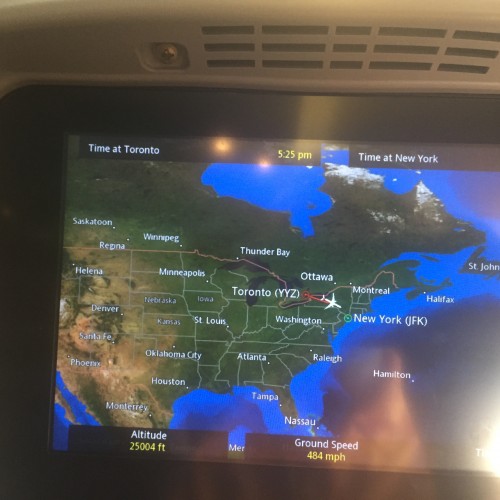 "Onboard .. TAM were very charming and efficient"

TAM administration is a disaster: took 3 weeks to establish what a schedule change was because the phone number provided is for LAN who must raise a 'file number' to any TAM query and revert (at their leisure). I am a OneWorld Emerald card holder - TAM do not, despite what their website says and what One World 'rules' say, acknowledge fast track departures. At Madrid people were being processed at fast Track, I had walk all the way back to join a very crowded general line. They do not extend extra baggage allowance beyond 2 pieces @23kg each. These 'gifts' are only for TAM privileges on their own card system. Onboard the flights TAM were very charming and efficient. Some of the nicest flight attendants around. Boeing 767 has flat seats, not overly comfortable in bed position (thin blanket and pillow too) but a nice roomy and accommodating cabin. Pretty good selection of movies on demand on a decent size bright screen. Food looked good but it was midnight so I didn't eat. Breakfast orders taken to order and served as per. Too bad their ground work is heading the way of LAN (who seem to work for the convenience of their employees more than anyone else)
1/10

"was our last flight with TAM"

First flight with TAM Airlines, last flight with TAM. Check in was fine, fast check in. Waiting for the flight another plan had difficulties at the bay, so delay by 50 minutes. Asked if the connection in Rio will be possible. Supervisior asked me to rebook my flight from Rio to a TAM flight, instead of LH leaving from São Paulo for a day later. Of course we missed the connection flight, because our priority luggage come out 25 minutes after the first luggage showed up. Talking to the TAM representative for a solution, he was not responsible. Referred to another colleague. Was just a waste of time, no offer for reimbursement. To be honest, this was our last flight with TAM.
10/10

TAM airlines is the only form of transportation I have come across in Brasil that is on time. I was impressed when I checked in and was transferred to an earlier flight that was already boarding. I was impressed at the efficiency. I boarded the earlier flight and was surprised that my luggage came on the same flight. They also had an English speaker so I didn't have to struggle with my Portuguese in explaining the situation.
2/10

Business Class service is equal to Economy Class on other airlines serving Brazil from Europe and USA. Service was fast, only one time drinks were offered and cabin staff disappeared for most of the flight. Talking with one Flight Attendant she told me that after LAN took over TAM, the airline is going down, employees are unhappy. She even suggest me to take Lufthansa the next time!
1/10

I had flown with TAM in several occasions and I had a good experience before, I can't say the same in this case, their customer service is awful, we had to wait one hour in the business check in counters because nobody was there. After one hour there they told us that our flight which was international had to be attended in the domestic flights area, and after another half an hour waiting there, they weren't able to introduce our rewards card into the system. I don't why but after almost two hours trying to make the check in we only wanted to leave. Worst ground service ever.
1/10

Worst longhaul flight I've had in a long time. Firstly my LAN-partner flight from Salta to B.A. was delayed by an hour, making me miss my connection (the flight should have been earlier, and the delay would have not harmed me, but the flight time was changed after I booked) so I was delayed by 24 hours. The next day's flight from B.A. to Sao Paulo was also delayed, with at first no annoucement at all (we had already boarded), then very late an announcement with differing details in Portuguese, Spanish and English, then an announcement that we would be offloading some passengers to re-book which turned out to be correct. Very chaotic, and the crew disappeared during this time. Finally I did make my final connection, and on this one (the 12-hour flight), my entertainment system didn't work, this included my call button, so I couldn't even get assistance and the crew didn't bring around drinks once during the entire flight (except with the 2 meal services). My initial flight from Frankfurt to Sao Paulo had also been cancelled, but here I was lucky to get re-boked on a LH flight. I will never fly with TAM again.
2/10

Flight JJ8020 from Rio de Janeiro to Santiago. To call it a business class is a gross exaggeration. To begin with, with a flight departure at 07.04am, the lounge was not open until 06.15 when they began boarding for the flight. On board, no welcome drink, a broken seat (luckily the seat next to mine was available, so I could move) and a cabin crew that were more interested to talk to each other than to welcome boarding passengers. After take-off, again the cabin crew spent most of their time closing the curtain between the business class and the galley. Breakfast was reasonable and had a choice of a platter of cold cuts and a hot omelette. After that, no more spontaneous drink service for a 4.5 hour flight. Selection of the press very poor and no individual entertainment system. The aircraft was old and looked and felt old. Very indifferent service.
31 to 40 of 226 Reviews