"I subsequently had to leave the flight"

Not Verified | Upon entering their aircraft last week, I had a coffee in my hand, and was holding 2 other bags - one over my shoulder and one in the opposite hand. I had been sipping from the drink and thus, my mask was temporarily down, below my mouth. As I approached the flight attendants, one of them told me to pull my mask up. He was rude when he spoke to me. I politely told him that I was drinking, and that neither of my hands were free because I was holding my bags and my drink. He responded "you are not actively drinking now, so pull your mask back up." I nodded and said "OK" and pulled my mask up, covering my mouth and nose, and went to take my seat. About 5 minutes later, the same flight attendant approached me while I was in my seat. My mask was pulled up over my mouth and nose. Once again, he spoke to me in a rude manner. He said "is there something you don't understand about your mask?" I answered "no," and he proceeded to tell me that I had "already been a problem" and he threatened me by stating "if you continue to be a problem, I will have you removed from this flight." I reminded him that when he had initially approached me, I was sipping from my drink and neither of my hands were free, and that these were the reasons that my mask was temporarily down and I was not able to immediately pull it back up. During the entire time he spoke to me, I had my mask pulled up over my mouth and nose. After he spoke with me, I took another sip of my drink, and then once again pulled my mask up over my mouth and nose. Without warning, this flight attendant approached me again and told me that he needed to remove me from the flight. When I asked him why, he told me it was because of "mask compliance." I reminded him that he had warned me previously about my mask, and that after that point, I had kept my mask pulled up over my mouth and nose the entire time. He continued to speak in a rude, pushy and condescending manner, and insisted that I had "violated mask compliance." When I asked him for evidence he responded with "I saw you." I politely reminded him that my mask was pulled up over my mouth and nose, and that I had followed his instructions the entire time since he gave me the instructions. He continued to tell me that I had "not followed his instructions"; this is an outright LIE. He also mentioned that he "did not feel safe" on the aircraft with me, which does not make sense given the fact that I had my mask over my mouth and nose for the entire time that he spoke to me. He condescendingly asked me "did you forget to read the rules and regulations of this aircraft when you bought your ticket?", an unnecessary comment that seemed to be made only in order for him to be even more disrespectful towards me. I subsequently had to leave the flight.
1/10

"there was no help from Swoop"

✅ Trip Verified | Terrible counter customer service. My first impression with SWOOP has been a disaster. While travelling from Toronto to Edmonton, we were left stranded (family of 5) along with 20 other passengers. We had checked in online for our boarding passes but we bought 2 checked luggage options which required to be dropped off at the counter. If we had not done this, I probably would not be writing this negative review but I would be running naked in Downtown Edmonton for 10 days! Or flight was at 7am, we were at the airport at 5.20am. They do not have a bag drop-off counter, instead they made us line up. There were too many passengers for 2 customer agents, which later turned to 4 but it was too late. We were at the counter at 6am, that is a 1 hour delay. Their flight supervisor checked us in. There was no indication from her that we were late for our flight. TSA only made matters worse, they delayed us another hour. However, there was no help from Swoop, no announcement, no agent was sent out to help us get through the line at all. By the time we showed up at the gate, the flight was closed, and were left stranded along with another 22 passengers with no help at all other than a card for the customer service department. We managed to book ourselves on a later flight with Flair Airlines but it meant spending an additional $1700 that was unplanned for. I am extremely disappointed with Swoop!
10/10

"thank her again for all her help"

✅ Trip Verified | I had a problem with my return flight to Edmonton. I tried to correct it on line and no go. I went to airport in Kelowna and talked to someone at the counter. They called the supervisor Martyne and she was very helpful. She helped me rebook a flight home and found me the best price. Martyne went way beyond and above to help me solve my problems. I want to thank her again for all her help. A very treasured Employee.
7/10

"has always been a pleasant experience"

✅ Trip Verified | I’ve flown Swoop several times now (mostly Kelowna-Toronto routes) and it has always been a pleasant experience. I’m glad there’s an option to fly to Kelowna direct. This being said, this is a budget, low cost airline… as long as you’re aware that this will come with its set of challenges and painpoints, you shouldn’t be too shocked; they aren’t always reliable but if you’re flexible, it’s always a great option to travel without breaking bank. The good: - cheap prices - extra legroom option is spacious (and worth it imo) - great staff and service on board ( don’t know about customer service) - wifi works great The bad: - planes are old and worn out - Swoop often cancels and rebooks passengers on different flights (when flight isn’t full they will cancel and rebook you, or are a random layover to board more people). 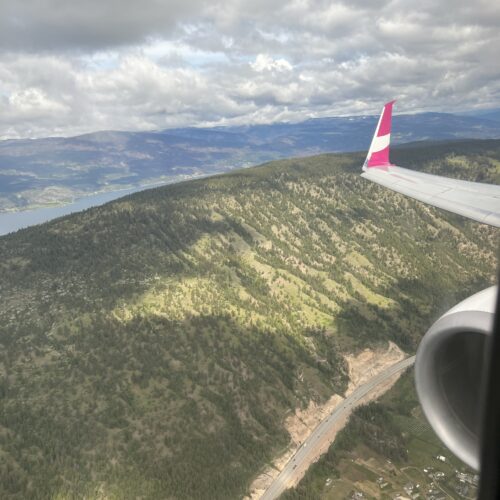 "Terrible service, no help at all"

Not Verified | My father’s flight time was changed to 90 minutes earlier and we were not notified, not by email or any other means. My father missed his flight home from BC and got offered zero compensation for it, he now has the book with another airline to get home. Terrible service, no help at all. Left him stranded.
1/10

Not Verified | Hamilton to Halifax. Trying to change travel dates for upcoming flight, I have had zero response from airline! Still waiting in queue for an agent for more than 24 hours! And then I waited on hold for 2.5 hours on phone today! Online system pops up errors when I try to modify myself! Customer service is absolutely the worst! With two deaths in the family in 6 months at the other end of the country, we really want to make it for the internment! At this rate we will miss our own!
1/10

Not Verified | Phoenix to Edmonton. Worst airline I have ever travelled with! I got to the airport two hours in advance of my flight and I waited an hour and 45 minutes to even check in my bag! There were about 30 people who almost missed their flight due to the airlines inconveniences. Be better!
4/10

✅ Trip Verified | I, for one, have experienced their schedule changes every four occasions I bought tickets from them. They change their flight schedules willy-nilly which caused a lot of hassle for me to rearrange my trip plans including car rentals, housing, and vacation days I take with my employee. Their customer service agent showed me no care in rectifying the trouble that they caused beside offering a refund in the original form of the payment. They in fact explicitly told me that their terms and conditions allow them to change the flight times whereas when you modify your flight date costs you $100 (not refundable in any way). If the regulatory did not obligate them to refund consumers in such incidents, they would not even refund and only get your credit to buy from them again (that happened to me the first time). On top of that, once your flight dates changes and even if you get a refund, you'll need to book another flight to stick to your plans, but then as you get closer to the flight dates, you'd end up paying more to secure a seat for a similar flight. Another wrinkle I had with them was the long waiting time (three hours) to get to customer service. They just acknowledge these flaws, but they think their low-prices warrants them to have those flaws.
1/10

"flight was cancelled due to weather"

✅ Trip Verified | My flight was cancelled due to weather. When it was cancelled we had checked our luggage yet there were no staff available to answer questions like when will this flight be rescheduled. After going through another airline to get our luggage back, we went home and found out the next day the flight was leaving at 10am ... impossible to make it to the airport on time. When I called about a refund or voucher, I was told not their issue as the cancelation was due to weather.
1/10

"my flight was delayed for 12 hours"

Not Verified | Well after multiple attempts I finally got an answer from swoop. It is not the answer I wanted to hear because my flight was delayed for 12 hours and they are offering nothing which in my mind is not acceptable! Thanks Swoop for making my choice an easy one in the future! Good luck staying in business with the brutal customer service you offer!
1 to 10 of 542 Reviews