"said you're out of luck"

✅ Trip Verified | Flight was canceled just hours before with no explanation. We were supposed to have a layover in Zurich for 20 hours where we booked accommodations and had to forfeit the cost because we were rerouted to Singapore for a later flight. This meant we now had to wait at the Male Airport for 12 hours before our next flight! I tried to call Swiss Airlines multiple time, but waited for 2 hours and still no answer. Since a phone call was useless, I wrote at least 4 different complaints on their site and only received 1 email a month later which basically said you're out of luck.
4/10

"the most disappointing carrier"

✅ Trip Verified | Having flown this route many times, Swiss was the most disappointing carrier. Seat not comfortable and no duvet for overnight flight, only one extremely uncomfortable pillow and blanket supplied. Poor food with few options, no wine list offered. Waited 40 minutes from first course salad to my main dish arriving. Staff not attentive. Small restrooms with no space for changing into night clothes. Laughably basic amenities kit (socks and toothbrush). Poor choice of IFE. Brand suggests quality but fails to provide it. EVA Air is head and shoulders above Swiss on this route. Would not recommend
4/10

"you pay more but you get low cost treatment"

✅ Trip Verified | The FLR-ZRH was on a Helvetic Airways Em190 in excellent condition. Flight was in time and inflight service was only a bottle of water. The ZRH-ATH was on A320 plane in good condition, departed on time. There was no IFE. There was no inflight service, than a bottle of water and a small chocolate. There was a buy MENU option. You could not change your seat at e-check-in, unless you pay for it. I cannot see the difference with low cost companies. On LH you pay more but you get low cost treatment. 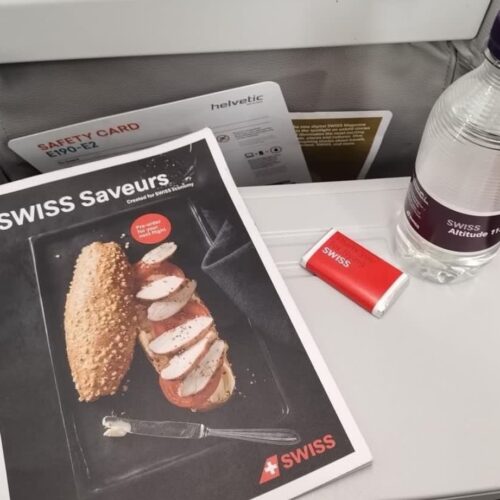 "haven't been reimbursed for anything"

✅ Trip Verified | First our original flight was cancelled due to "mechanical issues" 7 hours prior to take off. We spent the entire day trying to get a hold of someone to rebook, we were told eventually that the only way we were getting on another flight is if we paid $400 extra per person. We finally went down to the airport (2 hours away) and waited for the desk to open so we could speak to someone in person. We were rebooked on a flight 2 days later. Instead of having 1 layover we were going to have 2. So our first flight is fine but then the 2nd flight is delayed which causes us to miss our 3rd flight. We were then stuck in Zurich to wait in line at that airport for someone to rebook us on another flight. Which then ended up in 2 more flights! We finally get to Budapest only to wait 2 more hours for our luggage which never showed up! We file a missing luggage report and don't end up receiving our luggage at all during our Christmas vacation. We ended up having to buy a bunch of clothes and toiletries which we have still not been reimbursed for. We didn't get our luggage back til more than 30 days later. When it arrived it looked as though someone dragged it through the dirt and, it went to my neighbors house down the street, not even my own house! We haven't been reimbursed for anything! Not even the $150 luggage fee when they lost our luggage!
1/10

✅ Trip Verified | Very fussy airline. At the gate they run around with a scale to find cabin luggage with more than 8 kg and charge you 70€ for it. Worse experience than with other low cost airlines!
4/10

✅ Trip Verified | Bought 5 business class tickets for > 20k€ and called a few day before to make a change. It took me 2 hours to talk to someone who was in a call centre with little knowledge about the airline. I asked to be called back if call dropped, which it obviously did and then no one called back. I dialled back and talked to someone who told me he couldn’t call back if it dropped. Call dropped again. I call back to talk to someone who took 45 mins to assess whether I could change my ticket. Long story short, they forced me to do an extra leg for nothing (thank you for the planet). I eventually gave up as the person was so unqualified. Horrible business class experience. I fly more than 100 flights a year for work and this is one of my worst experience. I used to Air France’s well qualified business class customer service who speaks English and actually cares about the company and its customer. I wish I could attach the recording of the call as it was just embarrassing the questions I was asked. The flight is a bit old and the service is low cost. Food is not good. Really not at par with other international company. I used to love Swiss, but this is my 3rd bad experience with Swiss business class in less than a year. If you travel business: avoid the company as there is no way to discuss with someone well qualified, and you have to wait 2 hours on the phone like any low cost economy tickets.
7/10

"Food in flight was bland"

✅ Trip Verified | To begin with, the web check-in did not go through because my ticket was booked via United. In the aftermath, the seats I got were in rows 28 and 32. At the check-in counter in Chicago however, they changed my seat for second flight to row 23, where legroom was spacious. Food in flight was bland for both flights. IFE was functioning, watched Top Gun series on both flights. There is a lot of room for improvement in terms of food and catering service. Other than that, it is a decent airline, but needs a lot of changes. Also got miles on my United mileage plus account.
1/10

✅ Trip Verified | They cancelled the flight 4 hours in advance (LCY->ZUR). No rebooking options were provided, and I will miss a crucial part of my business visit. The chatbot was entirely useless and no human showed up in the chat box to discuss options. No information was given about refunds. They have zero respect for customers. I had previous bad experiences with them but the flight connection from LCY was too convenient to ignore. Don't make the same mistake.
1/10

"they can't see any mistake from their side"

✅ Trip Verified | I have always been a loyal fan and guest of Swiss and have always been more than satisfied with their service. Unfortunately, my experience with my last booking to the US clearly clouded my opinion. As always, I booked my flight to Chicago via the Swiss Smartphone App on August 30, 2022 to visit my fiancé. I wanted to take the opportunity right away to bring our two cats over. I knew that this is easily possible with Swiss and that I simply had to call the hotline after booking to reserve the places for the cats in the luggage compartment. When I received the booking confirmation, I found that the flight was operated by United Airlines, which was unfortunately hardly visible in the app. However, I figured if Swiss partners with United Airlines, the policies and services will be the same. I then called United Airlines to reserve the space for the cats in the luggage compartment. I was quite disappointed to find out that United Airlines no longer takes cats in the luggage compartment. My disappointment was enormous because I had booked a flight that is of no use to me. I then called the Swiss hotline and I had to book a new outbound flight with Swiss with additional rebooking costs of around CHF 270. About a week later I call again to make sure the cats are booked and they tell me they are on the Chicago to Zurich flight, which was wrong! After several calls i finally managed it to have them booked on the flight from Zurich to Chicago and not vice versa. The day before departure I went to the pet store to buy a suitable transport box for the cats and called the Swiss Hotline from the shop to make sure I was buying the right transport box. The person on the hotline assured me that soft transport boxes with a steel frame are also permitted for cats. So I chose a model for CHF 120. When I checked in the next day at Zurich Airport, I was told that these boxes were not permitted and I had to buy a new one for CHF 140.00 on the spot and had no other choice than throw the other one away. I had additional costs totaling CHF 530 for this trip, which I could have avoided if Swiss had communicated correctly and the information on the app were more visible. Afterwards I have filed a complaint and i got a short and impersonal answer back that they can't see any mistake from their side. Partnerships with other airlines are legitimate, but it must be clearly stated that the policies and services are not the same. every time I called the hotline, I agreed to be recorded, so they should be able to find out about their misinformation, shouldn't they?
4/10

"My seat was changed from bulkhead aisle to middle"

✅ Trip Verified | My seat was changed from bulkhead aisle to middle although I paid extra for the aisle bulkhead. No option to change back was offered. I later switched to an aisle farther back in the plane. No refund of the upgrade was offered. Boarding was delayed and not by group. Departure was delayed.
1 to 10 of 940 Reviews