"I would never ever use Sunwing again"

Not Verified | Flight was delayed for 7 hours, instead of scheduled time at 17.05 on Jan 26, 2023 we flew at 24.20 (next day) on Jan 27, 2023. Pilot apologised for the delay and stated that company had to change aircraft and crew for technical reasons and that why it was delayed. During the flight there was absolutely no service and we were given water only after we asked! After arriving in Toronto we waited for 2 hours to get our luggage and announcement that they provided that they were scanning the luggage and didn't know how long it would take. We tried to submit a claim for the flight delay and the airline stated that it was due to the weather in Toronto, however there were other Sunwing flights which came from Toronto on time and left Cancun on time on the same date! So company lying without any hesitation, I would never ever use Sunwing again for any travel. 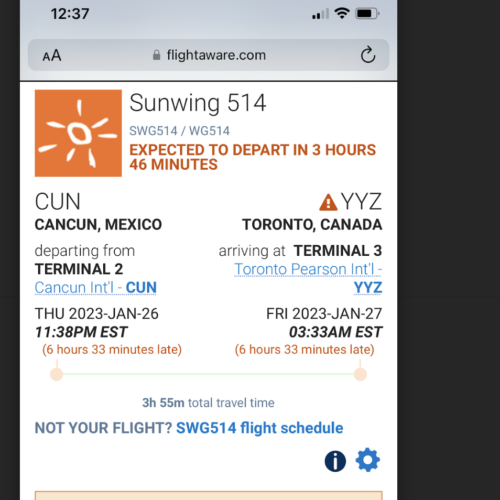 "Lack of staff, pilots and planes"

✅ Trip Verified | Bad Communication: Sunwing did not inform passengers with the correct time of departure on its website, on its app or with its emails (more than a 6 hour difference). Lack of staff, pilots and planes : the airline did not have enough people or planes to run its routes, especially if circumstances were not optimal. This was the reason of so many delays. Other airlines, on the same routes did much better without huge delays (days). The airline gave false reasons for its delays to avoid paying passenger compensations, even when it was obvious what the true reasons were.
5/10

✅ Trip Verified | Online booking not bad, we booked the day before departure the reservation didn’t transfer to the check-in system, so we couldn’t check-in online and possibly save some money on baggage fees, the Flight was on time, onboard service was fine, with a coupe of water runs during our 4.5 ish hour flight. Information online hard to find some important information, we had a total of 4 bags, first 2 were included for free, the other 2 were overweight and we knew we would have to pay for them, some other airlines would just charge overweight fees for the second bag and you can find the information on their website. Sunwing charged us the second bag fee of $90.00x2 for the overweight bags and then $115x2 for the same overweight bags, like I said we knew we had to pay, we possibly would of have made different plans if we could have found a more clear policy on baggage fees and how they are applied.
3/10

"Misinformation or rather lack of it"

Not Verified | Our flight back was delayed. We supposed to leave on the 17 of December from our hotel in Guardalavaca, but flight was delayed. The problem was that we didn’t know how long or if we are going to leave at all. We have to check out the hotel room at noon. So we waited in the lobby until 10 pm when the bus took us to the airport. Misinformation or rather lack of it was very frustrating. We left the hotel when we supposed to arrive in Toronto. We got to the airport and same thing: nobody knew when are we going to depart. We were luckier than others that didn’t make it home for Christmas. I’m not sure if I will ever fly with Sunwing after the horror stories I read.
1/10

"we are never flying with Sunwing again"

Not Verified | Given what other travelers suffered this same month, I suppose we didn't have it nearly as badly, it was just a bare bones airline that nickel & dimed you for everything from soda onboard to an added $25 fee per carry-on luggage. First, we paid $50 for upgraded seats which unless you are very tall don't bother. You don't get priority boarding as promised, they boarded people "with children or those who need more time first" and apparently more than half the plane thought this was them. At that point the rest of the passengers lined up to board. This is not how other airlines manage boarding, they use zones. The same thing happened on the return flight, so again, not worth the upgrade. There is no in-flight entertainment at all, we had to pay to upload movies onto our laptop, the food onboard is sparse and of low quality, it costs for even basic soda and drinks were pricier than Air Canada. Priority luggage is not a thing and I'm furious we paid for it: our luggage came off next to last and not together. The same thing happened on the way home. Our transfer from the hotel to the airport home never arrived, despite our hotel calling and texting them. We ended up paying 96USD for a cab and at the airport we heard the same situation happened for many other travellers who had to scramble and pay for their own rides. Sunwing didn't answer anyone who tried to reach out to inquire about where the transfers were and so far no one has responded to us about being refunded our cab fee. The airport was full of people who had no idea if their flights to get them were even coming and this is because Sunwing is not updating anyone, including the incoming airports. Even FlightAware wasn't updating, I had to go to the actual live radar app to find out if flights were coming, which means the airline itself has no clue where any of it's aircraft are. So many angry frustrated passengers and it made for complete chaos in the Cancun airport, especially since all of the Sunwing flights fly out of the tiny basement area and not the spacious main area up top. This is the second time I've flown with Sunwing and the last time they lost our luggage on a direct flight despite us getting to the airport 3 hrs early, We spent 24hrs without luggage. I don't care how much more it costs to use a competitor, we are never flying with Sunwing again.
1/10

Not Verified | They are more expensive than others, if you add all the hidden fees, the cost of your luggage and carryon. I paid extra for my seats. They charged me extra for my purse because it was 5 cm bigger than suggested personal item size in their website, with my hat in there. Horrible customer service. They told me that my 4 year old is not considered a child under sunwing policy. Unless your child is under 2, he/she is not a child. They call them non adult. also, if you have a bag or laptop that is even 1 cm more than 23 cm x 28 cm x 13 cm, get ready to pay for it.
1/10

"We will never book Sunwing again"

✅ Trip Verified | Worst Airline Ever! I never write these but this is terrible. My recently widowed sister, her 4 kids, grandparents, my wife and I were supposed to take our First family trip. This company just ruined Christmas for these kids, then we rebooked for New Years and now 16 hrs before our new flight, Sunwing decided that SK doesn’t deserve vacations until Feb. We will never book Sunwing again! They will surely disappoint you and their customer service is beyond terrible. NO communication. Not trustworthy.
1/10

"staff are rude and incompetent"

Not Verified | Worse airline ever! Avoid at all costs! The staff are rude and incompetent. We lost 2 days due to delays and lies that they fed us at the airport and they refuse to communicate with us ! I can’t believe how they are still in business after the last couple of weeks incidents .
1/10

✅ Trip Verified | Absolutely horrible experience with Sunwing: Pearson to Punta Cana for an All Inclusive vacation. Avoid at all costs, even if alternative airlines are more expensive. You will pay in other ways! The line-up at Pearson for baggage drop-off is 2+ hours (online check-in), absolutely no other kiosks had this amount of backlog. Frustrated customers. There are unnecessary checkpoints for "travel documents" which no other Canadian airline required. In Punta Cana there is an additional „checkpoint“ to pay US$20 Dominican exit tax: Again a massive line-up and delay (other airlines like WestJet include this tax in their fare, no waiting). As other customers noted, delays and carousel wait-times are unacceptable. 200+ people crammed around the YYZ carousel for over 2 hours. If you are elderly or traveling with kids avoid this airline at all costs.
3/10

Not Verified | Very Disappointing. Never recommend this airline. We found out that our flight is delayed for 6.5 hours when we were dropping off our luggage at Toronto airport. Even the lady at reception said she just found out about delay. We decided to wait at the airport because we took a ride to airport. No alert or notifications were sent to us that the flight going to be delayed. Same thing happened on our return. We checked out of our resort and we’re ready to leave when I just checked online that flight is delayed for 4 hours. We have to wait in the resort lobby. We could have taken a good use of the day if we had received a notification of the delay few hours earlier. Do not travel with Sunwing. 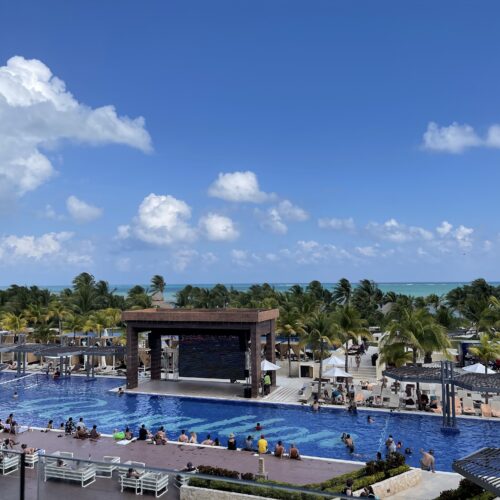 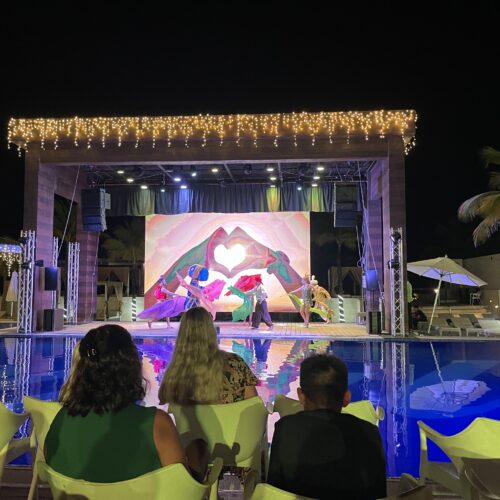 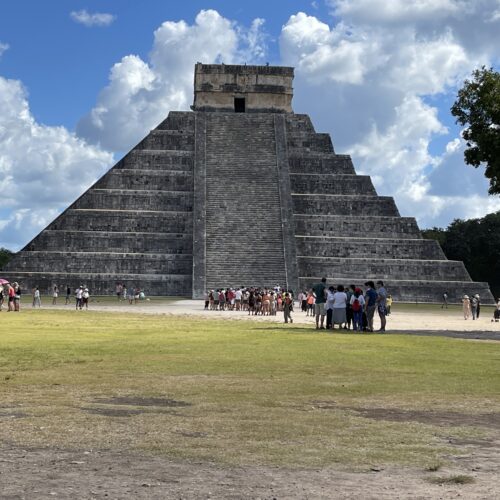 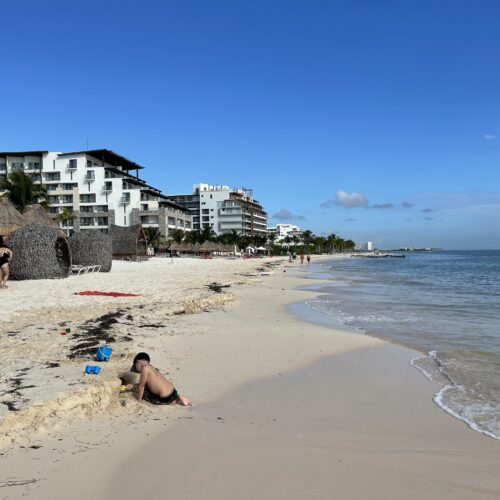 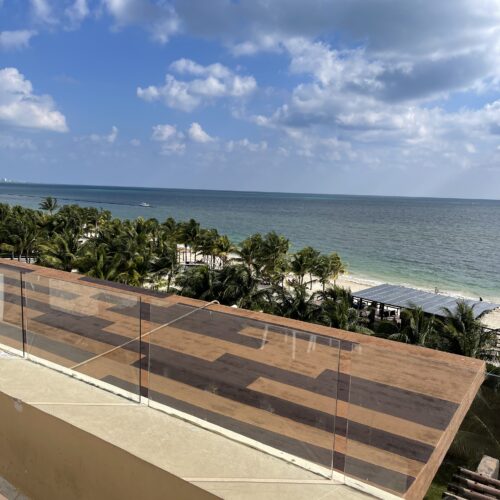