"never notified me of cancellation"

Not Verified | Dallas Ft Worth to San Juan. There are no words to describe my frustration with this airline. My flight to Puerto Rico was leaving today April 14, 2020 at 5:40am and at the time of check-in they indicated that the airline was closed and had canceled all flights. The airline never notified me of the cancellation. I contacted them and they offered me three alternatives, first was that they would return the money but that it takes time to register in my bank account, second is that I have a one-year pass to fly with them again and third that the closest flight is on June 10, 2020. I am a police officer in PR and I am banned at the Dallas airport to pay another hotel and transportation to figure out what can I do.
1/10

"no word to describe my frustrations"

Not Verified | They changed my flight to my home country half an hour before leaving, after paying $150 of taxi to get to the airport and they told without any reason me that the flight was cancelled and I had to go home to wait for the next available flight. After hours of arguing with them they decided to give me a flight with another airline and they told me that I didn't have to pay anything. Without considering the fact that the flight was leaving in less than an hour and I needed to do another time che check in for the luggage and all this in another part of the airport that can only be reach by train. I had no word to describe my frustrations. I run to the train and get to the other terminal. I reached the check in and the employees of the other airline tell me that I had to pay $40 plus for the luggage. I said that is not possible, the other guys told me that it was included. Nothing to do, if I wanted to get my luggage on the plane I had to pay. They told me that for any complain I had to go to the other terminal. With the new flight I had to make a scale of 12 hours in another airport.
9/10

Not Verified | San Jose to Fort Lauderdale via Atlanta. My husband and I had a trip planned for April 28, 2020, and had to cancel our trip due to COVID. I was able to use the automated texting option to cancel my flight and get a full refund! It was easy and quick! We have flown many times with Spirit and we will continue to choose Spirit for our future flights! Thank you, Spirit!
10/10

"I appreciate you helping me"

Not Verified | Los Angeles to Ft Lauderdale via Atlanta. Thanks so much to David from customer service in Los Angeles airport in spirit airlines I had a big issue and David helped me so much. I appreciate you helping me. I had issue because of the corona virus and David took care of it like he was my family member. In this flight I have met Nadine and she took care of me from Los Angeles all the way to Florida.
1/10

"never ever buy another ticket from Spirit"

✅ Trip Verified | My flight was on 3/16/2020 from Portland to Los Angeles. My children and I had to be on our flight at 6 a.m. on 3/16/2020 so we arrived 2 hours early at the Portland, OR airport. My children and I were approached by an employee that worked for Spirit airlines who was extremely rude when I tried asking questions about the luggage policy. She did not answer my questions and walked away to answer another customer's question. Another rude Spirit employee was very nasty and short with people. When she was done putting the tags on my luggage she never directed me and my children on where we were supposed to go and she gave us attitude the entire time. Finally, at gate D6 Spirit employee was very rude and unprofessional. He yelled at me to get out of line due to Spirit making an error excluding my 1-year-old on my ticket. I wasn't moving fast enough for him so he rushed me out of line. I will never ever buy another ticket from Spirit again because of the unprofessional employees. My kids and I went through a lot of trouble due to Spirit's errors just to board our flight.
1/10

"compensation we got was ridiculous"

✅ Trip Verified | Houston to Newark. Me and my friend were supposed to fly back home to NYC on 2/23, but they kicked us out of the plane and rescheduled our flight for 2/25 because my friend “looked sick and needed to talk to a doctor”. The doctor asked if we went to China in the last 2 weeks, the answer was no. However they did not allow us back on the plane, and my checked bag flew to Newark. I went to the luggage office to ask them to send my bag back, and no one was there even though it was during their operating hours. I called the number provided at the door, no one picked up. Later that day, a passenger from the same flight called me to tell me that he has my case and gave me the address of his hotel in NYC to come and pick it up. Not only that I lost two days at work, but also I had those additional expanses for staying two more days in Houston, and I was without my bag because it was picked up by another passenger. We called them several times and filed several complaints- the response was - “we’ll call you back” or the ticket was passed on to another department. They were sorry that we had to reschedule our flight and they were happy that I was able to reunite with my bag. After one month of conversing back and fourth, they offered two $100 vouchers, refunded $85 for my checked bag and $12 for my toiletries that I bought in Houston. They did not cover other expenses, including our accommodation, and transportation from/to the airport and to the hotel where my bag was situated. We went through embarrassment on the plane, stress about my lost bag, additional expanses and suffering due to rescheduled flight, but the compensation we got was ridiculous. We also spent so much time negotiating for that little compensation they gave us. I will never ever choose Spirit Airlines. 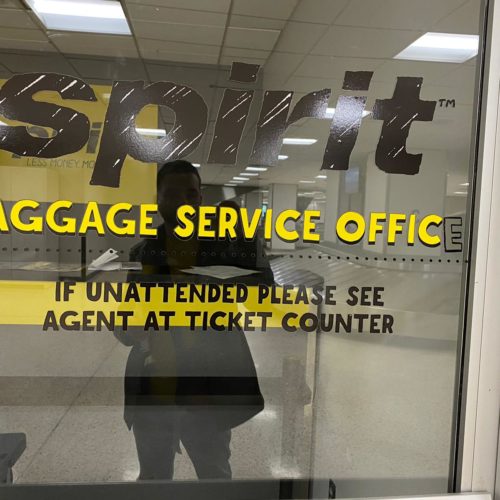 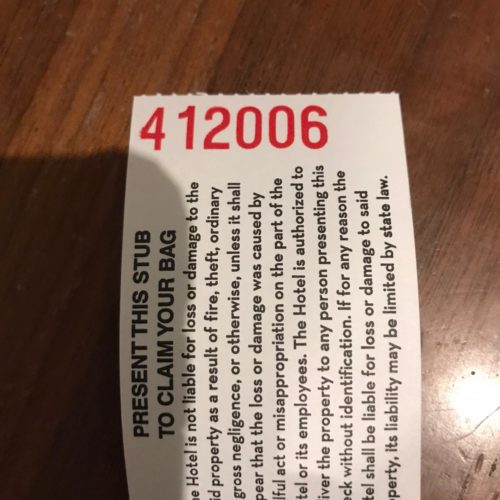 "They cancelled us 7 times"

✅ Trip Verified | Our flight to Las Vegas on march 16th was fine.Trying to get home was not. They cancelled us 7 times with no results. We had to fly out on another Airline. Spirit Airlines tried to get us to pay extra money for a flight we already paid for weeks in advance. We were stuck in vegas for 2 days with no help from Spirit Airlines. This company had no reason after the first day not to fly out of vegas. Spirit Airlines told us flight is confirmed for the 21st and at 7 pm you cancelled again. Do they not realize how stressful this is and do they care?
1/10

Not Verified | Flight to FLL ok no complaints. Flight from Fort Lauderdale to Santiago DR no complaints. Bottom line Spirit left me stranded in the Dominican republic. Stating government canceled all flights. Had to purchase another ticket from a different airline. Don't understand why Spirit could not or did not want to honor there flights. I know Jet Blue, Delta and American airlines still had flights and were willing to assist in getting citizens out of the country. Spirit took the money and ran. United States Government should not help this airline out. Spirit did Nothing for its passengers that had tickets purchased.
8/10

Not Verified | Surprisingly good service. If you know what you’re paying for in advance, and understand what our ticket price includes, you can get where you’re going safely and with courtesy, and in surprising comfort if you play your cards right. My wife and I paid extra for “big front seats” and for one checked bag, and we’re still able to get to our destination for half of what American would have charged us. We brought snacks on board, and snuck some vodka and gin miniatures with us to save money, and just had to pay the $9 for three mixers from the flight crew. Don’t like their prices for Diet Coke and Bloody Mary Mix? Don’t buy them. Our friends who were traveling with us could not make the flight because one had emergency surgery. Spirit, upon request, agreed to offer them credit for the flight despite their policy of not odpffering credits or refunds. I’d say that was a bit more than fair. I’ll happily fly Spirit again.
11 to 20 of 3338 Reviews

Spirit Airlines is a low-cost airline. Apart from the seat on your flight, you have to pay extra for carry-on bag, checked luggage, printing boarding pass at the airport, early boarding, seat reservation, drink or snack on the plane, ticket change or cancellation.

To maximise the benefit of selecting Spirit Airlines as your low-cost airline, it is very important that you carefully check and follow all of their conditions - printing your boarding pass, paying in advance for any checked or carry-on baggage.

The above charges are for guidance and subject to change. They should be checked directly with the airline for accuracy

Your free allowance is 1 x personal item on Spirit Airlines flights (Max size: 16"x14"x12"). All other carry-on and checked bags have to be paid for. It is IMPORTANT to do this online at the time you book, or you could end up being charged USD$100 per carry-on bag if you leave it until the boarding gate. 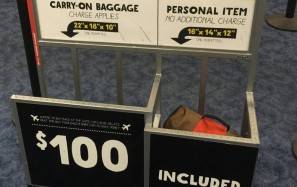 Buy Onboard *see below

Buy Onboard *see below

Payment onboard can only be made with major credit cards : no cash. The prices shown are for guidance only and are subject to change. You should check charges directly with the airline for accuracy.

Spirit Airlines operate a fleet of Airbus narrowbody aircraft, including A319, A320 and A321 types. Seats are configured 3x3 for economy class, and 2x2 for Big Front seats. [Photo Spirit Airlines] 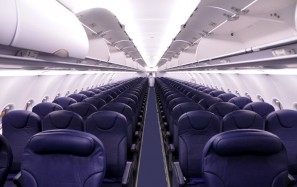