Not Verified | This was our first time ever flying Southwest and it will be our last. Totally disorganized and for the price of our ticket it was a rip-off. We paid $1200 each plus upgraded once not realizing that people can sit in the same area without paying. This was from Nashville to Puerto Vallarta. I have traveled all over the world including on many foreign carriers and have never had an experience even close to this one. Beware!
3/10

Not Verified | Southwest has been getting progressively worse. If I had a problem with one flight once in a while it would be fine, but every time I fly Southwest something happens. They damaged my brand new suitcase. 4 hr delay. 30 minute delay because their attendant was late. A very unprofessional airline. Many of the employees are pretty grumpy. Wouldn't recommend
4/10

"the most terrible experience"

Not Verified | I had the most terrible experience flying with Southwest for the first time. First, I had to deal with security at Baltimore airport, who shook me down over a bottle of hair cream and because of the sparkles on my sweater and missed my first flight, then I was placed on a later flight with Southwest, waiting to get back home to Florida, but waited an entire hour at the airport, due to the flight being delayed and the Southwest staff failing to update us on why we were an hour late leaving the airport. When an explanation was finally provided, we were told that our plane had to be towed, which made no sense, then we were told that we were unable to board, due to a technical issue with the computers. So, we were dealing with a huge, tired and confused group of people, waiting around in the airport, just waiting to go home. Oh and the saga doesn't end there, once we were FINALLY able to board the plane, we had to wait an additional 30 minutes, for no reason. I don't think I will ever fly with Southwest again, I didn't get back to Florida until 10:30pm and still had to drive 45 minutes to where I actually live, from West Palm Beach.
9/10

"Overall, my flight was great"

Not Verified | Overall, my flight was great. We arrived just in time for boarding, and it was quick and fast. Taxing was surprisingly quick. Entertainment was easy, you could bring your own handheld device. The website offered a ok selection of movies and tv shows, along with free messaging (iMessage and WhatsApp). Internet costs 8$, but free for A-List Preferred members I believe. Lastly, they had a good selection of Live TV stations and free Iheartradio. The seat width was good for a 2 hour flight, however one concern I would have is food. They only offer a snack mix on the airline, however they do offer a selection of beverages. If you are going on a longer flight, please bring your own food. The landing provided scenic views of the Hoover Dam, the touchdown was a little bumpy. I would recommend Southwest if you want a great experience and cheap fares. And I forgot to mention, be sure to take advantage of their free baggage system! (first 2 bags free) 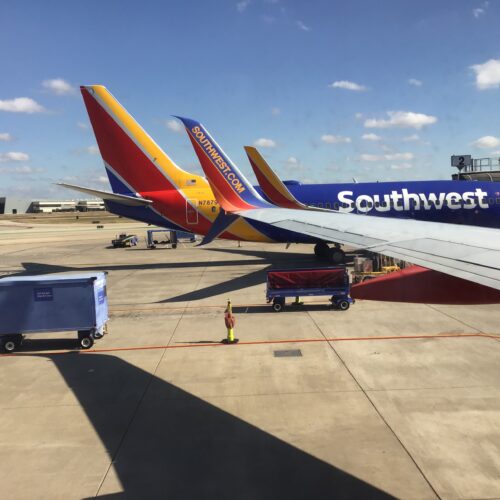 ✅ Trip Verified | Worst experience flying with Southwest. First they cancel your flight, then the process to rebook is a headache, also don’t forget after they rebook us from our original itinerary to San Diego I have to land at Ontario and have someone drive 4 hours (there and back) to pick me up. Also my luggage is on a completely different flight. Not only that but my other friend is given false tickets since she was left in Long Beach instead of lay over in Oakland and land in San Diego. She lands in Long Beach without luggage as well.
1/10

"not recommend flying with them ever"

✅ Trip Verified | SWA Canceled our flight to Vegas 3 hrs before take off (6:30am) via text 11/1/21. We were advised to jump online to re-book, by the time we did there were no flights available. We were meeting friends, pre-paid hotel, had Lionel Ritchie tickets and this was a vacation we had planned 10 months in advance. We never got to go because other airlines same day booking were astronomically high. We missed our concert, vacation and friends because of SWA employee no shows, this was the reason for cancellation. We complained to SWA and their response was a $150 voucher, after losing out over $1500 in hotel fees and concert tickets. Beware of this airline trying to make amends at faults of their own. Their customer relations dept are horrible and would not recommend flying with them ever.
1/10

"No one knew what was going on"

✅ Trip Verified | Absolutely the worst experience I’ve ever had at an airport/with an airline. We got to the airport at 1pm for a 4.35pm departure. We were moved to 3 different lines and eventually at 3.0pm we reached the ticket counter. When we reached the front of the line they then took people behind us that were on a flight that departed 10 minutes before ours. No one knew what was going on and the extra time we wanted to use to get food and other items was now gone and we had to rush to our gate.
9/10

"We could not be happier with the care and help"

Not Verified | Our flight from Albany to San Antonio on Southwest had us worried after the problems of cancelled flights a few weeks earlier. Also this was our first try at bringing a folding electric wheelchair for use at our destination as well as during the layovers. We could not be happier with the care and help with getting the chair aboard the plane and retrieving it at each destination. The personnel at the check in and the gates at Albany, Baltimore, and San Antonio, were superb. I would recommend Southwest to any traveler and especially passengers that need assistance. Southwest people are the best.
1/10

Not Verified | This has been the worst experience I've ever had with an airline, so many delays. Now I'm on a 2 hour delay from Dallas to Indianapolis and I won't get home until after midnight - unacceptable.
1/10

Not Verified | Continuing saga. After a three plus hour delay at John Wayne Airport and a thirty-six minute flight we get to spend another three hour plus wait in the McCarran airport since the delay caused us to miss our flight to Reno. They assigned us to group C boarding yet we had paid the upgrade to A boarding. When questioned they just said they'll refund our money. A lousy way to end a family trip to Disneyland. With the delay to fly down and back we could have driven and saved the sore arse, back and frustration. JSX or AHA here we come.
1 to 10 of 1393 Reviews