"Most staff were indifferent and rude"

Not Verified | Dreadful Business Class - Will never fly with SAA again. Previously one of top three airlines in the world SAA, Swiss Air and Singapore Airlines. Flew Perth to Johannesburg to Perth on old tired planes. The seats folded down and were lumpy like camping beds with a too short thin quilt to lie on, one small pillow and cover. Both seats did not initially work. The seat was much to short for my friend who is approx. 6 ft so he had to sit up most of the way unable to sleep. Most staff were indifferent and rude. Not one piece of fruit. This is not acceptable, we booked on Virgin and were disappointed.
1/10

"came to board as gate was closing"

✅ Trip Verified | Cape Town to Nelspruit. They did not call my name for last boarding. Checked in 2 hours early, had a problem with an airport cafe, came to board as gate was closing and they refused to put me on. Staff were aggressive, did not assist, expected more money for a different flight with no concessions made. Unprofessional and unpleasant.
8/10

✅ Trip Verified | Johannesburg to Mauritius. Flying South African in coach is a flash back to the 80's. Food (appetiser and main hot meal) was good compared to other airlines on a 4 hour trip. The service was very nice, and the bar well stocked. The seat had a lot of legroom (at least 33") for a person as tall as me (6'2"). The only downside was the entertainment, small scratched screens. 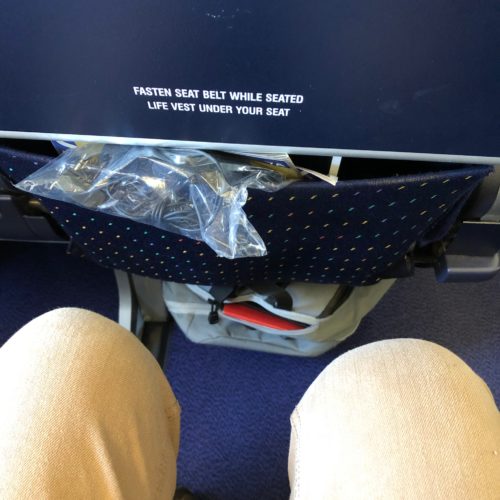 "the service was rushed"

✅ Trip Verified | Mauritius to Johannesburg. This is one of the older aircrafts that South African Airways has, an Airbus 340 with a configuration of 2-2-2 in business. I really like the A340's as they are very silent and safe (4 engines). Although there is not much privacy between you and your neighbour, the space between the rows is humongous: even if the person next to you sleeps, you don't need to step over her/him. The airline provides you with a mattress, a duvet as well as a big pillow. The food is nothing special for a 4 hour flight, but decent. The cabin crew are very friendly and answers any request promptly, However on this flight the service was rushed: you don't have time to finish your drink before they come with the meal trolley.
2/10

"flight delayed by half an hour"

✅ Trip Verified | Bloemfontein to Johannesburg. I am appalled by the horrendous service I received. I went to the airport in Bloemfontein with at least two hours to spare before we started boarding. Initially my flight was going to be at 5:00 pm and I would arrive at JHB international airport at 5:55 pm. However after not letting me know the flight had changed or even offering an earlier flight option I was told there is nothing they can do and the flight is delayed by half an hour. Because I needed to make a flight in JHB to Atlanta which is at the opposite side of the terminal I pleaded for reconsideration and nothing was done to help. We left at 5:40 pm and arrived at 6:50 pm however my connecting flight was at 19:51 and I was suppose to board at 19:00. Arriving at JHB airport no one was even willing to usher me to where I needed to be to make my flight in time. This caused me to run from arrivals to international departures (no one able to be any help), having to rudely jump the ques to attempt to make my flight on time and getting to boarding soaked in sweat. I feel this was so uncalled for and very unprofessional.
1/10

"never book with them again"

✅ Trip Verified | Hoedspruit to Cape Town. Hoedspruit is a nice small airport with an indoor terrace. The flight experience was overall OK for a 2h30 flight. The real issue I had was with the booking. I received a confirmation for a wrong date, then called the customer service right away and they never agreed to make a change without a 25% penalty fee. Very frustrating considering there was a problem with the booking system. I'll never book with them again.
1/10

✅ Trip Verified | Johannesburg to Hong Kong. As we got on the flight we noticed on my pillow there was blood, and our entertainment system did not work! I feel it is totally unhygienic. After telling the flight attendant about the pillow she just grabbed one from an open seat and did not even apologize. I will never use this airline again.
2/10

c✅ Trip Verified | Maputo to New York via Johannesburg. The entertainment system glitched throughout the entire flight to JFK and the seat function controls didn't work several times throughout the 17-hour flight (for up to 15-20 minutes per glitch period). Some people were stuck in a reclined position while others were stuck upright when it was time to sleep. On the returning flight, the TV screens were hardly responsive to touch and were very frustrating to use. The seats are hard and uncomfortable, if a passenger is seated next to a window, they can't step around or over their seatmate when the latter is in a reclined position. This means they have to wake up their seatmate to go to the bathroom, etc. The seat spaces are fairly cramped. For both SAA flights, I had to store my handbag in the overhead compartment for takeoff and landing. On the flight to JFK, they ran out of eggs for breakfast. This has never happened to me before. On the return flight for lunch, they ran out of salmon. On the departing flight, the flight attendant took away my untouched serving of butter and then, when I asked for butter later, said that each passenger is allocated only 1 serving of butter. Apart from the desserts, I found the food not that much better than what's served in economy class. For most of the departing flight, there was one overworked flight attendant serving our section, which meant that the service was very slow and they were not always prompt and sometimes forgot to offer hot towels, blankets, etc. I must say that my returning flight was much better in terms of service, quality, food, etc.) The lounge in OR Tambo is okay but a little chaotic, and the food looked unappetizing. The SWISS lounge for SAA business class flyers in JFK is awful. The food was okay, but the atmosphere was cold and staff were rude and distant. In general, the business class experience was certainly not worth the price of the tickets.
1/10

✅ Trip Verified | SA 260 on 29 July from Johannesburg to Frankfurt. About 30 minutes into flight, electricity went out and did not came back on for 10hr duration of flight. The air hostess was extremely rude and unhelpful. They did not notify the passengers as to what was the cause/reason for the black out. When asked, I was told ‘We will not notify the passengers as it is a safety precaution’.
4/10

✅ Trip Verified | Cape Town to Sao Paulo via Johannesburg with South African Airways. Worst airline ever. Disorganized, not very clean. Very old in every way. Very noisy, seats uncomfortable, little service. Food more like coach. Can’t believe I used lots of points for this experience. Worst business trip ever. Love Africa but need a better way to get there.
31 to 40 of 436 Reviews