✅ Trip Verified | Durban to Johannesburg. Airplane delayed 1.5 hours. I waited longer than the flight takes and they will only give a coffee voucher after 2 hours. No wonder they aren't a profitable company. Late for a meeting. I would never again trust this airline.
9/10

✅ Trip Verified | Lilongwe to London via Johannesburg. Wonderful airline to fly on, the aeroplane is in great condition with so many wonderful things available to the customer. Staff are very attentive and would make any other top class airline shy with how they ensure professional attention. Food is great and tasty. Seats are a little small but okay.
1/10

"delays have been ridiculous"

✅ Trip Verified | Lubumbashi to Johannesburg. Lately the delays have been ridiculous. Waiting for my flight to leave at 11:45 and left at 16:45. Wont issue again a ticket with them for sure!
1/10

"did nothing to assist"

Not Verified | Washington DC to Dakar. I purchased a round trip ticket to Senegal, West Africa for $2089 on July 28, 2019 for departure on August 9, 2019. A few weeks after I arrived, I was notified that South Africa Airlines was no longer offering service to Senegal. I had to travel four hours one way to Dakar to visit the South African Airways office. That was on September 19, 2019. Once I arrived at the office, I was offered to re-route my flight to Belgium with Brussels Airlines, which was not my choice because it interfered with my connecting flight once I returned to the United States. I would have to return a day earlier than that connecting flight, and I was told that was the only option available to me. South African Airways did nothing to assist me with getting an earlier connecting flight nor did they offer to give me a hotel or compensation for the inconveniences they put me through.
3/10

✅ Trip Verified | Johannesburg to New York. SAA are currently on a survival austerity campaign that is now reflecting in their Business class service and offerings. No longer do they offer pre dinner drink service and the finer parts of their service have been jettisoned. Salt & pepper cellars are packeted; the range of wines are weird - 2 chardonnays in a choice of 3 wines; no after dinner chocolates; breakfast no longer includes cereals, fruits and a main course. You now have to choose one of these 3. For a Usd 7000 airfare these penny pinching cost savings will not save the airline but will rather ensure its ultimate demise.
1/10

"she had seated me next to toilet"

✅ Trip Verified | Cape Town to Perth via Johannesburg. I broke my arm and needed to return to Perth for operation. When I requested a more comfortable seat on check in the staff complied. On boarding I discovered she had seated me next to toilet in a non recliner. The staff refused to attempt any change, a man stepped in and offered his seat.
2/10

✅ Trip Verified | Perth to Johannesburg. I do not sleep well on flights and rely on Entertainment System to occupy me. Sometime after take-off the Entertainment System was turned on. Some airlines turn on the system after un-docking from the terminal. Immediately there were issues with the sound being disjointed. Soon after (within 15 mins) I asked a stewardess about the problem. She said she would get back to me – BUT never did. The Entertainment System was unusable for the flight. This is unreasonable. Not once was any announcement made about the fault in the system. On leaving the plane I complained to a steward at the door and was told to complain to someone. I have email SAA Customer Service and completed this review.
3/10

Not Verified | Johannesburg to Dar es Salaam with South African Airways. The cabin crew on this flight seemed like they did not want to be there serving the passengers. There were instances where the staff seemed agitated by some of the requests of the passengers in front of us, and were very unprofessional and borderline rude.
6/10

"seats are blocked off for crew"

✅ Trip Verified | Johannesburg to New York. I flew on SA203 and booked a seat in the last row as I knew there were empty seats beside it. Seat 74D. I have a back injury and sitting long haul is difficult, so I was hoping to be able to stretch a little. I fly this route regularly, and always book this seat if it is available, and pay to do so in advance. As soon as I reached my seat I noticed the tray tables in that row were down. The purser for Economy was standing there and said she would have to move me. I asked why. "Because these seats are blocked off for the crew," she said. If they were blocked of how was I able to book that seat? And it is the seat I always book, I have never seen it "blocked off." I explained to her that I had booked it specifically and she just stared at me. I felt very uncomfortable. She then blocked off two window seats at the side with her own luggage, forbidding another paying passenger hoping to sit there during flight (15 hours). Her bag stayed on that seat during flight as well as during taxiing, take-off and landing, unsecured, and despite turbulence. Twice during the night another cabin crew member told me abruptly that someone would be sitting in my row as their entertainment system wasn't working (several do not). I did not object. But that person never materialized. So what is SAA's policy about this last row, and also about bullying passengers? Finally, the same purser and an older female cabin crew member who had been working forward, also spent a lot of time complaining audibly about another crew member whom the purser said she would "like to stab in the back", it was incredibly unprofessional. 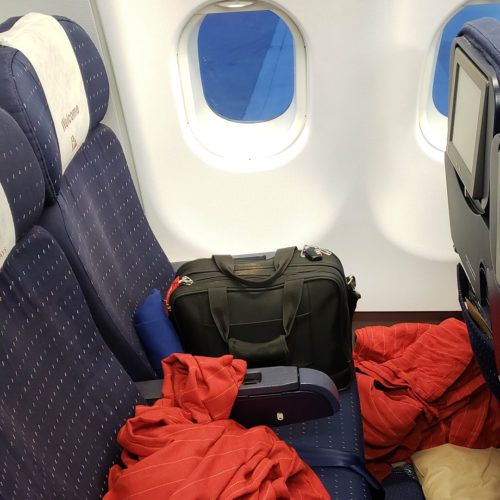 "Most staff were indifferent and rude"

Not Verified | Dreadful Business Class - Will never fly with SAA again. Previously one of top three airlines in the world SAA, Swiss Air and Singapore Airlines. Flew Perth to Johannesburg to Perth on old tired planes. The seats folded down and were lumpy like camping beds with a too short thin quilt to lie on, one small pillow and cover. Both seats did not initially work. The seat was much to short for my friend who is approx. 6 ft so he had to sit up most of the way unable to sleep. Most staff were indifferent and rude. Not one piece of fruit. This is not acceptable, we booked on Virgin and were disappointed.
21 to 30 of 435 Reviews