We booked our holiday through Monarch but it was not clear from their website that we would be travelling with Small Planet. Was a bit sceptical about flying with a company I had not heard of before. We needn't have worried. When we checked in we were able to book extra leg room both ways for about £20 per person, each way. The seats were good. The crew were also very helpful, friendly and always smiling, something some other airlines lack. Food was ok. Would travel with them again.
8/10

We booked through Travel Republic and had never heard of Small Planet Airlines so looked at reviews. Their website was clear, concise, helpful and gave us the confidence that flying with them would give us no worries. Modern, clean aircraft, friendly, hard working staff. A very pleasant experience.
2/10

If you like to have decent leg room on a flight think before booking with this airline. Also, we did not know it was an indirect flight home until we arrived in Skiathos. 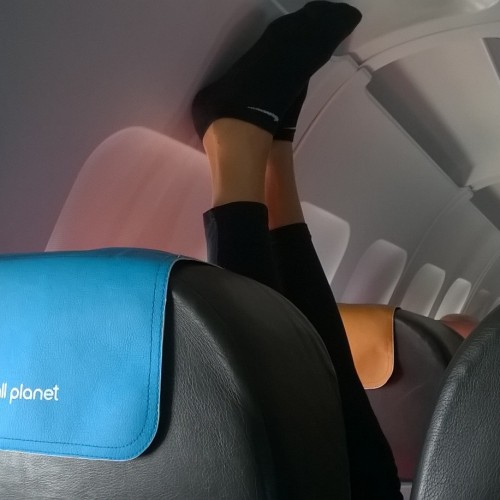 Skiathos holiday 05/06 to 19/06/15, flights booked 03/04/15. Flight times changed on 26/05/15, now approximately 2 hours later. Checked online flight departures from Gatwick South on the day before flight - no Small Planet flight listed. Got travel agent to check flights and they confirmed as advised on 26/05. Checked in okay but boarding pass wouldn't allow us through the automatic gate, pass had to be checked manually. On board aircraft 10.50 for 11.05 flight but "Baggage duplication" - all luggage being checked, then unloaded and passengers advised they would leave plane by front steps, identify their baggage and return to seat via back steps. Before this happened someone recounted the baggage and we actually had the right number! Took off 13.03, so almost 2 hours late. Flight okay, blankets and sweets distributed. One week into holiday and advised that our return flight time had been changed 2 hours plus later than the revised time. Had to change car hire/car parking times for the second time. Checked in early at Skiathos, when flight called was stopped at departure gate as seat duplicated, put to one side whilst other passengers boarded. Ended up with 16 passengers with duplicated seats, all allocated at check in a few hours previous! Odd seats then allocated to us and we were the last to board. Me in row 12 (extra legroom row), wife in row 2. Adjacent seat to me available but my wife wasn't allowed to move until the flight had commenced as it would "Unbalance the aircraft for takeoff", later allowed to move. Flight indicated as "Direct" at departures but in fact stopped at Volos to let passengers on/off and refuel. Flight okay, landed at Gatwick 23.00. On original times we were due to land at 18.25 so 4 1/4 hours later than originally anticipated and with a 3 to 4 hour drive home, not ideal. I will definitely avoid Small Planet in the future, too many flight time changes causing worry and hassle, their ground service was the worst I have ever encountered.
10/10

As with a lot of people never heard of Small Planet Airlines so was a bit apprehensive but let me tell anybody who is flying with them there is no need to worry. Modern, clean aircraft, friendly, hard working staff. A very pleasant experience.
3/10

Booked The Gambia Experience as only company flying direct to The Gambia at this time of the year. I had never heard of the airline but had no problems with previous airlines the company used. Late departure going out and return. Lack of hand luggage space as they used it to store the food for the outbound and inbound flights, blankets and pillows. No in flight entertainment. Staff used front and rear rows for their breaks. Although seats slightly wider, a lot less leg room so bad the two men seated with me had their knees cramped against the seat in front. Food was acceptable. Would not travel with them again. I would rather fly non direct to Gambia than fly with this airline.
8/10

First time flying with them and had never heard of them. First class treatment from all staff, food and drink good and economical, attention to detail for disabled passemger. Only delays were at the other end but kept informed at all times.
10/10

My husband and I were the only 2 passengers on the plane coming back from Corfu to London which was a surreal but enjoyable experience apart from the flight being late. The cabin staff were friendly and attentive. It was our first time flying with this company and we would use it again.
1/10

Flying to Corfu in June was good and even though economical was a good flight out. The return however was not. We got to Corfu airport in good time, not many in queue, got to desk and handed over tickets and passports and after a few minutes we were told we were not on the passenger list for that flight. Told to wait an hour until they had put all passengers through then got back to desk and told there were 2 cancelled seats which we could have! Even though we got on that flight it was poor service and one of the 3 toilets were out of order so just two toilets for a full airbus!
10/10

We flew with Small Planet Airlines to Zante in June. On arrival at airport we checked in quickly and flight was on time. Staff very good and friendly, boiled sweets were offered on landing. Flight home delayed half hour but didn't matter. A pleasant flight, captain kept us informed throughout journey. Definitely would use again.
61 to 70 of 85 Reviews