"company were unmoved by the inconvenience"

✅ Trip Verified | The flights to the Scilly Isles are notorious due to the weather Skybus has reduced the number of destinations it flies beyond its own hub at Lands End We chose to fly from Exeter as the drive down to Lands End in the summer is a nightmare and we were travelling from London We drove 4 hours to Exeter Airport for the outward leg. The flight was great and delayed only an hour We arrived back at St Marys for the return flight 5 days later and discovered one of their twin otters had gone tech. It was hard to find out this information as no announcements were made but check in wasn’t progressing and finally the news broke! We eventually found out they were going to split our flight into 2 Islander flights (8 seater flights in 2 sequential flights to Lands End) The remaining otter was used to fly the scheduled Lands end flight After reaching Lands End we were going to be driven to Exeter- a 2/12 hour drive Apologies from skybus staff were few and far between ; one child burst into tears! We were told it was the best solution to ‘preserve their schedule! It was obvious this solution was best for the company but not for the passengers . The remaining otter (with sufficient range) should have gone to Exeter and the islanders used to shuttle to Lands End to minimise the overall delay to ALL passengers We arrived in Exeter 4 1/2 hours late ; a very unsatisfactory end to the holiday with a further 4 hour drive in our own car ,exhausting ! It appears the company were unmoved by the inconvenience and not prepared to extend operating hours to find a satisfactory solution. Be warned! 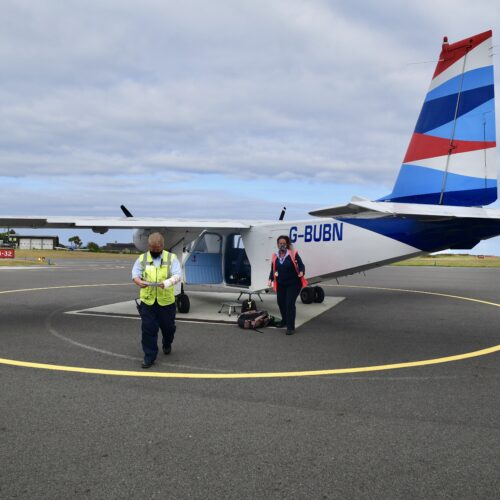 Columbus to Punta Gorda. Return leg was almost comical - seems they only have one moveable flight of stairs in Punta Gorda. Not good when you have two planes arriving at the same time. We got to the airport and waited while they deplaned and boarded the plane next to our plane. Well almost an hour later they moved the stairs to our plane - what was amazing was the incoming passengers on this flight were still sitting on the plane 60 minutes after they arrived! So we waited and waited we finally boarded and took off 90 minutes after scheduled departure time. Also note that there is no customer service center for this airline. They also have a very annoying practice of asking "who on this flight got the $10 fares?" We paid over $400 for our tickets - I certainly could care if the guy next to me paid over $200 less. This airline is just not worth it. The only thing going for it is if you're lucky enough to get one of the cheap tickets - any ticket priced over $30/leg I'd opt for any other carrier.
3/10

FLL-CMH. the latest US start-up airline that is embracing the very low cost/high restriction fare - ala carte pricing for checked bags and everything for sale onboard model. My morning flight left Ft. Lauderdale on time and arrived in Columbus a few minutes early. I had checked in online and needed no assistance as i was not checking a bag. The friendly flight attendants offered a sales catalog after boarding and customers had a large selection of food and drink items as well as duty-free type personal items (jewelry/perfumes) also for sale. My return flight was delayed on landing and then reported a problem with the pilot's radio which was a surprise given that the airline operates a brand-new fleet of narrow body Airbus. Finally after a delay of more than 4 hours we boarded another aircraft that had arrived late from another city and finally made it home by 2:15 a.m. On this flight all entree items were sold out and only snack items were available to eat. Customers were not offered any sort of compensation for the delayed flight just apologies from the airport and inflight crew.