"they don't seem to care"

✅ Verified Review | We booked a flight from Kuala Lumpur to Amsterdam via Shanghai with China Eastern Airlines. The part from Kuala Lumpur to Shanghai was operated by Shanghai Airlines. Departure time was 2.10am out of Kuala Lumpur and expected arrival in Shanghai at 7.20am. The inbound flight already arrived 30 minutes late so we boarded the plane at 2.30. The seatpitch at seat 33A and B was okay and after showing the safety instruction video on the screens we expected to depart. To our surprise the cabin attendant announced a delay of 3 hours due to ATC-restrictions by ATC Singapore. The gate was already disconnected and the boarding door was closed so we had to stay in the plane for over 3 hours. A cup of water and a meal were being served at 3am. After that, we had to stay in the plane and we were told to stay in our seats. There was no information from our captain and the flight attendants hid in the galley. Out of the blue the plane was pushed back from the gate at 6.05am. Without information we departed out of Kuala Lumpur. No idea how long the flight was going to take and what the arrival time in PVG would be. During the flight they served one croissant (which origanally would be served during the dinner we received at 3am) and half a cup of Chinese tea. Our bags never made it to our final destination and are still in China. Today, 3 days after the flight with Shanghai Airlines/China Eastern, we still haven't received them back nor did we get any info about our bags. My advice is not to fly with Shanghai Airlines. They don't seem to care about passengers and their bags and leave you without any information. 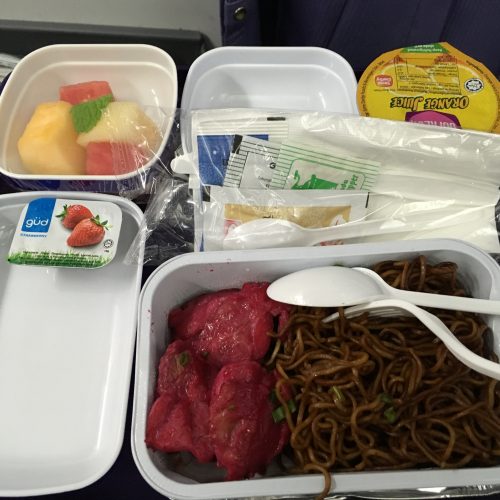 "fly them again on this route"

Seoul Gimpo to Shanghai Hongqiao return for a long weekend. As with all Gimpo international flights, it was 100% full and extremely short. Plane was clean, in good condition. Only a bottle of water was given with a tray of food. Ignore the food as it's just beef and rice in some kind of sauce. The food seemed the same in both directions. As far as cabin service, all of the Korean staff were polite. GMP-SHA there were a few, obviously tired and sour Chinese attendants wearing a visible frown and throwing the food on the tray. At 240 USD round trip all in, I don't really care about the service on these short flights. No seatback TV, but again, the flight was barely an hour and a half. No time to watch anything. The plane was clean, leg room adequate and, surprisingly, on time given Chinese airspace. I'd fly them again on this route.
1/10

Tianjin to Shanghai. Terrible service, terrible food and terrible airplane. Dirty and smelly, the cabin staff so miserable and horrible. Delays again with no announcement or no apology. If you come to China and you fly on a scheduled not budget airline, don't choose Shanghai Airlines.
10/10

"absolute disgrace of an airline"

Hong Kong to Shanghai Pudong on Shanghai Airlines. For reasons as yet unexplained to me, we boarded the aircraft at 16.45h and remained on the aircraft on the ground until 23.40h (yes, an unbelievable 7 hours), when we were then told that “the flight is now cancelled” and we deplaned again. During the time onboard neither the captain or first officer spoke with the passengers and the cabin crew made three announcements stating only that "we would be updated on the departure time later". An absolute disgrace of an airline and crew.
1/10

The plane had a foul odor throughout the flight. The plane sat on the tarmac for nearly an hour before going anywhere. The food was hardly edible, though not necessary for the short 2 hour flight. Lukewarm beer was served free of charge. The plane itself was old and in need of retirement. The seats were about as cramped together as any I have seen.
1/10

I fly with this airline regularly between Shanghai and Hong Kong because it's one of the few airlines that lands in Shanghai Hongqiao airport, which is more convenient for me. Convenience is my only motivation, as this airline is bad. Poor food. Staff will tell you to switch off your phone 30 mins before landing, but do not stop customers using phones. Seats are uncomfortable. I really wish there were more options between SHA and HK - but unfortunately I am stuck with Shanghai Airlines.
na

FM9312 May 28th 2015 Guangzhou to Shanghai. I have been traveling with this airline for four years when on occasion I cannot find another airline that suits my route/timing requirements. I find them to be consistently very delayed with little or no information in Chinese or English on the duration of the delays. I generally feel that a delay of two hours is 'par' for this airline and anything leads than this is a very good result. I would strongly suggest against flying this airline if on business or if arriving on time is a priority.
5/10

We bought two tickets to travel from Melbourne to Beijing via Shanghai (late Dec 2014). Without any prior knowledge we were put on Shanghai Airlines instead on both legs. Outbound aircraft was a bit old but the inbound was rather new and clean. IFE (English programs) are rather limited and not up to date. They didn't change the movies selection (our outbound and inbound flights were in different months). Established airlines usually refresh the IFE at the beginning of each month. Food was ordinary very Chinese and please bring your own food if you are hard to please. The FA served water very regularly two thumbs up. Too many announcements (turbulence related) and we were very annoyed. Passengers should have some common senses and not require reminders from the FA's. All in a very basic airline.
8/10

From Pudong to Shenyang on December 12. Flight on time which is already a big plus as most flights out of Pudong are delayed by "traffic control". Even with the heavy snow in Shenyang landing was smooth. Cannot comment on the food never eat airline food. Very annoying is the constant barrage of announcements in Chinese and not- understandable English prevents you from taking a nap. Gold status on Skyteam is never honored in China bag as one of the last to appear on the carrousel even with the priority tag on it.
11 to 20 of 72 Reviews