✅ Trip Verified | Budapest to Shanghai New Years Day 2020. Flew on a newer B787-9. They had opened not less than 8 check-in counters in Budapest of which 4 are for Sky Priority only; thus very comfortable. BPs issued immediately including the following flight with China Eastern SVG-HKG (counts as international flight). As being Flying Blue Silver I was accessed to Sky Priority counters and was checked in in a few Minutes; prioritised in all queues and boarding, and eventually (at gate) upgraded from Economy to Economy Plus as flight was full in lower classes and in business. I was lucky not to have my original selected seat as all seat were taken in economy. Trip went smooth, captain made kind announcements. FAs were also kind and firm though listening. Lots of food, they ran out of wine and beers within an hour after departure. Very embarrassing but quite typical for Chinese airlines (apart from Cathay Pacific?). Bought own supplies of champagne from airport. FA off course accepted it as they know they are running short, especially on a New Years’ Day. I brought my own glasses and let them chill down my champagnes. Good food, two full hot meal rounds with options. Catered from Budapest, thus Western oriented unlike when departing from Shanghai. I had at least 6 hot meals on board (many were meals in excess as passengers were stuffed after New Year) and could have had more if I could manage. At breakfast service, still 24 dinner meals were left. Clean toilets throughout. Blankets and earplugs provided. Individual IFE was extremely good and technically the best I have seen in the skies. Content limited to some 15 Western movies but that suffices as their choice goes beyond the most popular Hollywood stuff. Simultaneously, plenum monitors display the current flight data and maps. Arrived 25 Minutes early in the huge, completely over-dimensioned Shanghai airport. I rate them high as for Qatar Airways though the product pros and cons are quite different. The trick is not to have Westernised expectations and to appreciate all, what they do for you if you are firm with wishes and appreciative. Best with Shanghai Airlines was the new aircraft, its punctuality, good service, surprising foods (I tried and finished all sorts of dishes they offered, all were fairly tasty), and an unbeatable price.
9/10

"was a very positive surprise"

✅ Trip Verified | Hong Hong to Budapest via Shanghai. Flew on A320 on HKG to Shanghai while in a newer B787-9 on the long haul to Budapest. China Eastern marketed flights. The long haul leg was flown by their daughter company Shanghai Airlines to Budapest. Amazing experience, pure adventure. Bought this ticket some months earlier for the high season to Europe as a huge bargain for 347 USD including 2 x 23 kg of luggage which is welcomed near X-mas. It costed me in addition positioning and depositioning flights to which I volunteered as I needed the extra miles for my elite status. However, I was notified (2 months before travel) by my online travel agent (Travelgenio), that the return flight from Budapest was preponed by 1 hour. Then, I was forced to change as I would not be able to arrive in time for the new departure. I then decided to change plans completely and celebrate New Year in Budapest instead of Vietnam. Thus, I postponed my return travel from Budapest by 3 days. This was done by emails to the Travel Agent (no response) and then phone calls to Ch. Eastern in Brisbane and Shanghai. Eventually, it went smoothly and I was changed to my wish without added costs (apart from changing onward flights beyond Hong Kong with another airline). That even allowed me to do another, cheap detour to Hanoi on my way back to Hue. The homepages of China Eastern and Shanghai are difficult to penetrate and to book or change bookings from. Unless one has a Chinese telephone number. However, 10 days before departure I could access seating and chose freely my favourite seats, even got 1 of 4 legs in exit seat. However, one cannot access the entire booking unless registered with CE’s flyer program in which I am not interested. Apart from that it was a good adventure: a complicated travel where everything could have gone wrong, but all went smooth. Arrived in Hongkong early and was able to check-in 6 hours before departure as the airline have many departures daily. No queues at the check-in and the ground staff were good and answered questions though fearing speaking English. Two BPs issued immediately. Flying HKG-PVG is considered as international flights though it could be considered as domestic. That give the advantage of not leaving transit while leaving HKG and passing PVG. First flight was on an aged A320. Extremely controlled and organised priority boarding at gate where all business and elite flyers were boarding entirely before the remaining passengers. Onboard, newspapers and 10 channels of music were offered (bring own headset). Shared monitors showed some educational movies. Food was limited to a tidy pack of biscuits. Drinks were unlimited (water, tea, coffee, beers), but only for 1 hour out of the 2½ hour long flight: during ascend and descend all services were closed down until 40 Minutes after kick-off and again 40 Minutes before landing. That leaves passengers with very limited time of service. FAs were fine. The second flight were by Shanghai Airlines’ Boeing 787. It was a very positive surprise and was faultless. Modern aircraft, good food and service, 2 hot meals offered at dinner and then again at breakfast. Frequent drink rounds. Button calls answered quickly and needs were addressed instantly. Individual IFE on touchscreen monitors was very easy and quick to operate with a good number of Western and English translated movies. Toilets clean. Both flights took off earlier than scheduled.
1/10

Not Verified | Shanghai to Guilin. The company cancelled their 1st October flight without reason on September 30th evening (few hours before departure). Only option proposed was to take a flight on October 3rd instead (2 days of holidays ruined). We finally decided to cancel the whole trip as it did not make much sense and we were asked to pay for the cancellation fee of the return ticket. Just unbelievable.
1/10

"two days of my trip ruined"

✅ Trip Verified | Shanghai to Phuket. I bought this ticket because it was cheaper than the other options. The flight was alright, the attendants were nice, but when I got to Phuket... no bag. I had checked just one bag with all my stuff in it for my trip. Now it’s been 2 days since I landed and no one can tell me where it is. It was scanned in Shanghai and seems to have disappeared. My emails to the company have gone unanswered. My hotel has been calling the airport each morning to check and see if it has arrived and so far, nothing. The first two days of my trip have been ruined. I came here to do some training, yet all of my training gear was in my bag.
1/10

✅ Trip Verified | Shanghai to Seoul. The first and last time riding Shanghai Airlines and China Eastern Airlines. The check-in was chaotic because only 3 or 4 check in counters were opened. During the security checkpoint, the checking was way too slow for me, and I was waiting 3 hours. It was the final call for boarding- and I was bussed, and I rode the airplane, but it was delayed for 16 hours for no reason, staying in the airline and the flight attendant gave only me nothing. No offerings, no services, and no refunds.
6/10

"it was a pleasant flight"

✅ Trip Verified | Shanghai to Kota Kinabalu. Shanghai Airlines code shares with China Eastern Airline. It was a new plane and the flight experience was good. Although one of the air steward seems like he hates his job but overall it was a pleasant experience. The meals served was exactly the one I was served on my trip to Shanghai. Nothing special, something to fill an empty stomach. The seats are comfortable whereby the headrest was tiltable. We were given pillows and blankets on the flight but the flight was kinda warm even though we flew during the night. Coming from someone who cannot really stand on cold, the flight was really warm. Overall, it was a pleasant flight, nothing special to praise or criticize about, at least it got me safe back home.
1/10

✅ Trip Verified | Shanghai Airlines flight from Guangzhou to Shanghai. The flight was more than two and a half hours late. We had to get on a follow-up flight and then we went on the connecting flight. Waiting for more than 4 hours - no basic refreshments were offered to the waiting party. We asked the desk clerk to call or send a message to the company with whom we had to continue the flight, but it was refused. The counter clerk also did not give any details while waiting when the flight would leave. The flight itself on a worn-out B737 plane, broken chairs. A flight meal under any inspection. Since the flight was delayed and because we had missed the connecting flight, we turned to the company for an alternate flight. The company disclaims any liability and sends us to the company of the connecting flight. Perfect contempt. We got stuck all night at the airport, no hotel or refreshments were provided. A blatant disregard for their commitment to the passenger.
7/10

"just at the standard level"

✅ Trip Verified | Shanghai Hongqiao to Lanzhou. As a Skyteam Elite member I could use the priority check-in counter and priority security lines. It was very wonderful. The service of cabin crew was just at the standard level. The meal was simple, and the kind of the drinks was not enough. The seat was comfortable. 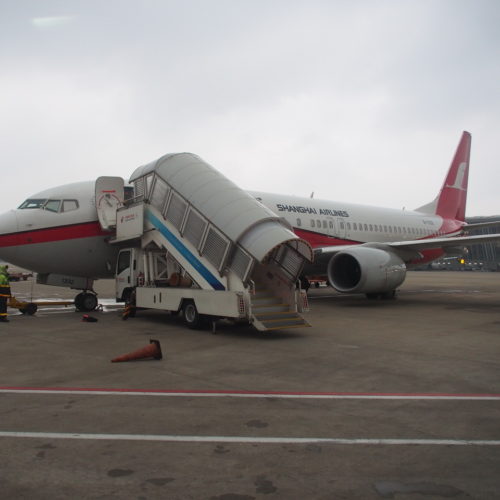 "have the worst customer service"

✅ Verified Review | Shanghai to Kuala Lumpur. My flight is in December and they change the flight early and we don’t have enough time to connect. Expedia and myself have been try to contact them for the past week and nobody pick up the phone. They have the worst customer service and if possible do not fly on Shanghai Airlines. I am still waiting for them to answer their phone.
3/10

"we had to go standby"

✅ Verified Review | Never use your frequent flyer miles from one airline and get placed on Shanghai Airlines. We had a confirmation number and ticket number from our partner, and Shanghai Airlines could not locate us in the system so we lost our reserved seats and had to go standby. Ticket counter said we'd have no issues on return flight. Guess what? We are standing in Bangkok as I type with the exact same problem with a sold out flight. Seems they don't put you in the system if you are using another airlines miles, even though they are partners, or at least that's how it looks from our end.
1 to 10 of 72 Reviews