"I would avoid flying with them"

✅ Trip Verified | The worst airline ever! The flights are always delayed and they have most ridiculous excuses for it. Last time we spent 6 hours in the airport from departure due to delays and we've been given 4 euro vouchers to spend on food, although, the sandwiches in the café cost more than that. I would avoid flying with them.
1/10

"I will not fly with Ryanair anymore!"

Not Verified | I have flown with this company 3 times for 3 different destinations, and, every time the flight was delayed, last week, for example, it took off 1.5 hours later than it should have. Same on both ways. They earn much money from this delay policy and people shouldn't accept it. They ruin your connections and they ruin you plans for vacation! I will not fly with Ryanair anymore!
1/10

"has to be the worst customer service"

✅ Trip Verified | After Ryanair had cancelled my flight to Prague just 1 day before the flight, I was forced to place another booking for over £340 to make sure I was able to travel, I couldn't take the risk. After the trip I'd spoken with an agent and they agreed to process a refund excluding the extra for booking through a third party. They lso advised that I would receive my refund within 1 week. I chased this up another 5 times throughout April, May & June. Every time, the agents said it was a processing error & the money would be paid within the next week and it never was. When I requested a confirmation email, each agent has told me this is not possible. After speaking to an agent today (we are now in July), the agent has again confirmed that Ryanair will be processing the booking fee and nothing else. After speaking with an agent on the phone today; I have been advised that I will receive a confirmation email that my refund has been processed, something I have been denied before. The agent also advised me that payment may take up to 28 days. This is another 28 days on top of the 60+ days since Ryanair advised that I would receive my payment in the next week. This has to be the worst customer service in business.
1/10

"They destroyed our family vacation"

Not Verified | Ryanair is the worst airline ever, I do not even recommend this to my biggest enemies. We were supposed to fly at 8.35 to Marseille. We got through security and we waited for the gate to open. But suddenly our flight info disappeared from the display, it said that there is no gate open for it. After 10 min. they tell us that the flight has been cancelled and that we must leave the airport immediately. They didn't give us any reason or any compensation for it. They destroyed our family vacation. So now we can't do anything about it and we must accept that Ryanair won't get us there. After a few hours, we were told that the plane just didn't arrive. When we tried to get a refund for the tickets, they told us they will give us only one ticket, because the flight back technically didn't get cancelled so they won't give us the money back. With that said, the lesson learn is to never fly with companies like Ryanair!
1/10

"Don’t be fooled by the affordable prices"

✅ Trip Verified | Don’t be fooled by the affordable prices. You will end up paying way more than expected. They charge $30 Euros to check you in and print your boarding passes, they charge a lot if your bag is overweight. They allow carry on bags but they must be super small in size. If you are traveling from the US and the carry on is a good size for other airline standards, it will be too big for this airline, therefore you will need to send it as a checked bag for an extra price. They have so many ways of making you pay a lot at last minute at the airport. Will never fly with Ryanair again.
1/10

✅ Trip Verified | This rating is for a flight from last year that was cancelled shortly before the date and the only possibility was to book another flight with other company so that we can fly back to Brussels. I was assured that all costs will be paid back. Now after 1 year I am still waiting for a decision if they are going to refund the money. To be fair the craft is mostly friendly and for a cheap flight you can't put high expectations and start to complain.
9/10

"cannot fault Ryanair on these flights"

✅ Trip Verified | Outbound and inbound flights both were delayed, but this is not always the fault of the airline. Staff in general friendly and both planes were acceptable clean. We booked extra legroom seats upfront, which is recommendable and worth the extra money for 4h+ flights. Food and drinks on board more then ok at acceptable prices. Again I cannot fault Ryanair on these flights which were of great value!
1/10

"treat its customers so appallingly"

✅ Trip Verified | I spent about an hour trying to check in on line the day before departure but it wouldn't work. I contacted customer services via on line chat and was ultimately told I could check in at the airport for free. When I arrived at the airport I was met with an unbelievably rude and aggressive woman who wasn't interested in my issue and wouldn't even read the screenshot I had of the conversation. She simply said she didn't have a record so that was that! Totally unnecessary, it's difficult to understand why any company would treat its customers so appallingly without due cause.
1/10

"we don't accept your apologies"

✅ Trip Verified | My husband bought a round-trip ticket Tel Aviv-Berlin. At the beginning, the flight was delayed for several hours, and then, instead of Berlin, the plane landed at 2 AM in Hannover. Then a fabulous show began: the pilot, upon landing, announced that the passengers had nothing to worry about and a bus to Berlin would be organized. As a result, the passengers were denied a bus to Berlin / hotel - they were abandoned late at night at the airport in other city at a time when public transport does not work. In addition, passengers flying with luggage were left without it, as the luggage was sent to Berlin. And now Ryanair sent me an "Apology for the flight delay". No, Ryanair, we don't accept your apologies for the "flight delay". This is not the provision of the declared services we paid, which caused a significant financial and moral damage. 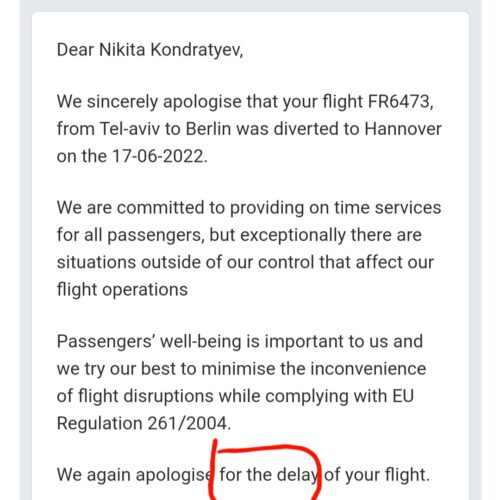 "This airline is a total farce"

✅ Trip Verified | This airline is a total farce. If I could give it a negative one I would. They put us on a the plane knowing we would have weather delays and we sat on the tarmac without any service. I will never fly Ryanair again. I am fine spending a little extra money to get some logic.
1 to 10 of 2035 Reviews