✅ Trip Verified | An extraordinary trip from Istanbul to Casablanca with the Royal Air Maroc, a very professional staff and the cabin well equipped with all amenities to make you forget the 5 hours of travel.
10/10

✅ Trip Verified | Marrakesh to Porto via Casablanca. The boarding in Marrakech was at the scheduled time, allowing the plane to take off about 25 minutes before the scheduled time and reach Casablanca almost at the time it should have left Marrakech. The crew was very efficient and attentive, which made the trip go smoothly. Despite the short trip, the plane had comfortable seats in the class in which I traveled (economic). On the Casablanca-Porto trip, the crew was equally friendly, helpful and attentive. There were newspapers of various kinds available, either in French or in Arabic. The seats were comfortable and a light but varied meal with fresh and tasty products was served. Overall the trip was great value for money and without any delay.
1/10

"filed a claim to receive compensation"

✅ Trip Verified | The worst airline experience I have endured. I had 4 flights (connections through Casablanca to and from Europe) and all four were 3+ hours delayed. One of my return flights was cancelled without explanation 2 days before the start of my trip and little was down by way of creating a solution. As well, my bag was lost for the first 2 days of my trip which included a bridesmaids dress needed for a wedding. When I called multiple times to track the bag the airline had no idea where my bag was and said it would be returned within 2-21 days. I was informed that there were airport strikes in Casablanca and staff were messing with the customers as a form of striking. The employees lied to me and never offered explanations for the four delayed flights. They delayed my return so much that I missed my connection and had to unexpectedly stay the night in Casablanca. There were dozens of other passengers in the same predicament as I, all on differing flights. I've filed a claim to receive compensation for the ordeal and received an automated message that someone will try to reply to my claim within 60 days.
5/10

✅ Trip Verified | Montreal to Beirut via Casablanca. Flights rescheduled for more than 5 hours so my arrival turned to be + 2days instead of +1 day. Both flights were delayed for more than 1,5 hours. Ground staff in Casablanca were rude and unfriendly to me.
2/10

"1.5 hrs without any communication"

Not Verified | Casablanca to New York. We were sitting on the plane for 1.5 hrs without any communication from the captain or the crew. Upon arrival we saw the email sent with apologies which totally dumb. After arriving to New York we are waiting for the luggage for more then 1.5 hr.
1/10

✅ Trip Verified | London to Bamako via Casablanca. I have just returned from Mali. Utterly shocking experience. Bags were missing for five days. To avoid answering questions, staff simply put the phone down. Bags finally turned up two days before I left to return to London, which I did yesterday. As I write, my baggage has gone missing again.
1/10

"gave me an aisle seat"

✅ Trip Verified | Algiers to Casablanca. I booked a window seat and I want to have my window seat. When i arrived to Algiers airport they changed my seat and gave me an aisle seat. It is unacceptable as i paid a huge amount to avoid any kind of change. When i told them so they told me i should’ve arrived earlier. They sell business class tickets and change whatever they want!
9/10 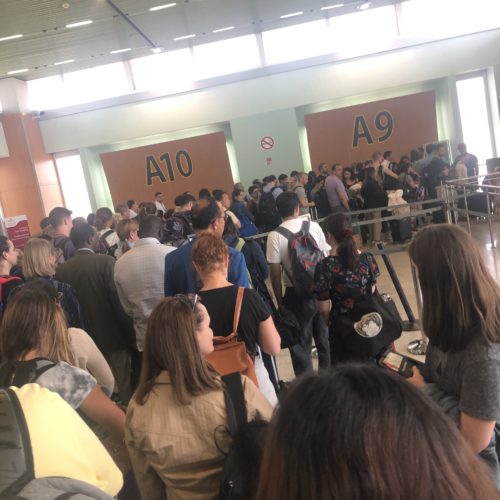