✅ Trip Verified | This A319 business class operated in a 3x3 configuration, with 3 Biz Class rows, middle seat empty, ala typical Euro Biz configuration. Initially a disappointment as was expecting 2 rows of 2x2 (per Seat Guru) with more spacious seats, but seat 1F had plenty of room and the bulkhead had a cut-out for additional foot-space which was unexpected/appreciated. Food edible (if mediorce) but more than made up for by very attentive service from flight crew. My flight attendant worked tirelessly throughout the short 3hr flight, she was kind, friendly, attentive and my glass was never-ever empty. Altogether a really enjoyable flight and Take-Off/Landing bang on time. Having been nervous about flying an Aeroflot off-shoot have to say this was one of the most enjoyable short-haul flights I've had in a long while. Rossiya recommended.
8/10

✅ Trip Verified | Moscow to Vladivostok. Flight codeshared with Aeroflot. What can I say: Rossiya is cheaper but not worse. No IFE (personal screens existed but didn't work) - is the only major problem. But the cabin is more comfortable than in Aeroflot's 773s - its 3x3x3 seats while Aeroflot is using 3x4x3. So the seats are wider, the pitch is big enough so I'm quite a tall person (190 cm) felt comfortable. Food ok but the onions they provided for breakfast were more suitable for dinner. Overall would recommend Rossiya.
10/10

✅ Trip Verified | Friendly airline and friendly price tag. From Moscow (Vnukovo) to Prague. This has been already my third experience with Rossiya (previous flights to/from Barcelona). Normally, I prefer Aeroflot and in some cases used CSA or TravelService. Rossiya is fairly OK - easy online booking and check in, swift drop off at Vnukovo airport. No queue. Standard ticket incl. 20 kg baggage, 5 kg cabin baggage and seat selection (unless you wish to pay 500 Rub for extra leg room in front). Plane was new and clean. Leather seats comfortable and with sufficient legroom. We were served complimentary sandwich and cold/hot drinks. In fact, Aeroflot would not offer much more, CSA and TravelService are no frills. Staff were friendly, helpful and efficient. Flight was on time. Based on my experience, I would rate Rossiya well above TravelService or CSA and close to Aeroflot economy (its mother company). However, Rossiya is a clear winner in terms of value for money. Overall a pleasant experience.
6/10

"decent service for such a price"

✅ Verified Review | Simferopol to Moscow Vnukovo. Was very surprised when saw aircraft type Boeing 747-400 while booking, and actually it was - which happens rather rarely for a 2h flight! Booking and online registration were done via Aeroflot interface and were quick and efficient. Ground staff were a bit annoyed but not rude. Simferopol airport doesn't have a possibility to serve wide-body aircraft near the terminal building, so we had to get to the plane by bus and it took a long time. The aircraft was a bit tired but nevertheless convenient, also I have no complaints for the cabin staff. Food (including a cup of water/tea/coffee and a sandwich) didn't look appetizing. The cabin is equipped by an ancient IFE system but it's not working for now. Came to Moscow in time, no delays. I managed to book this ticket rather cheaply (90$ OW, with baggage) so this is a decent service level for such a price. OK for short flights, but I consider that travelling this airline on long-haul routes may be bothersome.
4/10

✅ Verified Review | Moscow to Petropavlovsk. Needing to go to Kamchatka for work, I decided to pay for business class, as I didn't fancy the 8-hour flight from Moscow in economy. Nominally part of Aeroflot, Rossiya Airlines is nevertheless far from an equal to its mother company, and I was disappointed when I realised that the flight was operated by RA, as I have come to esteem Aeroflot on longhaul routes in both business and economy. Online check in was easy, and baggage drop was handled at Berlin Tegel by UTAir, who flew me the first leg. On arrival at Moscow's Vnukovo airport, I went to the pretty decent Rossiya Airlines lounge where I used the wireless, had a coffee and ate some fruit before going to board. Business class passengers (both of us) had a small shuttle to the plane, which allowed us at least to skip the crowded main bus. The plane itself was freshly painted with a gorgeous mural of an Amur Leopard's face plastered over the nose, which looked amazing. Inside, however, the cabin was quite aged, but the welcome was warm (one stewardess spoke English well) and I was glad that the business cabin was empty. The stewardess informed me that the entire plane's entertainment system was not working, as if she was letting me know that one of the meal options was unavailable: she seemed totally unbothered by this, and while of course I was prepared with my laptop and a bunch of series, this seemed really poor and I would have been furious had I be flying west and wasn't intending to sleep. A meal was served promptly after take off (salmon, rice and vegetables, salad and a dessert) that was of the standard you'd expect on a medium quality European airline's economy section, and then I went to sleep. The business seats recline fairly well, to around 80% and were fairly comfortable, meaning I got at least 6 hours of shut eye, which was the main point of flying business. A meaty breakfast and undrinkable coffee were served over the volcanoes of Kamchatka the following morning, before touching down in Petropavlovsk. Definitely an underwhelming experience, next time I will try to ensure I fly with Aeroflot proper rather than one of its subsidiaries, but overall I got what I paid for.
5/10

"nothing outside of the ordinary"

✅ Verified Review | I took a trip on Aeroflot from Moscow to St. Petersburg operated by Rossiya Airlines. I booked the flight late, so I paid a considerable premium on the ticket. That said, it was cheaper than the roundtrip ticket on the Sapsan high-speed train from Moscow to Peter. As expected for a holiday weekend, the flight was at or near capacity. The A319 had more leg room than my last flight on the A319 I flew with S7 airlines, but not much more. Boarding is not by zones, or by class it seems in Russia. It is whoever gets in line first, and a bit chaotic. The line typically forms quickly before boarding, and it is better to be early in line. Basic economy traveling is cheap within Russia, but like airlines worldwide the charges add up with luggage, etc. So everyone tries to just bring carry-on bags. Therefore, if you have carry-on luggage, you need to get in the line early or you might not find any overhead storage space. The flight is relatively short, about 1.5 hours, so you can tolerate a little discomfort. The flight attendents were professional, but not friendly. Once airborne, they hastily served a small, rather tasteless snack and choice of water, tea or coffee - no juice or alcoholic beverages. The temperature in the cabin was very warm - an experience that I have had on every flight I have taken inside of Russia. Russians tend to like it warm, but this was a bit too warm. On the return flight to Moscow, we sat in a holding pattern above Vnukovo airport for about 45 minutes and ended up reaching the gate 35 minutes late. No reason given by the pilot when he informed us of the delay, but delays sometimes happen because Vnukovo-2 is used for flights of high-ranking government officials. Overall, since I booked the tickets late it was an expensive flight, so value for the money might be skewed to the negative. However, that was my fault. That said, the flight was nothing outside of the ordinary. 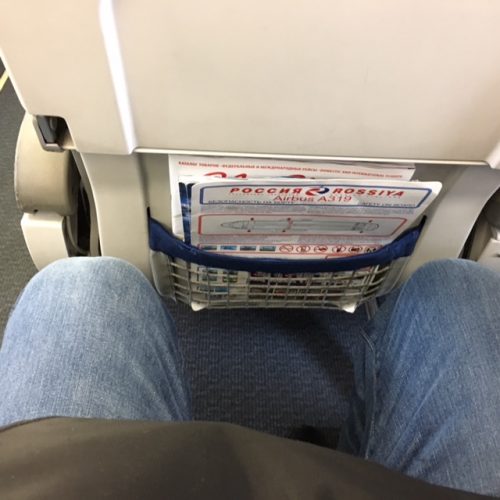 I flew Rossiya Airlines from Tel Aviv to Yekaterinburg via Saint Petersburg in January. Both flights were on ancient A319's. No IFE of any sort. Flying from TLV-LED is 5 hours, and very long without any IFE. Bring a book. Crew very mature, probably ex Aeroflot, but very kind and attentive and you can tell they are serious about their job. English is hardly spoken, one girl could not even answer a simpe question of "how long is the flight" and called another girl to assist me. Food was very basic but no complaints. I sat in an Emergecy exit which was very nice, lots of leg room. I had the same seat assigned for LED-SVX, but for some reason at boarding it was changed for a regular aisle seat with no explanation or apology. Needless to say I was upset, and demanded answers from the head Stewardess, who could clearly see that my old seat was crossed out with a pen, and my original seat, 9C, was not honored. She tried to convince me in poor English to take a middle seat in the Exit row. I was not happy about it, but realized I lost the battle. A few minutes later the same head Stewardess offered me an aisle seat with the one next to me empty. It was a nice gesture, and proved that she cared about my complaint. That's rare these days in the airline industry. Catering was very poor, a tiny sandwich with drinks. Nevertheless,they brought me safe and sound to SVX.
3/10

I used Rossiya around 30-35 times within last 12 months due to frequent trips to St Petersburg where Rossiya has its home base. Some good things happened due to integration of Rossiya and Aeroflot ground handing. Aeroflot is a quite civilized business so they taught Rossiya check in staff how to organize check in and how to politely serve customers. Ticket office services even despite coming to Aeroflot brand remain slow and helpless with insufficient staffing. Online services have all migrated to aeroflot.ru so all work fine. For some reason Rossiya still maintains its own website (quite shabby though) but clicking to check in or ticket purchase will all lead to aeroflot.ru. Inflight experience is well deserved 2 star with every effort put not to allow it to become 3 star. Meal service is the worst in the air (inedible sandwich plus cup of tea/coffee that are better not to taste). Bring your own food and drink from the airport. Their aircraft are second hand A319 with median age about 20 years or same aged B767-300 where seat configuration is 2-4-2. Toilets are old type (non-vacuum) so some terrible smells have accumulated within their lifetime. Legroom is non-existent on every plane type so I always try to get seat in emergency row. Seat comfort is the worst part of travel with them. Unbearable and painful if you're on a long flight. The crews are old soviet style. Even younger ones miss normal modern communication skills. Their English is usually incomprehensible so I don't get how foreign passengers can get flight info or even being communicated with. But there is one strong reason why this company is 2 star not 1 star. They are always on time. Not a single flight I was on have been more than 5-7 minutes late. Never. So that's why they fairly deserve their strong 2 star rating.
8/10

I flew from MPX to LED. The plane took off and arrived on time. The airplane and the toilets were clean. There was no inflight entertainment. The crew were very present during the flight but with basic English skills. The seats were very small and a very reduced leg space. They served us excellent food. Very surprised of the quality for an excellent price.
na

PRG-LED SU6222 15/8/14. LED-PRG SU6221 20/8/14. Worst experience ever! Very used old and dirty aircraft old staff! No shop (you can't buy anything) food was just some awful sandwich (thrown away) no alcohol no sweets. Staff were unpleasant. Absolutely can't recommend I hope it was my last flight with this company.
11 to 20 of 45 Reviews