✅ Trip Verified | Terrible experience with Regent Air. I booked a round trip ticket from Singapore to Dhaka. The departing flight was delayed for 4 hours without any prior notice. The return flight was canceled without minimal effort to make an alternative arrangement. The staff are rude and abusive in attitude. No sign of apology in their faces despite creating so much inconvenience.
4/10

"have to throw out accessories"

✅ Trip Verified | Kolkata to Chattogram. Problem occurred at Boarding pass counter. Limit of my bags weight 35. It shows on boarding counter scale, but just 30 minutes ago I Traveled from Delhi to Kolkata by Air India. Ok though I agree with this. I have a hand bag of 05 kg. If the counter lady have gave me the opportunity for transferring some of my accessories to my hand bag then problem solved. Moreover do 3kg very much overweight? I have to throw out some accessories from my bag. After then I get my boarding pass. Very nice experience.
1/10

"Not taking another Regent flight"

✅ Trip Verified | My 11:45 am flight from Coxs Bazar to Dhaka got rescheduled twice at 2:30 pm. Then, I went to check with Regent boarding desk at 2:15 pm to know that the flight has completed boarding at Dhaka only. Which means the flight from CXB is not taking off before 3:30 or 4 pm. This made me look at Regent Airways customer reviews and holy shit the review page didn’t have a single good customer review! A strong indicator that Regent Airways Management doesn’t prioritize anything between their flight timing, customer service, and overall flying experience. Not taking another Regent flight again, and suggesting the same to my family and friends unless the service improves!
4/10

✅ Trip Verified | Unprofessional mannerless attitude. We flew from Dhaka to Cox's Bazar at new years eve. Due to govt. Election flight was delayed 1.5 hours. But they didn’t mention that before. After sitting on the aircraft we came to know about that. We were stuck into the flight for all that time. The ground staffs behaviour was nice and professional. But the cabin crew acted like they are also some guest passengers there. Even after asking for newspaper they didn’t even bother to manage one.
1/10

✅ Trip Verified | Dhaka to Singapore. They have the worst possible online support staff. Standard of food, cabin crew or cleaning in the aircraft were terrible. AC inside the aircraft did not work properly.
5/10

✅ Trip Verified | Cox's Bazar to Dhaka. The inbound flight was delayed by more than 1 hour due to dense fog at Dhaka which delayed the aircraft to come. The check in & luggage handling was quick & they made us board the plane as soon as the incoming passengers got of. The cabin crew need to improve their communication skills as they distributed mass snacks to the entire row of passengers & let the passengers of that row distribute snacks among themselves. It may be boring doing the same work again & again, but, still, a cabin crew can easily provide a sandwich to a passenger sitting beside the window in a single aisle aircraft. Good airlines do operate old aircraft, but, its the attitude of the cabin crew & on board product that make all the difference. I don't recommend Regent on international routes as there are so many other airlines operate out of Bangladesh with outstanding on board services like Qatar, Singapore etc.
7/10

✅ Trip Verified | Dhaka to Cox's Baza. Booked a discounted ticket more than a month ago. Didn't expect too much. Just on time departure & arrival. That's what I got. Boarding & luggage handling was smooth. Cabin crew wasn't exactly cordial, but professional enough. It was a 40min ride, but the captain was able to make it bumpy despite clear weather. Cheese sandwich & cake was good enough for a shorts haul flight like this, but as expected no IFE. Aircraft was manufactured in 2001, so common for local Bangladeshi carriers. But the seats were good pitch even for a Dutch national who flew alongside me & was well over 6'. Hope for a similar experience with Regent next time.
3/10

"It got hotter, and hotter"

✅ Trip Verified | As soon as I boarded the plane, it was hot. Air conditioner was not on. It got hotter, and hotter, and hotter inside the plane while all others after me boarded. That process took roughly about 40 minutes for everybody to board. Despite many people trying to cool themselves by fanning newspapers or whatever that were in their hands and requests to the crew to switch on the air conditioner, it was still not switched on. When, finally, the plane started moving, I thought the ac would now be switched on - bot no - they still would not switch it on. The plane spent 20 minutes taxiing on the tarmac before taking off. The air conditioners finally came on about 7 minutes into the flight, for a flight that only lasts 30 minutes. The same thing happened on the return, with no air conditioner on until well into the flight. This is utterly disgusting on the part of Regent Airways. I have flown on this airline before as well, and the same thing happened on those occasions as well. If Regent Airways are reading this, please increase your fares to cover the cost of fuel for keeping the ac on right from the time of boarding to keep passengers comfortable. This is obviously a cost cutting exercise in fuel costs - but this is really disgusting. I am pretty sure all those waving their newspapers and anything else to keep themselves cool would much prefer to pay a few more Taka extra for the ac to be kept on than the terrible experience they get whilst on board your flights.
3/10

it was so hot on board"

✅ Trip Verified | Kolkata to Dhaka. Yesterday we traveled with regent airways but it was so hot on board that it was unbelievable. On an airplane it is not clean and service is not good. We think next time we're not flying with Regent Airways. "our seats were not good"

✅ Trip Verified | Dhaka to Kolkata. We were kept waiting for 15 mins due to their software problems, even in the business class queue. At last, they checked us in under special service from another counter. The flight was delayed by 2.5hrs due to heavy fog that day. But for the business class ticket, we were given a good lounge with premium food and wi-fi. So wasn't much frustrated. We were chauffeured to our aircraft in a 2006 Toyota Axio. But we were a little disappointed as despite for paying for business class, our seats were not good. The galley's wall was in front of us, so we were deprived of a lot of leg room. But suddenly, a passenger fell ill as the plane taxied to the runway for take-off. So the plane had to go back to its initial position, drop off the sick passenger in an ambulance and then returned to the runway, resulting in another 40 min delay. At last, the plane took off. The food quality (snacks), was average. Was served a hot dog, shwarma, and cake. But the seat itself was comfortable beside Window. There was no infotainment system at all, let alone wi-fi. So was a bit disappointed. Landed at Kolkata after a short 30 min flight. 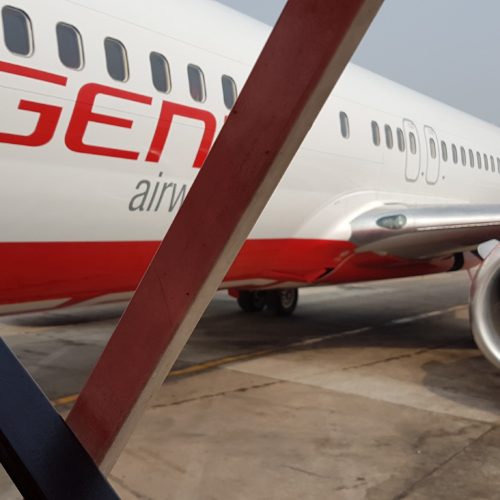 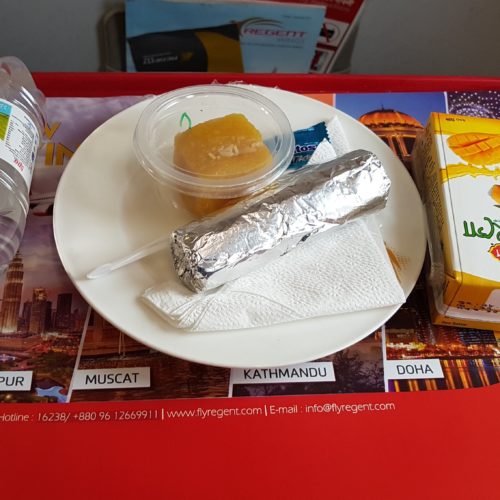