"the service was par excellence"

✅ Trip Verified | The Qatar airways experience was fantastic. The stewards / stewardesses were exceptional eg Aman from Doha to London & Aarti from London to Doha as well as the others (can't remember their names). The food was phenomenal and the service was par excellence. Already booked from Durban to Istanbul in Oct for my 40th wedding anniversary. No wonder they have been voted best airline numerous times. Nothing was too much of a problem for the stewards & meals were served only when required. No carts being pushed around. Also minimal noise. The Q suites were brilliant.
10/10

"rest of our journey stress free"

✅ Trip Verified | We encountered a problem with the booking of our tickets which was overlooked until just before we were to fly. Initially, BA worked with us on the checkin which was great but the Qatar Airways staff at the Boarding Gate and check-in at Heathrow (London to Doha) were most exceptional. They understood the situation (the booking was mistakenly done in my wife's maiden name which not her current passport)- although we also her maiden name passport when traveling as it has her visa in it. The pressure and stress of traveling was taken away in an instance and we ended up having the rest of our journey stress free. In addition, the Qatar Airways staff at the Doha Airport smoothed our journey even more. On both legs of our Qatar Airways flights our 2 young children were taken care of immediately upon boarding the plane.
1/10

✅ Trip Verified | London to Doha was delayed at Heathrow. Finally boarded the flight and sat there for more than an hour before being told there were issues with the plane. Later deplaned and told another plane was being prepared. As we were trying to leave, we got told to go back to our seats and that they might have fixed the issue. More time has passed and we were finally told it was going to take off. By the time we had left Heathrow, it was delayed 5 hours. This meant I had missed my connecting flight to Sydney. On the plane, the entertainment system at my seat didn't work. The touch screen failed and I had to move to the adjacent seat that was empty and use that screen. Food was okay, inflight service was good. Upon landing in Doha had my boarding pass taken from me and given a new one. I was not given any sort of compensation to use a lounge, got told to speak with the transfer desk. The flight from Doha to Perth which I was being redirected to was delayed by 2+ hours. When I got to Perth, to my shock horror, I was put on Jetstar Airways instead of a partner plane like Qantas. The Jetstar plane was also delayed by 2hrs. I was supposed to arrive in Sydney at 6pm on a Friday, I arrived instead at 8am on Saturday. I was only offered statutory compensation after I have still yet to receive. I not received a refund on the upgraded seats I paid for but was not able to use because of the delays.
6/10

"seat is taken by someone else"

✅ Trip Verified | I pre-booked the 16A for the seat for A350-900 with Qatar. I arrived counter in Rome and I was Informed the seat is taken by someone else and there’s no other seats available for the row of 16. The staff couldn’t solve my issues. I checked again with transit desk, none of them bother to look at my email but rather just telling me “sorry but all the extra legged seats are all reserved” Not to mentioned the supervisor kept saying “reserved is reserved”. That’s why I was trying to show the email to the staffs but they don’t care. I believe the confirmation email I received is valid to prove the seat is reserved for me. In this case, obviously it’s double-booked However, none of the we staff managed to solve my issue.
9/10

✅ Trip Verified | I had flight from Istanbul to Goa, but one day before flight company changed time of flight and in the end plane also was late and I lost my next two flights. I was at first in this kind of situation, didn't know how to get next flights and what's is with luggage. In this chaos between offices and departments in airport I lost my baggage tags. There were two suitcases. Qatar provided next flight, but with delay 20 hours which I spent in airport without any complaining and compensation. During my awaiting time they found just one of my suitcases and told me to fill application about lost luggage in final destination for second one and promised that it will be delivered during 2-3 days Any worries from my side I get used to trust people especially company with so high renting. I filled application for lost luggage after my arriving to Goa, but they didn't provide PIR code. More then 2 weeks they found nothing.
9/10

"this was best flight"

✅ Trip Verified | This is first time I have flown with Qatar Airways. I have friends who have flown with them several times and they have always rated them well. New planes, comfortable seats, good leg room (for a 6 foot tall person), entertainment system and screen excellent, and the food tasty and at the right portion size. Cabin was fabulous lit with light purples and blues. Crew were efficient and courteous. Took off on time arrived early at both Hamad International and Edinburgh. Having done various routes from SIN to EDI over the 17 years, must say this was best flight. 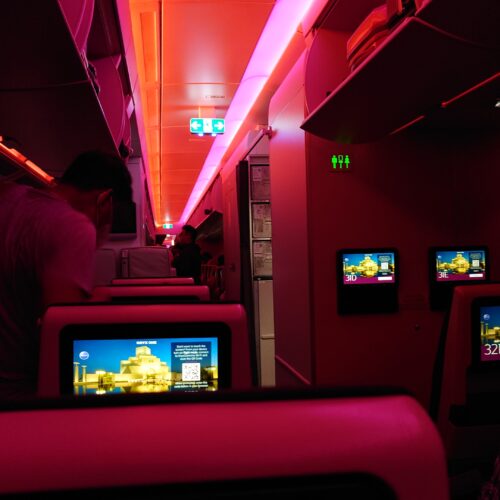 "gave us a ticket for 7 hours later"

✅ Trip Verified | I had a two-part flight from Paris to Doha and then Doha to Tehran. The flight from Paris had almost one and half hour delay for which we had no clear explanation. With this delay, I arrived at the boarding for the Doha-Tehran flight 10 minutes before departure time, but staff did not let us board and gave us a ticket for 7 hours later. So we have to wait more than 7 hours in Doha so we can take our second flight. No apology or compensation was offered (apart from a free meal) and the only thing we can do is to send emails to Qatar Airways and go through a probably long and tiring path to register our complaint.
1/10

"chosen for an Involuntary Downgrade"

✅ Trip Verified | I was chosen for an Involuntary Downgrade to Economy class from business class for Doha to Phuket flight on July 8 because J class was oversold. Today I received email that I will be reimbursed 125$.
2/10

"unable to get any reimbursement"

✅ Trip Verified | I missed my luggage at my final destination, Istanbul (SAW) airport due to my luggage mistakenly behind on the arrival date, 20 June 2022. The airline didn't manage to deliver my luggage until my return date, on 24 June 2022 and didn't contact or inform to me any update until I follow up or push them again and again. I was unable to get any reimbursement for my unexpected cost on buying extra clothing or expenses. My luggage was found at Istanbul (SAW) airport at the end due to their update but couldn't manage to send it back to my hand yet.
9/10

✅ Trip Verified | Fantastic experience with Economy class on Qatar SFO-MAA-SFO in June/July 2022. A350-1000 is one of the most modern planes in operation. The seats were very comfortable despite their thin appearance. There was no tailbone pain during the 15 hour trip from SFO to DOH. There was enough leg room in the first row after business class - Row 16. The best seats on this plane are 31A and 31K as there are no seats in front of them and you get a window too. The next best seats are 17C and 17H, those are aisle seats with no seats in front. Qatar' economy food was pretty good and sufficient. The AVML choices are offered in the standard menu so no need to order special meals. The quality of food was surprisingly good in all segments. Not too oily, spicy. Doha airport gets too crowded in the central area, which is the only downside in the whole trip. The service onboard was pretty good with the crew being quite responsive to your needs. Will not hesitate to fly Qatar again in future.
11 to 20 of 2020 Reviews