✅ Verified Review | Firstly the flight time was changed without notification and then the incoming aircraft was late. Then despite other aircraft's taking off, the captain was refusing to fly because of the weather. Then they said we could fly but only if there were 30 volunteers to take tomorrow's flight because the load was too heavy to fly. None of this was communicated by an official announcement. Communication was terrible. Eventually the plane departed 5 hours late. Because my connecting international flight was on 'final call' when we arrived the ground staff promised to send my luggage on to my next airline. I caught my flight just before the doors closed after running through the airport. Now my luggage is missing and I have heard nothing from Peruvian and they do not respond to my communications. Shockingly bad. 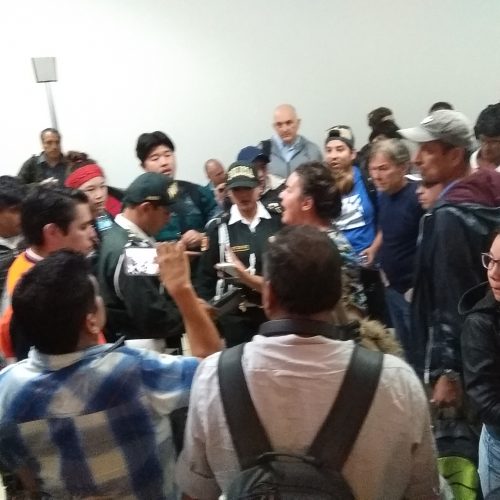 ❎ Unverified | La Paz to Lima via Cusco. My husband and I had the most unpleasant and terrible experience with Peruvian Airlines. We booked flight number P9 330 flying out from La Paz, Bolivia at 10.40 to Lima, Peru. We knew the plane would stop in Cusco for about half an hour. We each got one boarding pass and were told at the counter to collect our checked bags in Lima. Our seats were 21E and 21F, at the back of the plane. There were altogether 3 female flight attendants, one was more senior and was alright. The other two flight attendants (one younger, one older) were sitting at the back when the plane took off. We asked one flight attendant at the back (the older one) whether we need to leave the plane when arriving at Cusco. She spoke English, which was not even marginally understandable. She just replied, Cusco, and we could not understand other words that she was mumbling. When that same flight attendant served drinks, her attitude was like she did not want to work and serve customers. When I said "coffee with milk please", she replied "no milk" impatiently. When the plane touched down in Cusco, some passengers were still in their seats while others were picking their bags. My husband asked one flight attendant at the back (the younger one, not the one that served drinks) and said we were heading to Lima and "do we need to leave the plane?". That younger flight attendant told my husband to "remain seated". We therefore remained seated, thinking that other passengers were leaving because their destination was Cusco. Then, after a few minutes, the flight attendant (the older one, who served us drinks and had a bad attitude all along) came to us and said, in a very rude tone, "I told you to go out!". I asked if we need to bring our bags and she replied, without any patience, "take all your personal belongings!" Again, in a very rude way, like we were told off! For Christ's sake, we were the customers and I just cannot believe that this was the service that an airline would deliver! I was angry and told her that her attitude could be much better and this was very bad service. She just went back to her seat at the back. We left the plane, and there was a long queue at the immigration counter. No one told us we need to go through the immigration and customs in Cusco (as we only had a very short stop in Cusco and we're heading to Lima). If not because some very kind passengers allowed us to go through the immigration first, we would have missed our flight to Lima. As we only got one boarding pass at La Paz, after customs in Cusco, we did not know there was a new flight number and which departure gate was our flight. We had to ask around before queuing up to board the plane. When we arrived at Lima, we did not know the new flight number and had to guess before we collected our checked bags. Until then, we came to know the flight from Cusco to Lima was flight number P9 218. I am a frequent traveller but this was the first time that I travelled to Peru and Bolivia. It really struck me that the arrangements for such a short (half an hour) stop could be that bad, particularly when one flight attendant asked us to remain seated on the plane while another flight attendant rudely demanded us to go out! This is also the first time that I came across a flight attendant who is so impolite, rude and so bad-mannered. It is totally unacceptable. We are extremely disappointed by the services provided.
3/10

✅ Verified Review | I was deeply disappointed with Peruvian Airlines. So much so that If I can I'll avoid using them again in the future. My flights were Lima to Cusco return. On both occasions flights were delayed. Cusco - Lima over 4hrs. The communication regarding the delays was appalling. As a seasoned traveler I would have been pacified if I knew the real reason for the delays. Unfortunately the information was not forthcoming.
1/10

✅ Verified Review | Prior to our flight from Lima to Cusco, Peruvian Airlines switched the departure, which fortunately didn't cause an issue. Now, while in Cusco we received an e-mail telling us that the airline has pushed back our return trip back by 3 hours, meaning we will not make our connection back from Lima to the US. They have switched our itinerary 3 times now, which is not something I've experienced on any other airline. I'm currently trying to switch the flight to return on an earlier flight, so wish me luck! Also, the seats on the plane have the least leg room I've ever seen. It's a joke!
2/10

"aircraft was basic but clean"

Despite the numerous negative reviews, we were happy with our return flights on Peruvian from Lima to Iquitos. The first flight was on time and the return was delayed by around 1 hour due to late incoming aircraft, but the LAN flight departing Iquitos at the same time also had a short delay. Perhaps the delays experienced by others were specific to the Cusco route. Aircraft was basic but clean, with no inflight entertainment (to be expected on short routes), Peruvian does not have the newest airplanes, but the interior did not feel particularly dated. Service was fine, we were pleasantly surprised to be served food and drink on such a short flight. Baggage arrived on time. Tickets were somewhat cheaper than LAN or Avianca, because Peruvian (like Star Peru) does not impose a surcharge on foreign passengers.
1/10

"no explanations or apologies"

We flew Peruvian Airlines round trip from Lima to Cuzco. Both flights were over an hour late. LAN Chile flights on same routes at same times ran on time. Aircraft was over 30 years old. Staff and crew were completely lackadaisical about delays. No explanations or apologies were given. Running 1 to 2 hours late seemed to be standard operating procedure. Policies were inconsistent. No carry-ons allows on one flight with unlimited carry-ons on the next, in the same aircraft. There are several other carriers operating on this route. Take one of them.
2/10

"avoid this airline if you can"

✅ Verified Review | La Paz to Cuzco with Peruvian Airlines. The aircraft is 22 years old, everything worn and aged, from chairs to carpet, to window blind, to toilets. The seat was most cramped. One welcoming think is that they still serve drink and snacks even for an one hour flight. My flight was on time but I observed flights were cancelled frequently. For the daily LPB-CUZ route, I found 3 out of 7 flights were cancelled. Avoid this airline if you can!
1/10

"how bad Peruvian Airlines were"

We (a couple in our sixties) had booked a return flight without knowing how bad Peruvian Airlines were. On the way from Lima to Cuzco we were bumped twice and left hanging at the airport with no food, changed gate twice, and eventually left 7 hours later. The excuse was 'weather' but approx 6 flights from even the smallest other airlines continued to fly - it was perfectly clear when we eventually landed and the locals said it was fine all day. So total lie by this airline. No service whatsoever. On our return journey arrived at airport 3 hours early only to find a line of approx 160 people (I did a head count) whose previous flight had been cancelled. Stood in line for over 1 hour with one junior at the desk, not one bag or check in was done. All staff abandoned desk and refused to talk to anybody at all. Crowd was angry and baying for blood. Found out our flight was also likely to be cancelled with no reason. I went to windows and noticed no planes from this pack of idiots anywhere so ran to LAN and bought two new tickets - yes, more expensive (plus I lost my other airfare) but perfect service. The lady from LAN told me it happens almost daily with Peruvian.
2/10

✅ Verified Review | We had a 6:00 am flight from Cusco to Lima delayed and then cancelled. We were very understanding and had to go get new tickets at the counter. We waited in a very large line that was completely chaotic. People were cutting, we told security guards and employees and they did nothing. It was so frustrating. Passengers began to fight due to the lack of order and lack of organization. People who cut spent an hour holding up the line. It was the worst flight experience I have ever been a part of, and it was all at the ticket counter. We tried to tell the manager and he wouldn't speak to us. We wrote a complaint and I was almost in tears.
21 to 30 of 43 Reviews