"lady at the desk said we were late"

✅ Trip Verified | Istanbul to Stansted. I wouldn't fly with Pegasus Airlines ever again. £200 less than BA but I was made to book another flight because we were 4 mins late before the gate closed. We had our daughter with us who is 17 months. We had already done online checkin! All we had to do was drop our bags off. The lady at the desk said we were late. I asked to speak to the Manager. No one came and at this point I knew i had to pay for another flight so I said just get me on another flight as we were only away for 4 days. i had to pay £379.20 on the spot. Didn't accept Credit card. Customer service was shocking!
1/10

✅ Trip Verified | Istanbul to Kuwait. I had arrived the airport 2 hours and half before the flight and though we could not make it to the plane. I was surprised when first arrived pegasus counters to discover the all flights are served together, no matter when and where the flights go. No employee to arrange the crowd, everybody was just waiting his turn. Finally we got our boarding pass and to find out 45 minutes left to fly . Even the direction signs were not clear to differentiate domestic from international passport control. Few minutes later I found myself standing in another long row. I had finished that stage and got the departure stamp on our passports to catch up the gate after 5 minutes behind schedule, but the plane and the shuttle bus were still avail. I could not get in. then I went to Pegasus office and they let me and my family go into Turkey again to stay for any upcoming flight and stay in any hotel on my charge. Worst travel experience for a family ever. Never try this low cost company.
1/10

✅ Trip Verified | Dubai to Istanbul. Worse company ever! At check in, extra luggages I booked and paid for weren't updated in system so we had to wait 30 min with big queue behind us. Despite I have bill and invoices. We board in and stayed 2 hours on the ground without explanation, staff emptied the plane and we don't know what to expect. We lost our connection, train and hotel booking because of them. Staff very rude and shouting at customers, unable to handle the situation. Service customers denied to reply to me. Never again!
1/10

✅ Trip Verified | Istanbul to Ras Al Khaimah. Never chose this company! Pay more, but don't believe in Pegasus! They cancel my flight, didn't send any email to advise and gave no refund or compensation. Totally shameful. Beside all that the treatment in the airport was completely disrespectful.
10/10

"made our trip so much fun"

Not Verified | Me and my friend have to say that our trip from Antalya to Stockholm 21 of October 2019 was perfect! I traveled also with my dog in the cabin. The staff was excellent. A special thank you I have to give to Bugra, you made our trip so much fun and unforgettable. We looking forward to fly again with Pegasus. ✅ Trip Verified | Istanbul to Ankara. Very capable, smiling, helpful, diligent cabin crew. Seat pitch was very good, although seating was not very comfy. I was alone on a three-seat row. Although take-off was a bit delayed, the flight landed on-time. Pre-bought sandwich was pretty good, prices for drinks are reasonable, thumbs up for alcohol on a domestic short-haul and all these on a low-cost experience. Quite unexpected and pleasant surprise for anyone who has seen European low-cost flights.
2/10

"it was good experience"

✅ Trip Verified | Gazipasa to Istanbul. Let me began with this, if you are looking for cheap flight which is less than one and half hours, Pegasus is good option. However, you should take this for you consideration that, your seat is not going to be recline and you would probably left the aircraft thirsty after you flight. On the other hand, briefing in their flight is masterpiece. Pilot briefed passengers 15 minutes before landing which is weird for me. All in all, it was good experience to flew with them, but I prefer not to fly with them anymore. 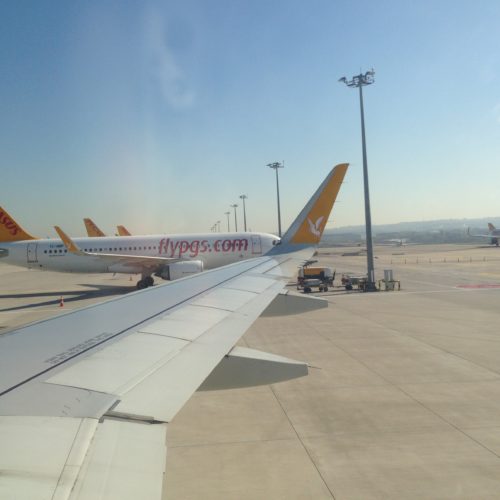 ✅ Trip Verified | Istanbul to Athens. We had 2 different PNRS and they took all of the luggages under 1 PNR (which obviously means the 2nd one didnt have any registered luggage) and charged us 105€ extra without explaining the situation. They never fixed their mistake but just threatened to cancel the flight unless we paid. The funny thing is how it was shown in the system what happened and Pegasus Athens was supposedly taking care of it while their call center - to which we were emailing in Turkish - literally mailed that we exceeded the luggage allowance and that they never give wrong information. And that their supervisor said there were no extra people there that is why they added all the luggage under 1 PNR. Which was a lie because the people from the 2nd PNR were called to give their luggage and my mother was asking for their own group's luggage stickers which they never got because they had to wait for them to make the mistake of adding all of them in one PNR . So my mom received 8 stickers for luggage and paid 105€. Their way of handling these situations by literally calling you crazy and saying how the supervisors report matters more - and that you should use your legal rights- it's just frustrating.
1/10

"overcharged me for luggage"

✅ Trip Verified | I was very disappointed with the flight and staff who overcharged me for luggage. I paid for extra luggage through the app but I was told the 40 kg that I paid extra for was free and included within my ticket price and my son had no allowance dispite paying full adult rates. In had the police called on me at the airport when I tried to stand my ground but fortunately the policeman was very good and took my side. The staff wasted over 2 and a half hour of our time and the only way we could get on the plane was to pay extra. After writing to Pegasus they now say they have investigated but have all the facts wrong and have refused to refund the extra charges. They have unfortunately ruined our holiday at the last and left us so disheartened that we will definitely not be travelling with them again.
1/10

"They claimed we used violence"

✅ Trip Verified | Tel Aviv to Stansted via Istanbul. The flight from TLV-SAW-STN was good. As one would expect from low cost company. The service on the airplane was except from the fact you will not receive a cap of water for free and bring water on board in not allowed. We got our pre-ordered food and it was very good. On our way back to TLV, in SAW, in the gate after the boarding tickets scanned and right before we stepped in the sleeve to the airplane, we were stopped. Our bags were re-weighted and we were asked to pay $160 for over weight. We refused to pay saying all our bags were weigted in London. The team on the gate was very aggressive. They took our bags by force demanded our passports and boarding tickets and told us they will call the police (which they didn't). We still insisted not to pay they told us we are too dangerous to go on the airplane and that they cancel the flight for us. We told them we have a check - in bag on the airplane, they told us it will be removed (and he was not removed). After we went to seek for help in Pegasus offices in the airport, in the tickets office and in the check in desks supervisor, a lady appeared from the crew in the gate and talked with officer in front of us. After that they told us sorry we can't help you. They claimed we used violence that we didn't and that we are too dangerous. I was traveling with my family, 2 adults and 3 kids ages 11, 9 and 5. Eventually we purchased new tickets and arrived TLV 14 hours later then we should have. We spent the night in the airport with our kids. I will never fly again with Pegasus Airlines. It looks like the team in the gate was not part of the regular gate team but an ad-hoc team that after finished with us went on to other gate doing the same thing. Stopping passengers in the gate after scanning their boarding tickets, on their way to the airplane and weighting their bags with biased scale in order to take more money from them.
11 to 20 of 325 Reviews