"is in need of an overhaul"

✅ Trip Verified | Hong Kong to Ulaanbaatar. MIAT Mongolian Airlines is unfortunately a very rudimentary airline which is in need of an overhaul. They operate aged a fleet of 737 aircraft with a single 767 in their fleet, the interiors of the aircraft are dated and worn and illuminated with ancient yellow lighting. Legroom was less than desirable for a full-service flight and everything felt like it was still in the 1990s. Of course, don't expect any Personal IFE, thats not going to happen. The flight attendants were alright but not outstanding, and so was the food. I recall there was a queue of around 12-15 people for the washrooms after meal service, and this is not an exaggeration. It is one of the only airlines that connect the world to Mongolia, hence we weren't left with much of a choice. It's bearable, but requires a major overhaul to be on the world stage. 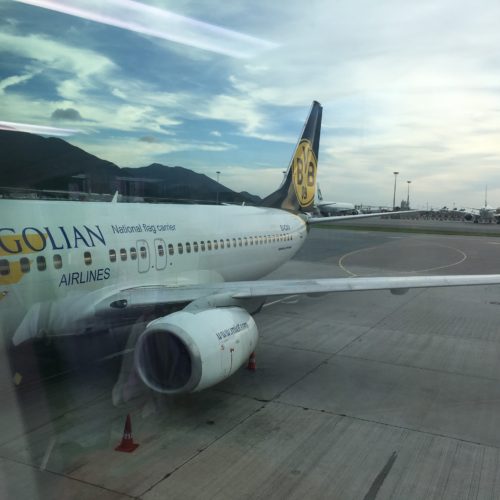 ✅ Trip Verified | Beijing to Ulaanbaatar. MIAT Mongolian is not ideal. I’m a MIAT Mongolian Frequent flying during 2014-2015 due to family vacations. Their customer service nor landings are good. Meals are okay but if you’re trying to get to Moscow use Aeroflot or a better airline. They don’t use inflight entertainment.
7/10

"ok but not worth raving about"

✅ Trip Verified | MIAT Mongolian Airlines from Berlin via Moscow Sheremetyevo to Ulaanbaatar. Well over 2h queuing in TXL, despite web check-in! There was no separate line for baggage drop. Long lines at the entrance to the hopelessly overcrowded departure lounge at the gate let to a delayed start. Further nuisance in Moscow where pax were forced to leave the plane for passport control, only to return into the same plane thereafter. Not sure if the above is under MIAT control. The actual flight was reasonably pleasant. The ageing 767, seemingly well looked after, was filled to the last seat. Crew was efficient but not overly friendly or extra hospitable. The IFE was functional but the film selection rather limited and headset quality poor. The seats were tight but not uncomfortable. I found the food surprisingly decent and the drinks (Austrian wine and Mongolian beer) actually very good. The crew offered soft drinks very frequently, which I consider important on a 10h-journey. Immigration in ULN was swift and friendly and put TXL to shame. Return was direct from ULN to FRA (9h), again on a full 767 with similar onboard experience. Overall, I found the journey with MIAT quite ok but not worth raving about.
1/10

"quality of flight is very bad"

✅ Trip Verified | Hong Kong to Ulannbator. Overall quality of flight is very bad upon Value to money. Firstly, business class seat has no entertainment at all. Nothing. Secondly, the seat was almost not able to recline. And Front to back space is still tight. Thirdly, food was just okay if it is economy class, but for business class it was actually not good. The toilet was horrible and not clean and toilet seat is always can't hold straight up.
1/10

✅ Trip Verified | Tokyo Narita to Ulaanbaatar. They used to have 162 seats on an already uncomfortable flight; now they have 174 seats on what is the most miserable flying experience ever. No entertainment of any variety on this flight from Japan to UB, so bring a book. It's too tight to sleep. Babies crying, people cursing (can't blame them, really) - it's a punishment flight. Do not eat the breakfast burrito on the return flight from UB to Narita, even the Mongolians will tell you it will keep you in the bathroom. No way to upgrade to Economy plus. Plus they have cut back on the weight of carry-on, so make sure you're either super light or have a suitcase that you're checking. No WiFi connection, and there are no Miat staff at Narita until just before departure, so if you have questions or problems, you're out of luck.
1/10

✅ Trip Verified | I missed my flight to Ulaanbaatar, Mongolia from Beijing at 1:40am in the morning, as I arrived and there were no staff from MIAT airlines to help with check-in, or direct me to get onto the next flight or get reimbursed for the flight. Not one person was there. I went to the attending airport customer service to ask for help and they called MIAT airlines 3 times (2 times before flight and one time after), to which on the third time, they called, MIAT airlines picked up talked with the attendee and when attendee asked them if they could talk to me, they refused, while I was standing there listening in. Beyond being enraged at not getting to talk to MIAT personnel at all, I later was able to get in contact with the Manager of MIAT Airlines in Beijing, to which he threatened to sue me if I wrote a bad review. That is quite ridiculous. I had only asked MIAT Airlines to send a written documentation to the third party Feixu platform on Alipay that I had bought the ticket on to help me get reimbursement of 500rmb for the ticket, a ticket I bought for 2700rmb and they refused. In this case, as they are the airline, I don't believe they lose any money. It would be just be providing documentation to get the third party to reimburse me the 500rmb. I complained to them about their service personnel being intentionally unavailable to talk post missing the flight. Poor service on top of added injury to passengers. I definitely recommend this airline or their staff. I am appalled at the way I was treated by a Manager.
7/10

✅ Verified Review | My return trip with MIAT Mongolian Airlines (four-hours each way) was generally smooth apart from the minor technical issue on the first leg from Ulaanbaatar to Hong Kong. Shortly after leaving the gate, while taxiing to the runway in preparation for take-off,the captain made an announcement that one of the engine stopped working and we would have to return to the gate. We disembarked the aircraft and had to wait for another two hours at the departure terminal before we got told that the flight was ready for boarding again. The ground staff were very disorganized, especially when it came to re-issuing everyone on the flight with a new ticket, but the flight attendants were very professional. I appreciated the apology announcement for the delay both prior to take-off and after landing. The return flight was hassle-free. As for the food, I found it on par with most other airlines. IFE was limited to a single movie which was shown on a shared screen.
9/10

"the seats are fairly wide"

✅ Verified Review | My return trip from Ulaanbaatar to Seoul Incheon was relatively uneventful. Check-in was smooth and my 2 pieces of hand-luggage was not weighed on either of the legs to check that is was under the limit. The aircraft was very dated and there was no IFE for the entire duration of the flight (4 hours). However, I was more then content with using my one music player. The seats are fairly wide, with a 2-3-2 seat layout in economy. Service on the flight was on par with other airlines and hot meals were served on both legs. The flight arrival time of 12:50pm lines up well with connecting flights out of Seoul Incheon.
9/10

MIAT Mongolian from Ulaanbaatar to Seoul on Boeing 767. On time departure and arrival on this three hours flight. Cabin clean. Good seat. Breakfast good. Excellent staff service both on ground and during the flight. Fantastic scenery to watch during take-off out of Ulaanbaatar. Overall just a smooth, enjoyable experience.
5/10

Flight was delayed for few hours. And my luggage wasn't even on the flight. I arrived in Mongolia on Sunday morning and was told to come on Tuesday morning for my luggage. When I went to the airport on Tuesday I was told that my luggage will arrive on Thursday. Completely ruined my holiday and was a total waste of time and money.
1 to 10 of 33 Reviews