"this is a really responsive airline"

✅ Trip Verified | We have actually not yet flown. Our flight was due to go in July 2020. I was trying to get a voucher because of COVID19 through the booking agent (mytrip.com) with no success so finally contacted Malaysia Airlines direct. The representative was very helpful, no problem that we had booked through an agent, and processed the voucher request immediately. I had it in my inbox within 3 hours of the phone call. And, to my surprise, we were awarded a credit 20% higher in value than the original booking. Now, this is a really responsive airline! First, I did not have to wait until the flight was due to depart in order to get the voucher, and they have been very flexible and generous in their response! Well done Malaysia Airlines.
1/10

✅ Trip Verified | Malaysia Airlines cancelled my flight and put me on a flight the next day. They sent me an email. No questions, if the flight on the next day is good for me, nothing at all, you fly the next day. So I wrote to them an email to avoid significant roaming charges. In my first email I asked if they are going to provide any accommodation or any kind of compensation because i booked a hotel in my destination and now I was going to lose a night I paid for plus i needed another hotel in Kuala lumpur. They replied they are not going to provide anything. No customer care, no intentions of help or even replying to your email. I lost 200 euros, because it was for 2 persons. Anyway, I left it at that now, but just wanted to warn other travellers.
1/10

✅ Trip Verified | On 24th of march I booked a ticket from Penang to Kuala Lumpur for my wife. After trying to get news from them unanswered, since it was possible I decided to book online. After one minute flight was canceled but money not returned, as they want to convert it in credit or use before end of the year. Why sell tickets and then immediately cancel? Why you don't refund immediately?
8/10

✅ Trip Verified | Singapore to Kuala Lumpur. The staff was friendly, the seats were comfortable, although the flight was not full. It is significant for a short-haul flight that the aircraft was provided with entertainment. Food and service were fine for a such short flight. Boarding was good with friendly and welcoming crew.
1/10

✅ Trip Verified | Both my son and i booked tickets to fly out from Kuala Lumpur on the 18/3/2020 at 2235 via MH135 and expected time of arrival in Brisbane at 8.40am on Thursday. When we arrived at the terminal, we checked in via the kiosk, only our luggage tags were printed. we were told to go to the ticketing counter to get the boarding passes. Upon reaching the counter, staff informed us that passengers with Malaysian passports weren't allowed to fly out and therefore she won't be able to print out the boarding pass for us. Unhappy with what she said , i proceded to call Immigration Malaysia on 03 87763681 stationed in KLIA, I spoke to an officer who said since we are permanent residents and with long term visa, we should be able to fly out. Taking his word I approached staff again to inform her of what was told to me. She wasn't happy with what I did, so she insisted on taking all our documents over to the Immigration Malaysia herself. According to her, she went over to counter 23 of immigration and consulted an officer stationed there, who according also confirmed that we could not fly as our documents were insufficient and we didn't have the PR Card. The documents that we had on us was issued by Immigration Australia with their logo and crest of the federal government on it, In spite of that, she still insists that that paperwork was insufficient and again insisted on the PR Card. I informed her that we were just granted our visas, and told her that we weren't going to Australia for a holiday but to return home. Staff again took matters into her hands and even went to the extend of calling up Australian Immigration to confirm the authenticity of the documents and of our claims of being residents. In spite of getting the confirmation from the Australian Immigration, she insisted that she won't be able to issue the boarding pass and refused to put in a word to Immigration Malaysia to confirm that we could fly out. The third time I called the Immigration Malaysia number, this time this officer said that we could not fly out. I told her that i have already checked in and that the kiosk printed out my luggage tags, to which she said we still can't fly out, so i explained to her that that action of checking in needed to be undone but she just brushed it off and told us to go to counter 3. After 4 and the half hours or so of dealing with this woman and the contradicting feedbacks from the immigration officers, we headed to counter 3 for a refund. An young man with a Hospitality T-shirt approched us and saw the visa grants that i was holding and he called out to another lady to help us out, This Good Samaritan refused to give up but insisted on dragging us back to see staff. This good Samaritan helped us by approaching the Immigration Malaysia and managed to get their approval. They went on to MH office to get our boarding passes. When we checked in, staff left a "not allowed to travel" in the system and left w/out undoing her mistake.
1/10

"spoiled by one crew member"

✅ Trip Verified | Kuala Lumpur to Colombo. It was all good except that the entire experience was spoiled by one crew member. The male crew member who was extremely rude and for sure doesn't give a damn to the customer experience or satisfaction. When I requested for a vegetarian option, his answer was "we dont have vegetarian option, you should have informed your travel agent, take either chicken or fish". I asked him is there anything you can assist me with, came the reply no.
10/10

"I would highly recommend"

✅ Trip Verified | Kuala Lumpur to Sydney return. Good flight over and great flight back. Malaysia Airlines economy product is almost always good. Though it does depend on the crew. On these two flights the crew were excellent, especially the return sector. Above and beyond in friendliness and "can do" attitude to requests. Looking great in their uniforms. Food was good. The main meal always feels a bit small for me. And one was served just a degree or two above cold but the flight attendant got me a warmer one off another trolley. MAS take note - we westerners do not like hot food served any other way but piping hot. Especially during covid19 concerns. The snacks served at the end of the journeys were excellent and hot. Greatly improved from previous journeys. Nice touch is crew walking the aisles with a tray full of beers on departure from Sydney. Since the passengers are Australians or Indians, its greatly appreciated. Dont expect it on departure from KL. IFE quite good. Seats getting on in years but Ok. Cabin colours very pleasant. Both flights ontime or early. Often offering very reasonable fares for the quality of the product, I would highly recommend.
8/10

✅ Trip Verified | Singapore to Kuala Lumpur, Great check-in Time. So helpful check-in Counter staff. The flight is smooth, on-time. The flight attendant is nice. The inflight meal is cake (pandan) and peanut. The pandan cake is delicious, I like it.
1/10

"no level of compassion shown"

✅ Trip Verified | Mumbai to Melbourne via Kuala Lumpur. My husband passed away on our trip to India and as we both had a return ticket from India to Australia, I requested for his ticket to be changed to my daughter’s name so she could accompany me back home. From Malaysia Airlines, there was no level of compassion shown - I was not asking for a free ticket. I was ready to pay for the penalty on the name change but under no circumstances did they consider my request; they neither cancelled my late husband’s ticket and at a time of loss, with the stress of the funeral arrangements, my family had to stress about getting a new ticket for my daughter to travel back with me. A death in the family is a deeply distraught moment in a persons life - some level of compassion goes a long way in showing support and assistance, this process with the airline has made me rethink of ever using them.
8/10

"service from the crew was excellent"

Not Verified | Brisbane to Kuala Lumpur. Warm greetings from cabin crew upon boarding the plane. Service was fine. Cabin crew interacted with me in a professional manner. Meal service started with the Malaysian Satays, which was excellent. The main course, a chicken dish was not the best. The flat bed was comfortable enough to allow me a few hours of sleep. The IFE has a limited selection of movies, needs a much wider selection. No amenity kit was provided for a 8 hour flight, a bit disappointing. The service from the crew was excellent. 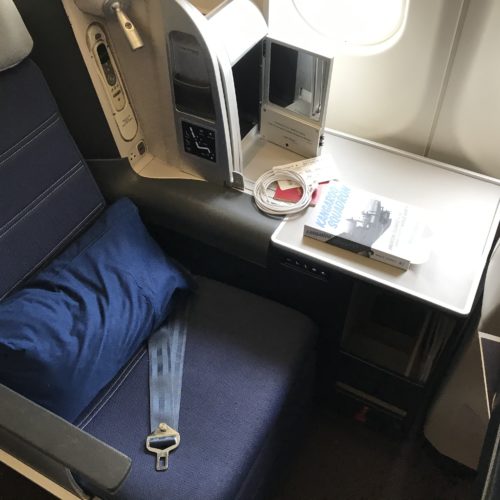