✅ Trip Verified | I’ve flown with them three times in the last year and each time they’ve managed to have a baggage delay. The app and website are slow and unreliable and simple things like changing seats require calling their phone center. Business class has old uncomfortable seats, no power outlets, and no wifi.
7/10

✅ Trip Verified | Crew are great, not over the top, they just get the balance right. What lets them down are the dreadful business class seats. Seriously LH this is 2022, 4 across on the upper deck is no longer acceptable. Wine list made up for the dreadful seats.
4/10

"rude and arrogant to me"

✅ Trip Verified | The cabin crew staff were rude and arrogant to me. If you are sleeping, then you won't get water or food even if you ask multiple times. I pressed the button and was waiting for 20 mins for a glass of water. I have traveled a lot but the experience with Lufthansa is painful. I don't think they really have any concerns and if customer experience really matters to them.
1/10

"Will not fly Lufthansa again"

Not Verified | Horrible experience. Delays. Lost luggage. Rude steward. No carry on baggage compartments due to stuffed jackets from others. When asked for compartment help the steward replied too bad. Very bad attitude. Will not fly Lufthansa again
1/10

"I was horrified by the experience"

✅ Trip Verified | I felt compelled to write this, even though nothing I am going to describe in my recent travel experience hasn't already been written by others. The only thing I can add is that I am shocked that the Department of Transport in the U.S. and the FAA continue to allow Lufthansa to operate with impunity. I have flown Lufthansa for decades, (because I primarily fly on United, and being the Star Alliance partner, inevitably I would be on Lufthansa in the European portion). This month was the first time I traveled outside of the U.S. since the pandemic. I had heard that Lufthansa has completely fallen off the cliff in terms of service, reliability and even general operational adequacy, but I thought, a short 2 hr flight RT between Frankfurt and Madrid, how bad can that get? Their seats booking system is broken, and while we had paid for premium seats over and over again (and promised previous overcharged payments would be refunded, I don't expect to see that refund), we essentially had no premium seat assignments up to the day of departure. Their ground crew was rude and hostile, (e.g. just did not answer my questions, rolled their eyes and smirked with agents next to them, etc.), and the flight crew basically was not present throughout the flight. No service whatsoever on the flight (no snacks, no drinks, I didn't know this is a discount budget airline?). Mobile boarding pass could not be issued at time of check in, I had to line up at airport, at which point, the agent harassed me by insisting on weighing my carryon (they did not insist on doing that for my husband who is White), and said my carryon was 1 kg over, so I had to check it. At least, my luggage did not get lost. I was horrified by the experience. I sent many letters of complaints to the company, I do not expect anyone to respond or compensate.
8/10

Not Verified | The flight experience was very good, far better than expected. Crew friendly, flight on time, food okay if not a little poor, self service of drinks in the galley, movie selection/ entertainment system good: a smooth flight, on par with ANA, which I had flow on the leg Frankfurt-Haneda.
1/10

"Avoid Lufthansa at any cost"

✅ Trip Verified | We use to love Lufthansa but now it has become the worst airline both on-board and with the worst customer service. No one is ever there to address issues, if they are there they are rude. You can’t talk to a live support. No response to email inquiries. They owe me 250 euros but have not yet reimbursed me. Flight cancellations, delays are very common with no explanation or support. Terrible food on board on international flights. Avoid Lufthansa at any cost.
1/10

"won't send me the money they owe me"

✅ Trip Verified | They won't send me the money they owe me for something that was their fault. In June 2022 their flight from Bologna to Munich was late and caused me to miss the connection to Toronto. I waited in line for 5 hours and was told they ran out of vouchers and would happily reimburse my overnight expenses which amounted to about $300. I'm a college student and could barely afford to cover that, so I've really needed my money back. But after I went through the email-only customer service process, after 2 months the rep asked for my bank information to send me the money - I responded promptly - and never got the money, almost 4 months later. I sent multiple follow up emails and nobody will respond. There's basically no way to contact them otherwise. 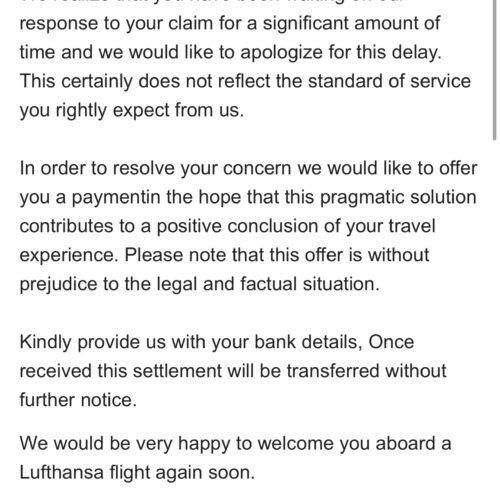 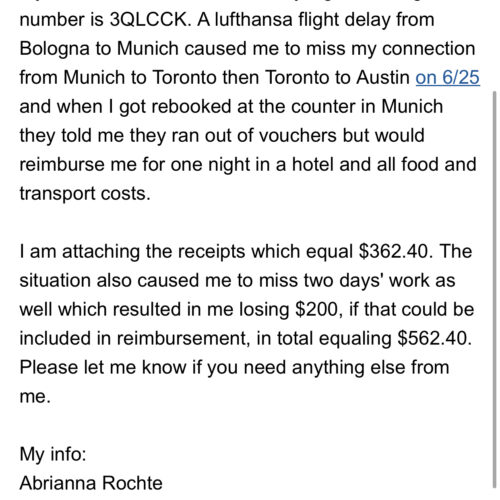 "all in all a good experience"

✅ Trip Verified | Nice Flight on time in Business through a mileage upgrade. Cabin crew very nice and attending. Food was quite decent three course Menu and breakfast even though the flight was a late night one. Seats are a bit dated. Yes it’s a full flat bed but seat had some male function and needed to be reset. Also the head part is annoying when sleeping. But all in all a good experience. 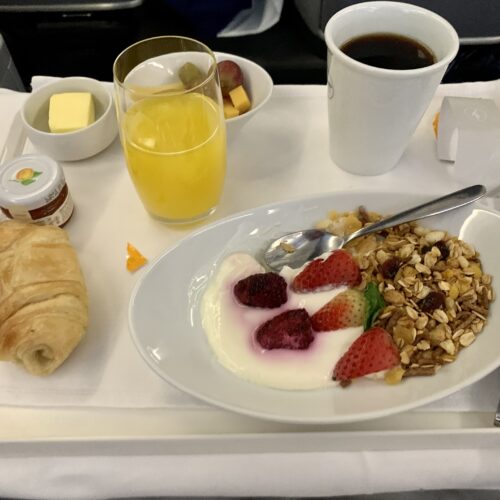 Not Verified | You get what you pay for. Lufthansa crew are always on point, if a little dull, but the business class product is embarrassing. Chaos at the gates, nasty ground staff, no sense of feeling like this could be a fun trip. The food onboard is poor with a single selection, no charging points, no amenities, no pillow or blanket on a late night flight, no entertainment, no recognition of Miles and More status. Just sub-par on every count except price. Well done for making a cheap product feel really cheap.
1 to 10 of 2112 Reviews