"I do not recommend this airline"

Not Verified | I flew out of Copenhagen (CPH) to get back to Toronto on June 23rd, Thursday. My connecting flight was delayed, which happens. I arrived in Warsaw from CPH, and because of a tight connection my baggage did not make it to Toronto. There was another flight arriving 2 hours later to Toronto, so I wasn't too worried about my baggage, especially that I flew business class. But, long story short, my baggage did not arrive, has not arrived, and I have had no news, and no way of contacting anyone. They only provide you with a fax number to connect for lost baggage! When you look up lost luggage, there is a website where you enter your lost luggage reference number, but it just says "still tracing". I know there are staff shortages, but this lack of communication is unacceptable. It has been 5days, and no word! I don't think I will ever fly LOT again. I do not recommend this airline to anyone after my experience.
1/10

✅ Trip Verified | Absolutely horrible service, cabin crew doesn’t speak English, they are rude and not friendly especially if you ask them to speak in English. Very uncomfortable seats, dirty cabin, average food and no wifi at all, not even an option to pay for it, it doesn’t exist! When I asked if my connected flight was waiting because the original flight was delayed, they were rude and not helpful at all! Entertainment below average, earphones that are not working, usb plug can’t be used to charge your phone, no power coming out of it. Blankets and pillows smell bad and don’t look clean at all even though they were packed in a bag. Absolutely horrible! I would never use their services again!
1/10

"not received my ticket money back"

✅ Trip Verified | Back in December 2021 my flight with LOT was cancelled. Until this day (June 2022) I have not received my ticket money back, not even mentioning the compensation. Moreover they refuse to give me my money back for service that was not provided. I definitely do not recommend LOT, worst experience ever!
1/10

Not Verified | Tel Aviv to Warsaw. We used service of LOT twice and never will do this mistake again. Lowest loyalty to the customer, chasing for money that’s all. Please safe your money. Finally you will pay more and stay with disappointing memories.
1/10

"crew were distracted and disrespectful"

Not Verified | Absolutely horrible service. Flights were delayed on multiple occasions. Check in took in excess of an hour due to staff disorganization. Airline crew were distracted and disrespectful. Possibly the worst flight and airline I have ever been on.
7/10

"could be better, but it's not that bad"

Not Verified | Checking in for the Budapest - Warszawa flight at Budapest Airport was really slow. Then we departed with almost 30min delay. So I had short time to catch the connecting plane to Vilnius. But the flight was pleasant, served some treats (apple buns) on both plane. At the Vilnius Airport I realized, my luggage was missing, at the luggage office they told me, it was on the next plane. Waiting a few hours doesn't hurt me that much. On my way back from Vilnius to Budapest went everything good. Overall, LOT could be better, but it's not that bad.
1/10

"it charged me for the seats?"

Not Verified | I tried booking Economy class I went through all the steps and when I came to the seat selection it charged me for the seats? Few weeks ago they changed their policy from 2 check in bags to 1 check in bag. I picked my seats and when I was about to pay the website cancelled my selection and took me to the first page when I tried booking ticket again the price went up by mora than $300.
1/10

"wait for 6 hours at the airport"

✅ Trip Verified | After missing my flights because of repeated delays, today morning and having to wait for 6 hours at the airport, the next flight has been delayed for another 40 minutes! Can you even spell nightmare airlines ! 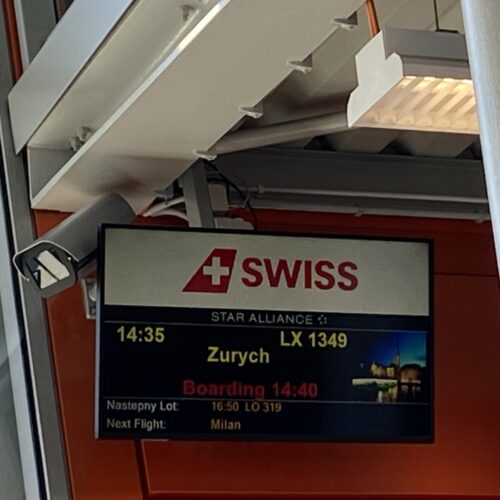 "First and last time with LOT"

✅ Trip Verified | A minimum of 30 minutes delay each time. No staff available at the gate at boarding time, no information about the delay. On the way back to Zurich, the flight was delayed 40 minutes! Took them another 10 minutes to open the aircraft gate and then transfer us with a bus to the transit gates. There was only 1 line for controlling the only 20 our luggage. I arrived on time and the gate was already closed. I had to change my flight and wait 6 hours at the airport. First and last time with LOT!
1/10

"I wouldn't trust them"

✅ Trip Verified | We checked into our flight Prague to Tallin with a layover in Warsaw. When we arrived to the airport in Prague, we had our tickets printed and saw that we were on standby from Warsaw to Tallin but had seats since early morning for Prague to Warsaw. We we're not okay with this because as it is, we would into Tallin at 11:30pm with a flight to NY at 7am the next morning but then to also be put on standby? When we asked the attendants at the check in, they told us that the flight was overbooked and that we'd have to wait to speak to the LOT transfer desk in Warsaw. While we weren't happy, it was our own fault (I guess; still unsure how we were able to check in fine for Prague to Warsaw but not the end destination from Warsaw) for not paying for selected seats. I called the customer support line to try to upgrade. There are no upgrades available that I have to see the LOT transfer desk in Warsaw. I try to ask the woman at the gate if we can upgrade as well on the off chance maybe the previous agent was wrong. She says no, so I asked if she could tell us how full the plane was, she tells us not full but close to full. This at least gave me hope, though I still didn't understand why we didn't have a seat assignment at check in if the plane wasn't full. But anyway, we get to Warsaw, I go to the transfer desk where there is a huge line and my boyfriend heads to the gate in case someone is there with a shorter line. He comes back because of course no one is at the gate yet, we wait in line at the transfer desk for 35 minutes only to be told that they can't help us. Only agents at the gate. By this point I'm so frustrated because we were told by two different people to go the transfer desk just to be turned away. We run to the gate to be told we have to wait for everyone to board before getting a seat assignment. So we stay standing next to the gate until the agent tells us to sit and we will get a seat after boarding. He was right. But what I do not understand is, the flight was half empty. LOT was telling us that the flight was mostly full, even though it was not even close. We were told some people canceled, but not before leaving Prague. So you mean to tell me 50% of the booked tickets canceled their seats in the 1 hour we were in the air from Prague to Warsaw? Hard to believe. Not to mention the inflight service is laughable. Someone in first class was given a glass of white wine (we were in the row behind first class) but when the person sitting behind me (so 2 rows behind 1st class) was told they don't have white wine on the flight. Which was a clear lie. They caused us so much stress and so much anxiety. I wouldn't trust them as far as I could throw them. They clearly like to lie to their customers about services on board as well as seat availability. I even purchased a new ticket for my boyfriend and I with Ryanair to Stockholm thinking we could catch our connecting flight to NY that way. So now I'm also out $175 because they caused me so much panic, for literally no reason. They are miserable, and not willing to help at all. They tell you to go to different places to seek help just to be told they can't help you and to go somewhere else. I have no clue how they are a star alliance member when this is how they operate. They could have told us it was half full and we would have felt fine and I wouldn't be out the extra money. Instead they caused unnecessary stress.
1 to 10 of 583 Reviews