✅ Trip Verified | Lombok to Surabaya. By far the worst airline I've ever encountered. The person checking us in didn't even look at us, she was too busy flirting with someone else. Just unbelievably bad service. Previous times I've flown Lion air have been equally as bad. Terrible customer service and the flights are nearly almost always late. I will never be flying with them again.
1/10

✅ Trip Verified | Terrible experience! The airline delayed my morning flight from Denpasar to Jakarta by 4 hours and did not notify me. They do not even tell me about the delay at the check-in counter. I figure it out by looking at the time on the boarding pass! I reason with them that if I take this flight I’ll miss my connection to Kuala Lumpur. They don’t seem to care at all. All they kept saying was if you’re not happy, we’ll provide a refund. Nobody even moves a needle to help a customer out. I had to run from pillar to post to cancel my ticket, book another flight and obtain my refund. Horrible airline. They should be banned!
1/10

"turns out I missed my flight"

✅ Trip Verified | Jakarta to Singapore. This is the most horrible experience i’ve encountered. They didn’t have any sort of organisation or communication skills towards their customers. I was waiting in line at the checkin counter almost for 30 minutes and i have been asking which checkin counter is for my flight and it turns out that it was different. When i got there turns out I missed my flight because nobody was there to help or answer my question. Never use this airline ever again
1/10

"by far the worst airline"

✅ Trip Verified | Jakarta to Denpasar. After the flight was already 30 minutes delayed, I had to search for information myself, only to find out that there would be a delay of 45 minutes because of "technical difficulties". The airline's zero information policy towards its guests is shameful. Passengers are not "customers" at Lion Air, but simply "numbers". Not even the minimum requirements in the linguistic handling of passengers of other countries are met by the cabin crew. The crew speak a gaping English and can barely communicate with simple sentences. Even though the planes are outwardly standard, the care inside the planes is miserable. The cabin is dirty and more like a citybus instead of an airplane. Departure times are more of a guideline and changed at will, information will not be shared, the airline's constant delays are really "remarkable". On the returning our flight should have been 3 hours late without any advance information. It was not until I took a look at the boarding card that there was a different departure time than planned. Asked about the new departure time, the check-in staff member from Lion only commented: "Yes a new shedule time ... we have technical problems with our aircraft" ... then it would be better to rebook and return to Jakarta with another airline. As a passenger, I would like to be informed about changes to the timetable, etc. without being asked to do so and not have to do my own research first. There is also no service on board. Unless you pay. Is so far to agree with the pricing policy of the airline, but not that one can not even place his orders in English. For me it is by far the worst airline with which I have flown so far. Never again!
1/10

"we were charged outrageous prices"

Not Verified | Denpasar to Kuala Lumpur. We feel like the airline has been very unfair to us and so will not be looking to fly with them again. The main reason is that we were charged extortionate prices for luggage check in despite having no other option. We could not add luggage on their website, and even if we could, they would not only accept Indonesian cards for payment so we had to use an alternative booking site which gave us no option to add luggage in advance. Then when we turn up and we were charged outrageous prices, more than I've ever paid before. We complained to absolutely no sympathy. Very unhappy with the experience. Will not be looking to fly again with Lion Air.
4/10

✅ Trip Verified | Makassar to Surabaya. Searching for the cheapest on this route, but finally get this airlines, but finally realize this is not cheap enough. A little bit delay, because high traffic before take off. 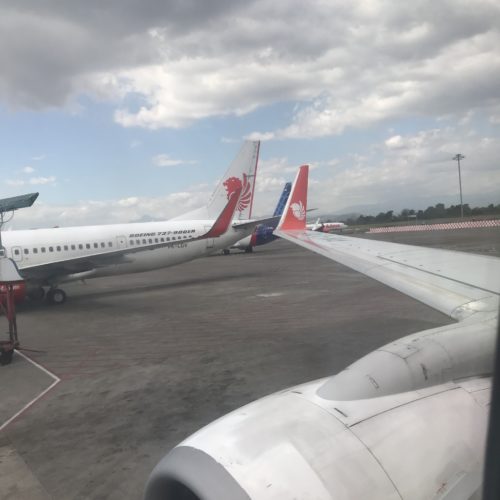 ✅ Trip Verified | Makassar to Singapore via Jakarta. Expensive baggage price, and a crowded flight, The check-in took around 50 minutes, quite upset with the check-in service, but the staff is trying to do their best and help us.
2/10

"could barely fit my legs in"

✅ Trip Verified | Lombok to Bali. I'm 6'2" and could barely fit my legs in, would be impossible for taller people. Shortest leg room I've ever experienced, do not take anything other than very short flights.
1/10

✅ Trip Verified | Bangkok to Krabi. My friend and I paid for return flights and hold luggage. We could not check in on-line for the return journey as their website was not working and when we got to the airport we were told we had not paid for hold luggage. Despite showing a receipt they made us pay THB 3900 and THB 3000 on our debit and credit cards or we could not fly. We both felt totally humiliated and it ruined a good holiday to end it that way. I will never fly with this airline again!
1/10

✅ Trip Verified | Singapore to Jakarta. The airline entered my name twice on the ticket and upon calling them they kept on asking me to ring another number, noting that not all were local numbers. At one stage I was on hold for 45min (international) before I spoke to a person and then they hung up on me! In the end they charged my $32 for removing the duplicate name from my ticket. The worst customer service I have ever experienced!
11 to 20 of 182 Reviews