Not Verified | Very frustrating flying with LAM. So I was flying today, Maputo to Johannesburg. The ground hostesses makes it feel like flying with them is a crime. They hardly help passengers. I was on roaming and for some reason my data went off. When I got to the counter for check in the lady asked me if I had downloaded the pre arrival application app for South Africa. I asked what it was for she couldn't even explain. That lady was forcing every passenger to download the app which on getting to South Africa, no one asked for it. LAM, How can you FORCE people to download something that even your employees cant explain. I also feel those ladies need some training on customer care. Updating your website will be of help to everyone!!
6/10

Not Verified | Johannesburg to Maputo. The plane was showing its age. The cabin manager was the only who seemed to speak English. The flight was overall good. The food was not great. After seeing the food I opted out. I would rather fly on South African Airways on this route, the airline does not have a great reputation. It would be a good cheap option to get from a to b.
1/10

"such a poor service"

✅ Trip Verified | On Wednesday we booked tickets to travel to Maputo and back over the weekend as me and my partner needed to be at the South African embassy Friday 14 June. When we checked in for our flight we were told the flight was 2 hours late. After 2 hours we went through the gate to wait to board and to our surprise to hear the flight is delayed by another hour. I will not make it in time for the embassy and will have to pay to change my tickets to a different day. I've never made use of such a poor service and I am deeply disgusted, also won't recommend this airline to anyone. I'll rather pay more and be sure i will be on time from point A to point B.
1/10

"would not recommend them"

✅ Trip Verified | Beira to Johannesburg. I'm very disappointed with this airline. I have a shuttle service which I use to travel from Johannesburg to Witbank Mpumalanga 110 km from the airport. Got to the airport to check in for my flight to Johannesburg, supposed to leave at 13h10 to find out flight has been changed from 13h10 to 15h20 Beira via Maputo then to Johannesburg. Now I'm screwed as I will miss this shuttle service which i paid for and it's non refundable at last minute. This airline does not take responsibility for their actions. This is not the first encounter I have with them. I really would not recommend them for the future.
1/10

✅ Trip Verified | Our flight from Johannesburg via Maputo to Inhambane was delayed in Maputo by an hour. The return flight has been an absolute nightmare. Our 15h25 flight from Inhambane to Maputo was delayed, we think due to the minister of health arriving in Inhambane, which resulted in us missing our connecting flight to Jhb from Maputo. The plane went via Vilancoulos to get to Maputo. When we arrived at Vilancoulos, for what should have been a short drop off and pick up, we ended up being on the runway for two hours waiting for the plane to be refuelled, which took so long because there are outstanding bills that LAM haven’t paid to BP. We finally got to Maputo at 22h00 and were finally checked into our hotel at 00h30. We we scheduled to catch the 06h50 LAM flight to Jhb. We have been told that the flight will board at 10h00, it is now 09h00. Who knows when we will get to Jhb and if we will make our flight back to the UK.
1/10

✅ Trip Verified | Inhambane to Johannesburg via Maputo. LAM Mozambique has friendly staff, comfortable seats and the refreshments were fine. It's just a pity that they have such a big problem with theft when it comes to your check-in luggage. My suitcase was locked, and plastic wrapped for added protection. We arrived in Joburg only to find the plastic had been removed completely and the zip was damaged in order to get into the bag. We opened a case on the 11/01/18, and I was told I would get a new bag within 10 days. I've still not received a bag, or any word as to why it is taking so long. Apart from my bag being damage beyond repair, luckily nothing was stolen, but fellow passengers also had their bags broken into and was missing things.
1/10

"luggage had been broken into"

✅ Verified Review | Maputo to Johannesburg. Upon arrival, my luggage and others had been broken into and items were missing. The staff refused to fill out the claims form and said that complaints must be done upstairs in the terminal. All the people flying with transfers could not do that, including me. Read the reviews and fly with another airline.
2/10

✅ Verified Review | Total lack of service. I was supposed to fly Maputo to Tete at 12h35 and arrive at 14h15 which is normal. They let us know that the flight was changed to 23h55 landing in Tete at 03h10 because it was via Nampula. Flight eventually left Maputo at 00h30 and landed in Tete 04h10. There was no communication from LAM while we were waiting at the terminal to let us know of these delays. It was obvious that they were picking up passengers at these cities to fill the plane the same one would do with a mini bus! Do not book any appointments when you fly LAM especially domestic as it is a wasted day.
10/10

"I would fly LAM again"

✅ Verified Review | Johannesburg to Maputo return. Excellent experience on a short flight aboard an Embraer RJ145. Flight perfectly on time, only one FA in this small aircraft, who was very profesional, good communication from captain. A very short flight (45 mn), but we were offered a true snack in a box, drinks, and latter again water. Great! I would fly LAM again.
1/10

✅ Verified Review | Airline from hell. LAM stands for late and maybe and it goes beyond that in living up to its infamous reputation. A 30 min flight from Maputo to Inhambane was postponed from 10 am to 1 PM. I checked in for the 1 PM flight only to find out the flight was delayed to 3 PM. The airline, surprisingly provided free lunch at the staff canteen. At 3 PM, they cancelled the flight due to technical snag. After countless arguments and temper tantrums, the staff put us up in a very good hotel in Maputo. Many people have written negative reviews about this airline. If you want to use this airline with the fear that your flight will be cancelled, buy a ticket and hopefully get a free lunch and delightful free hotel stay in Maputo until eternity. If you like other travellers, wish to actually move and not enjoy seeing the airline notice board, use Mozambique's bus services - at least you will get somewhere. **ASKED FOR TICKET 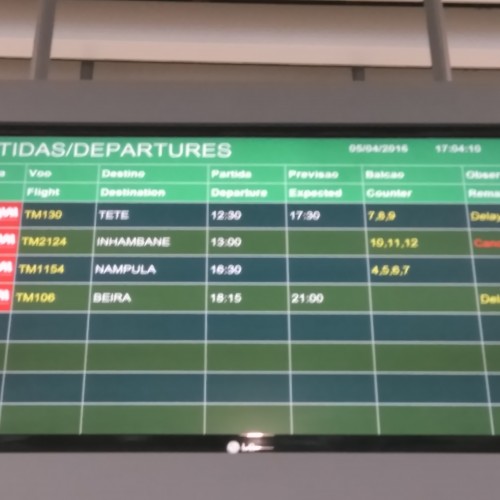