✅ Trip Verified | Short trip with one layover. Flight cancelled and rebooked on short notice to very inconvenient time. The two delayed flights. Nonexistent customer service. Even in their home airport there is no help desk. Rude and inflexible staff at the airport. I would advise against using KLM if at all possible. I have only heard bad things about their so called customer service. 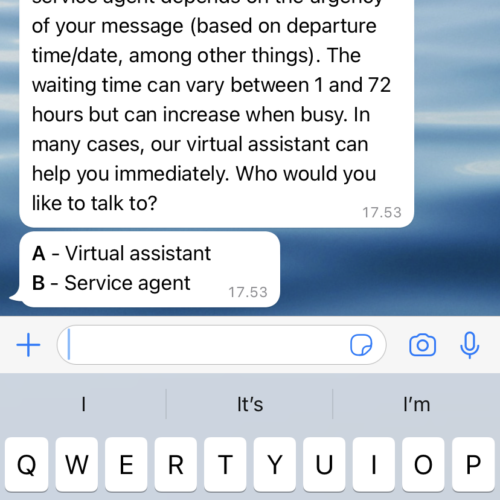 "changed the momentum from negative to very positive"

✅ Trip Verified | The flight from Rome to Amsterdam was delayed by an hour, which affected my next connection. The lovely stewardesses changed the momentum from negative to very positive. They did everything possible to answer all my questions, provide information on connection and the gates, and did that while having a friendly smile on their faces.
1/10

✅ Trip Verified | Fly KLM regularly and have never left and thus arrived on time. Unfortunately I work for a Dutch company that has to use them so there is no chance for me - choose any other airline instead of this very expensive airline.
10/10

"The food was delicious"

✅ Trip Verified | After a flight in Economy to Amsterdam I pampered myself with an upgrade into Business Class. The transfer in Amsterdam was easy and nice. I did not had to take out the computers and the liquids at the security check like three years ago. Amazing and so convenient. My stay at the lounge was nice and my favourite place was the open terrace. Boarding was easy and simple. A nice welcome on board and a most amazing crew. I felt immediately welcome. The single seat where I can get in and out without bothering someone else was very nice. In the sleeping position it was a bit claustrophobic for me, especially in the area of the legs. But otherwise the seat is nice and comfortable. The food was delicious as I have expected it. The KLM catering in Amsterdam is very good. They did a great job. The more than 11 hours flight was without any special problems. It was smooth and nice. Arrival in Mexico City was chaotic as always. Actually I must confess that the immigration was working very fast. But the receive the baggage was a bit of a nightmare. They moved it from belt to belt but finally the luggage got delivered. Thanks again to the crew. They were all amazing and did go a step further than they need to do.
9/10

"they will see me again on board"

✅ Trip Verified | It was my first flight after three years. Many things have changed and it is not that easy anymore. But even the preparation for my flight were easy with KLM. All the information concerning Covid I could find on there web page. That way I was well prepared to get to the airport. The Economy Class seat had not changed. Everything as three years ago. The staff was nice and helpful. What I have to complain about is the situation that they do not offer two different meals any more. For dinner we had only a pasta which will be fine for vegetarians too. Unfortunately the quality of that was not the best. At least for breakfast we had the choice between an egg dish and a sweet dish. What I noticed was that my neighbour had a bigger portion than me. That was concerning the fruits and the egg. I got the feeling that I had the leftovers. All together that means the catering is not the best in Cape Town. KLM should look for another catering company or check the one more often. The flight itself was without any special events. We were slightly delayed because of a computer problem at check in. But that could happen anytime with everyone. Finally I must say it was a nice experience again and they will see me again on board.
1/10

✅ Trip Verified | Flight booked from Amsterdam to Edinburgh. 4 hour security queue at Schipol during which we were informed our flight home to Edinburgh had been cancelled. No KLM staff to speak with, KLM's phone service was no use at all. Eventually got airside to try to arrange transfer, no KLM staff to be found anywhere for at least an hour, probably hiding from customers. Automated transfer kiosks would not work. Eventually tracked down a KLM agent who had clearly been told to wash her hands of the situation and told us to find a hotel for however long it takes before we were rebooked on to the next flight. That flight was 2 days later. No attempt to help us, and we were basically abandoned by KLM. They don't care about their customers; once they have your money they are happy to abandon their duty of care to their customers is soon as it suits them, and no attempt will be made to help, and they will do everything in their power to avoid paying compensation. I requested compensation for the cancelled flight and was given the usual air traffic excuse (not KLM's fault, nothing ever is) and told I wasn't entitled to compensation. The usual air-traffic excuse is quite pathetic, it's a go-to excuse all airlines wheel out when they're trying to weasel their way out of paying out compensation to customers for their bad management.  The fact is that no attempt was made to assist with finding us accommodation until the rebooked flight 2 days later departed, and we were abandoned by KLM right at the point at which their duty-of-care to their customers should have come into place.   I will never fly KLM again.
1/10

✅ Trip Verified | Had to wait in a Line for 4 hours to check-in at the desk. At Vancouver airport my suitcase was missing. But there was no KLM official available to make a report. So, I had to go back next day to get that done. After An online check of my report I found out that they had misspelled my name, my email address and my telephone number. I tried to contact KLM by phone (3 different numbers) and 3 days in a row but received the message that I would be disconnected because of too Many calls, then I tried Whatsapp. Somebody (or was it a computer?) reacted asking me if I would like to have contact with An agent. I answered yes and received the message that the agent would contact me as soon as possible. Three days later still no further response. KLM, once a high quality airline has dropped to the lowest possible quality of airlines that I have ever flown with.
1/10

✅ Trip Verified | Terrible airline! First they cancel our flight without informing us and they just put us on a flight the next day. After being on hold for more than an hour with their customer service I was able to change it to a different flight. Then we arrive at Schiphol and our luggage get’s lost. It’s been 5 days now and still no sign of our luggage. Many phone calls later and being on hold for hours no one is able to give me a timeline on when we can expect our luggage or information about some sort of compensation for having to buy new clothes, toiletries etc. for a family of 5. This is causing us a lot of stress and taking a lot of joy out of our vacation. It’s an absolute disgrace!
2/10

"they will kill the joy of flying"

✅ Trip Verified | The biggest rip-off baggage excess ever. €125 for 3.7kg. For overseas flights that’s really punitive. Delays and strikes not included in the price, they will kill the joy of flying.
1 to 10 of 1318 Reviews