"customer service that is completely non-existent"

✅ Trip Verified | I think the worst airline I have ever travelled. Do not use them unless you have to. Business class is the worst I have flown - uncomfortable seats, poor quality food and the worst entertainment I have seen on an airline. To cap it all they have lost my baggage which is where they unravel even further with customer service that is completely non-existent. They don't answer the phone, don't respond to emails and their online chat means waiting for 30 minutes and then realising that they actually have no one there at any time of day. It's a novel way of taking responsibility for their failings - just don't answer. I cannot understand how Sky Team can associate with this airline. I will not fly with them again and nor will anyone in my business.
7/10

"it needs to offer a better and more memorable service"

✅ Trip Verified | Business passengers went on last because the economy passengers would have walked past two business rows. This was, obviously, for covid-19 reasons but given that every passenger had had a negative PCR test it seemed a little pointless. There was a noticeable degree of irritation among those who had been made to wait until last especially as it is branded ‘Sky Priority’. The seats seemed slightly worn and although the dimmable windows are a nice touch in the 787 they are not as effective as pull-down blinds. We were offered soft drinks before take-off but they produced a glass of champagne when I asked. Breakfast was served before the lights went out. For the main meal the choice was beef, chicken or vegetarian. The cabin crew were polite and efficient although with so much protective equipment it felt more like being in an operating theatre rather than a plane. The food seemed bland and uninspiring. There were no major issues with this flight but if Kenya Airways wants to attract premium passengers post-covid it needs to offer a better and more memorable service. 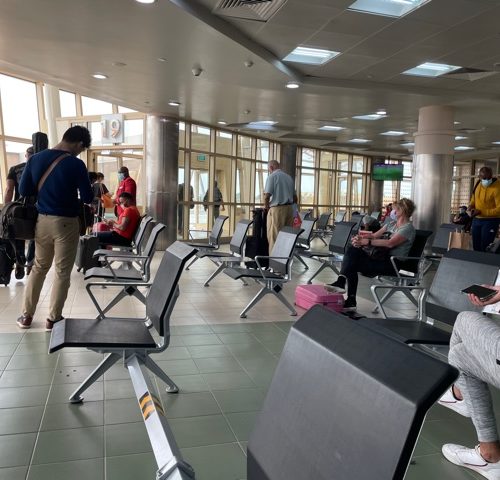 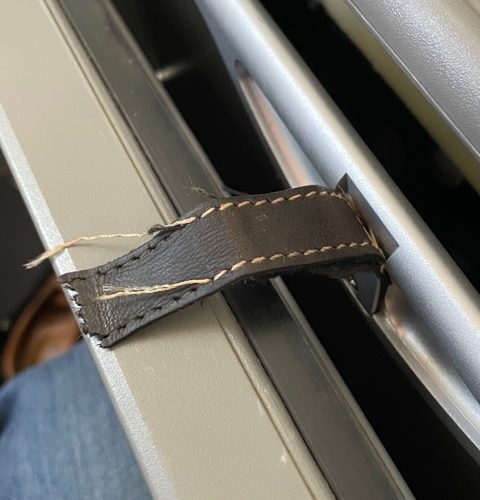 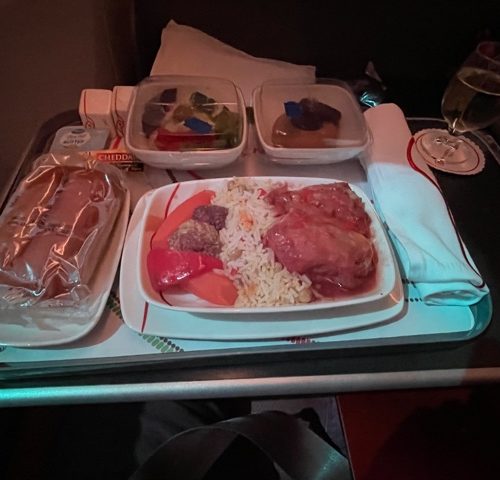 "it needs to stop penny-pinching"

✅ Trip Verified | This was not my first time flying business with Kenya Airways but it was definitely not the best. The Plaza lounge at LHR was not serving alcohol on the basis that the food was not ‘substantial’. Boarding was chaotic – although there was a business line everyone was using it. After eventually getting on the aircraft, and after a long wait, I was offered a small glass of champagne. Seating was old-style parallel pair, business was about half full and there were signs of ageing. It then took an inordinate amount of time for the meal to be served – choice was “meat or chicken”. It was probably the first time ever that the starter and main course were both rice. The flight was uneventful and although not fully flat-bed I did manage to sleep. No bottle of water was provided. Breakfast was a small dry croissant, yogurt and a small bowl of fruit. I know airlines are struggling but given how much I paid for the ticket to have a service which was not as good as premium economy on some other airlines was frustrating. If Kenya Airways wants to compete with its rivals it needs to stop penny-pinching and offer its business customers a level of service which justifies what they have paid. 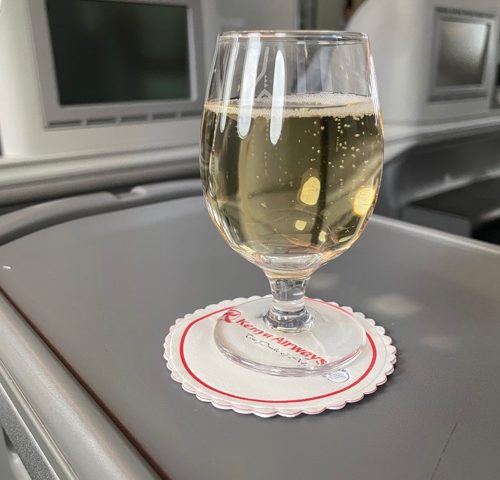 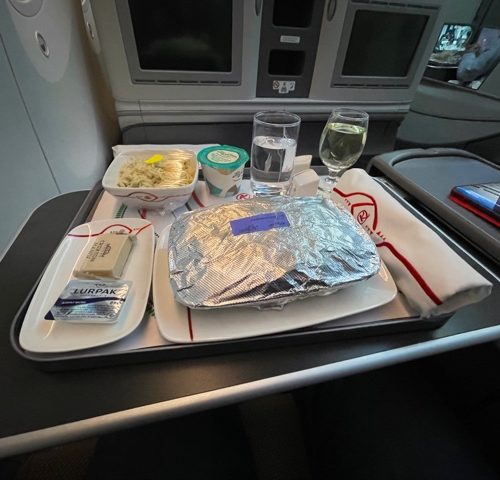 "crew was very hospitable and polite"

✅ Trip Verified | Entebbe to Johannesburg via Nairobi. The crew was very hospitable and polite. Good time management as well. However the crew responsible for announcements should stop eating the words and try to be more audible.
1/10

"We don't recommend this airline at all"

✅ Trip Verified | Horrible, they canceled our flight 3 days before it was meant to happen. They told us we could fly only 2 weeks later which was impossible for us. As a result, we had to spend over 1000 USD to get to our destination. When we asked for compensation, they offered us a 150 USD travel voucher even if we told them that we won't be able to travel in the next two years. They refused to convert it to a compensation refund. Really bad service. Never again! We don't recommend this airline at all!
3/10

"more than disappointed with Kenya Airways"

✅ Trip Verified | I am more than disappointed with Kenya Airways which not only misplaced my luggage but has till this moment not been able to give me any response despite the numerous attempts I made either in writing to their headquarter or personally visiting their Dubai airport terminal 1 office since August 18th 2020 that I arrived Dubai till date. Given this present circumstance, I doubt if I can recommend this airlines to someone else if nothing is done to prevent such occurrences in future because I'm not an isolated example.
1/10

Not Verified | Extremely unsatisfied customers. We have been trying to rebook our flights to Kenya for the last 6 months with only one response which was on Christmas Eve of 2020 and we haven't heard anything from them ever since. We have a booked and paid for trip which we had to rebook due to covid-19 in 2020. Our trip is expected to be this April (2021), and we had supposedly received our cancelled flights in the form of a refunded 'voucher' which was never ever received from the airline. We then received (on Christmas Eve) a link to our supposedly 'new flights' which had a time frame to a payment portal from 15h00-17h30/18h00 roughly... let me reiterate, on Christmas Eve, who is checking their emails to rebook flights in such a short time frame? We then tried to access the portal that night at 19h00 and we could not access it to pay an additional fee (when this was supposed to be fully refunded I might add) for our flights in April. I have sent roughly 50 emails to the airline, and that doesn't include my partners emails to Kenya Airways. We have heard nothing back from them, and they have about R35 000 of our money in promised refunded tickets which we do not have and cannot get hold of anybody from Kenya Airways. This is beyond unprofessional and I have literally tried to contact any/everyone I possibly could from Kenya Airway.
1/10

"Have not been able to get any compensation"

✅ Trip Verified | Flight KQ101 to Johannesburg via Nairobi was meant to depart LHR on 8th February. Flight was at the gate, but boarding time kept getting delayed and delayed and was eventually canceled. Then complete chaos ensued. Kenya Airways do not have a desk at LHR. Tried to call 020 8283 1818 several times on the 8/2 and 9/2 but no answer and then line was disconnected. Was directed to hotel at LHR and then told flight was going to leave, turned out it wasn't so was directed back to hotel. At no point as there any customer service offered to customers. Kenya Airways made no attempt to rebook me on another flight or contact me at all. So had to purchase an alternative flight with SAA at considerable cost as I needed to leave that night. Have not been able to get any compensation at all for cancellation, alternative flight, no apology at all. Is it any wonder that no one wants to travel anymore when Airlines/Tour operators treat customers so appalling, you deserve to all go under.
1/10

Not Verified | I booked tickets to travel and had to make changes to the ticket, I contacted them via numerous emails and no response, their website says a change in ticket can be made at a cost even during this pandemic and for a first time change, I reached out to them explaining i am unable to pay for the penalty, they refused to respond rather they informed their back office team to increase the price of the tickets and then they responded quoting amounts triple to what the website says, I explained to them and they refused to do anything about it. I checked back on their website a week later and they had dropped the price of change of the ticket to double rather than triple, I contacted them as they intentionally removed the option to change my ticket online, they said they had sent a payment link - well payment link that says I pay triple when your website currently says it's a double payment. I requested they send a new payment link, of course they refused. A few hours later they informed their back office team to triple the price of change of ticket again. Avoid this airline by all means.
2/10

✅ Trip Verified | After cancelling two of my flights, KQ offered me options and I chose to travel KLM from Amsterdam to Nairobi to wait for my flight from NAirobi to Abidjan. Thought my original journey was all KQ flights, and I paid for 4 bags from Amsterdam to Abidjan, the second leg of my journey only had 2 bags covered in my baggage allowance. In other words, KQ basically robbed me as I had to leave 2 of my bags behind. Now I have to find a way to get my bags to my final destination, which is undoubtedly going to cost even more than paying for 2 bags did. I am extremely disappointed in the services that were provided. I am moving for KQ to refund me the money for my bags, seeing as I paid for a service I was not provided.
1 to 10 of 353 Reviews