✅ Verified Review | Overall, Jin Air is a solid low cost carrier. I flew a roughly 5 hour route between Incheon and Vientiane, and the experience was generally positive. My only complaint is regarding seat comfort. The seats seem to be narrower than those on other airlines I have flown, and the pitch is nothing to brag about. One tip is that on the B737, do not take an aisle seat. There is some sort of metal box bolted underneath the seat in front of you, taking up a significant fraction of the space where your feet might go (if you stretch your legs out so that your feet go underneath the seat in front of you). This seems to be the case for all the aisle seats, and believe me, my feet were in a very uncomfortable position. Otherwise, I have only good things to say. The flight crew were friendly and helpful (although I didn't need anything unusual that would require great service anyway). Operations were smooth, and the staff at the gate did a good job. I was running late because of a delay in my connecting flight, and they checked me in right away with no worries. The food they served was solid. It was less than one would receive on a 5 hour flight from a flagship Asian carrier, but better than what you would hope for in North America and acceptable given the low cost. On the ICN-VTE leg, it was dinner time and they served a simple starchy rice with mixed vegetables-very tasty. On the way back it was breakfast hours and they served a basic combo of yogurt, fruit, and a roll. The meals come in a charming cardboard box designed with the Jin Air logo and colors. One remarkable thing about Jin Air is its concept-while an airline's brand won't affect your flight experience in the same way as seat size or staff friendliness, it plays a fundamental role in the mental experience you have while travelling. Many kudos to the flight attendant uniforms, with their minimalist style: jeans, a green top, and a hairpin in the shape of the Jin Air logo (a butterfly designed so that there is an image of a plane formed in the blank space between the wings).
10/10

Seoul Incheon to Chitose, and this is my first trip on board Jin Air. This is a low cost airline, no in flight entertainment on board. Nonetheless, the crew are vibrant young, friendly, attentive that keeps walking on the aisle on the aircraft to ensure passengers are well taken care. This is definitely the best low cost airline I ever flown. I shall definitely look forward to travel Jinair again. 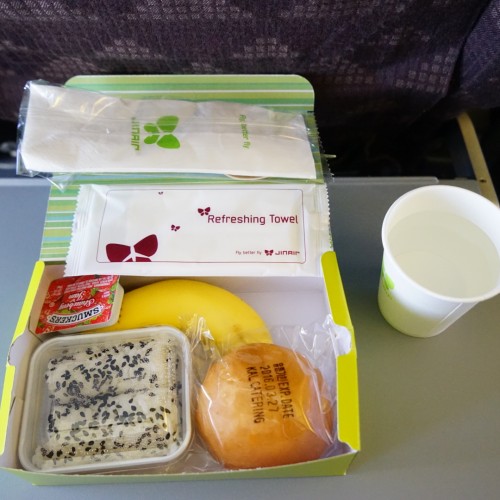 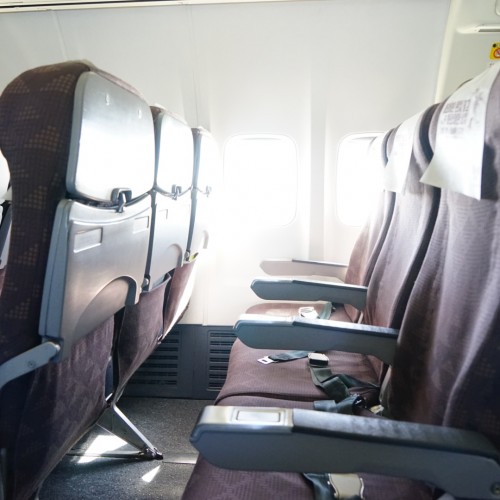 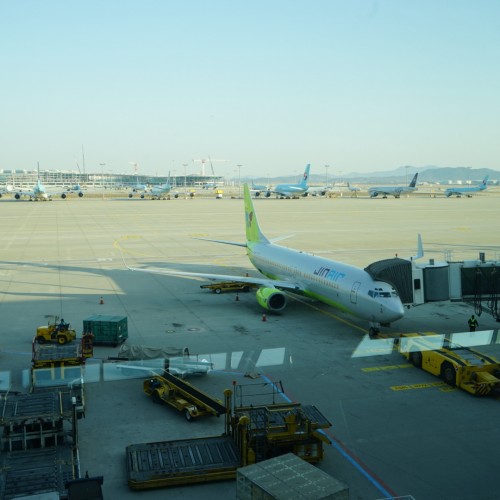 Jin Air is a low-cost carrier owned by Korean Air. Old aircraft, no in-flight entertainment. Friendly flight attendants and excellent low cost service onboard. It was a pleasant flight overall.
1/10

Strictly a ride from one place to another and not a very good ride at that. There were no pillows, blankets, headphones, or TVs. Just a seat. They served a lunch box with cold snacks and a cup of water. They did have was plenty of screaming babies, for 4.5 hours one would start and the others would chime in. So, you folks that had a good flight, good on you. But for my money I will read the fine print a little closer when I book a flight with Korean Air only to have it operated by Jin Air.
10/10

Flight from GMP-CJU. Emergency seats are offered for free. Also luggage. Free drinks and friendly cabin crew. What else for a LCC? I wish we could have such a LCC here in Europe.
9/10

LJ001 on 15 December 2013 travelling from ICN to BKK. This is supposed to be a budget airline. Indeed there were no TV's on board and the second meal (the first was something in between a full meal and a snack) had to be paid for. Otherwise great service from this airline. I for one never had an airline where the staff were walking up and down the aisle with drinks so often just waiting for a chance to serve you. Just before landing staff turned on the music and started a dance/exercise which they invited you to join in with so you could stretch and get your blood flowing. Finally if you really miss your TV for just a few dollars you can rent one of those handheld playstations. All in all for me a great experience and I would certainly recommend this airline.
8/10

HKG-ICN. This is a Korean low cost carrier. Low cost in the Asian sense (you still get a meal box and numbered seating). I used them having got stuck in Hong Kong after a problem with my Cathay ticket. The station manager at Hong Kong was very helpful. The flight was a third full and the service friendly and efficient. On-time arrival made all the difference. I would definitely recommend.
7/10

HKG-Cheju return - a special chartered flight. This is a new budget airline mostly using the old aircraft of Korean air (domestic). All economy with 3-3 seating. Check in at HK airport was painfully slow but it's made up for with courteous service onboard. Cabin crew are smartly dressed creating an energetic image. For a 3 hour flight juice and coffee as well as a snack box are provided free. No TV or any forms of inflight entertainment so be sure to bring your own. Overall the experience was a pleasant one. If the ticket price is right I don't mind to fly with them again.
9/10

ICN-MFM. Very nice flight for an airline I haven't even heard of. Almost as good as the As8anja Airlines transpacific that I had before it. Also offers a very nice price. Food was served.
11 to 19 of 19 Reviews