Not Verified | We checked on flight radar before leaving the hotel to find our flight delayed but according to the rep it was on time. Getting to the gates was straight forward but we soon realised there was a problem when we found out 4 flights from the UK were all delayed by around an hour. The staff fed us some cock and bull story about why the delays had happened. The gate was rammed with travellers, not enough seats for everyone a lot had to sit on the floor. Terrible service Jet2. 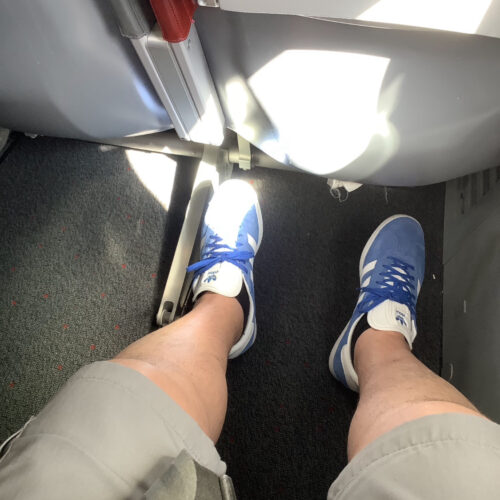 "overall must do better"

✅ Trip Verified | They are low-cost, no IFE (take a good book to read),no free food , but reliable and honest, with transparent pricing and their inclusion of 22kg luggage in the ticket price makes them a deal cheaper than lots of other low-cost carriers. Until my last trip the worst I could say was that the music they play over the PA during boarding was loud and irritating, especially as they seem to be only prepared to pay royalties for one song played ad nauseam. However on my last trip the mighty have fallen. Departure of the flight was delayed by a whole hour, not much of which was made up during the flight. The only explanation was "operational reasons" which could mean anything from an unfavourable conjunction of the Planets upwards. On the return again delayed, albeit by only 40 minutes, which was never even mentioned at the Airport or on the aircraft I was disappointed and hope, in future, they will buck their ideas up and I was just unfortunate with this trip but overall must do better.
1/10

Not Verified | Dreadful uncommunicative airline. We have needlessly spent hours at Birmingham airport today as they failed to communicate a long delay. We only have a short time In Barcelona and this airline has ruined it. It appeared on the notice board about the delay long before they had the decency to notify us. Never again.
10/10

"how pleased we were with our recent flight"

✅ Trip Verified | I feel the need to say how pleased we were with our recent flight too Antalya from Bristol on 25/2/2022. The crew going out to Antalya from Bristol was absolutely amazing. . As for disembarking from the flight the control they had by ensuring each row left the plane in order was to me amazing. Normally you are all trying to get out of your seats at the same time. The return flight from Antalya was a Wonderful experience too. I can only say it was the first time us using Jet2 but it definitely will not be our last. Well done for a first class service from a very grateful customer.
1/10

✅ Trip Verified | Flight delay for 6 hours, they made us wait for 1 hour and put us on plane under the rain! Cabin crew are very rude and disrespectful. My daughter didn't have a pushchair when we landed in Amsterdam! Lost! How could such a thing happen? My daughter does not have a pushchair at the moment on holiday. I never recommend this airline!
10/10

"very impressed by the comfort"

Not Verified | First time we have flown with this airline. We were very impressed by the comfort, meals and service offered during the flight. We needed the assistance of Lynn the resort rep and she was excellent and most helpful, she even phoned us later on in the evening to check everything was ok.
10/10

" Customer service rep was excellent ambassador for the airline"

Not Verified | I tested positive for covid 2 days before my honeymoon and on the day of my wedding got the result, whilst ringing round cancelling receptions, photographers, I had to ring Jet2, they were brilliant and although did not have to have refunded my honeymoon amount in full. Would you get that with Ryanair, I think not. Customer service rep was excellent ambassador for the airline.
1/10

"Sold me a flight that doesn’t exist"

✅ Trip Verified | Sold me a flight that doesn’t exist! Nasty shock at Dubrovnik Airport to find the flight sold to me by Jet2 and confirmed does not operate. Customer service? You must be joking! Stranded, out of pocket, no answer when I called. Good luck to you and your family if you risk your holiday with this outfit.
1/10

"drag their heels about the main refund"

Not Verified | I booked a holiday to Crete with Jet2. This was originally booked pre-covid and has bounced around for nearly two years. Aware that this was an amber list destination I booked and paid for £980 worth of covid tests. As per Government regulations. One week before we were due to fly, Jet2 cancelled the holiday. Reason given? Its on the amber list. It was on the amber list when it was booked. So, that means that they never intended to let us fly, despite taking nearly £5k. They were waiting to see if it turned green. Taking money with no intention of carrying out the service/work as it then stands is Fraud. If the criteria was only fly if green, why take the booking? Will they refund the £980 wasted on tests, which have of course, come back negative two hours before we were due to board?. A whole family basically told to F off and spend two weeks hanging about the house. While they drag their heels about the main refund as it makes interest for them in some corporate account.
1/10

"tried to take them to the small claims court"

Not Verified | This review is about a Jet2 Holiday (if you can call it that) back in March 2020. When we arrived at the terminal there was only 1 flight on the departure board .......ours. We flew to Faro to be told that pretty much everything in our resort and parts of our hotel were already locked down so why did their people based in Faro not think to mention this to their bosses in Manchester before we flew out? We had to fly back 2 days later and Jet2 charged us for the flight and 2 nights which should never have taken place in the first place. I tried to take them to the small claims court to get our money back but they wanted to escalate the case meaning that if we had lost we could have had to shell out big money. My advice to anyone in this position is to use a no win no fee lawyer 90% of something is better than 100% of nothing. Anyway one year on and we have 5 foreign holidays booked and none of them with Jet2. In my opinion in most cases their prices are beaten hands down by Easyjet and Tui anyway.
1 to 10 of 551 Reviews