"seat had no storage"

✅ Trip Verified | Melbourne to Tokyo. Did not get off to a good start when Business check in was cluttered with Economy passengers, then ushered to Economy desk. Lounge was an insult to business class passengers. On board, the seat while comfortable, had no storage (window), aisles had some. First business class flight I have flown where a welcome drink was not offered. Amenity kit had no socks. I did not eat on the aircraft, but the flight crew were attentive and polite. I doubt I would choose this airline again for business class travel, which is a shame as I had previously flown Premium Economy and found them brilliant.
10/10

✅ Trip Verified | Shanghai to San Diego via Tokyo. This just might be the best economy class experiences I've had up to this point. The food was amazing - extremely delicate and exquisite. The flow of the service was great and the crew's interaction between passengers was natural and polite. Though flying in economy, I can see JAL incorporates some unique elements into the flight (such as beverages, magazines, and movies). Japan Airlines is the only airline worldwide offering a 2-4-2 config for B787. The pitch and legroom were way beyond satisfactory. Ground services were efficient in both Pudong and Narita and each boarding group was lined separately. Won't hesitate to fly with JAL in the future. 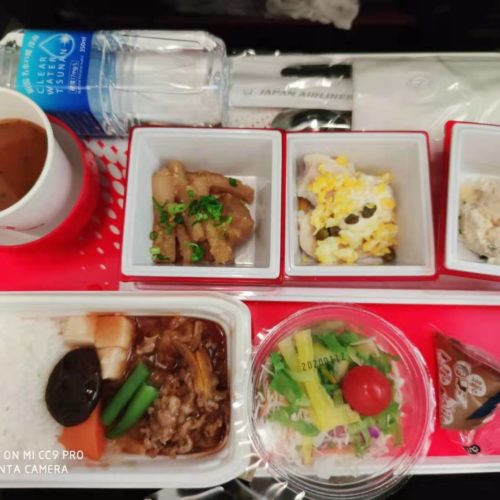 "JL did not disappoint"

Not Verified | Flew with Japan Airlines for first time. There was a 2 hour delay from Vancouver due to bad weather. Airline offered us a meal voucher. It was a full flight and like any other review JL did not disappoint. Staff were polite and flight was uneventful. Ground staff at Narita were very helpful and extremely polite. A few suggestions I like to make. Although there are snacks, it will be a good idea to offer hot noodles (like Cathay offers). The inflight system was mostly in Japanese but it didn't bother me, as I had my music on my cell phone.
4/10

✅ Trip Verified | Tokyo to Kuala Lumpur. This was a code share from Malaysian Airlines and there was some e-ticket number missing in one of the the 3 passenger details. The lady and her superior at check in was quite inefficient at solving the problem we had with our ticket. We were told to call Malaysia Airlines, how can JAL treat us like that. I asked the staff at check in if she could speak to my travel agent in India but she said only if the travel agent speaks in Japanese.
8/10

"JAL is not a disappointment"

✅ Trip Verified | Jakarta to Chicago via Tokyo. My first time with JAL is not a disappointment. The seat space is spacious and the seat is wide enough, making me comfortable sleeping during long haul flight, from Tokyo Narita to Chicago. One thing that I also love is the food quality! It is like eating in a restaurant with stars. In my opinion, JAL's food is the best. I would definitely fly with JAL again. 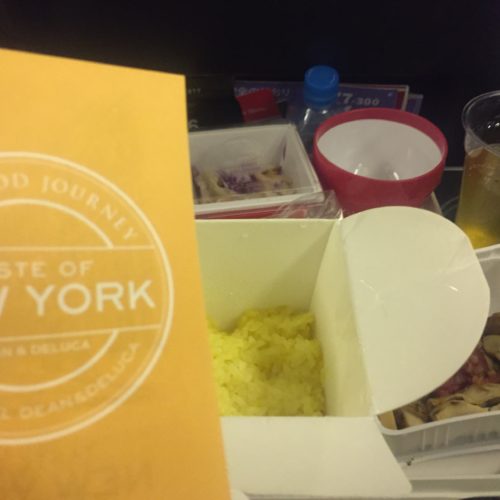 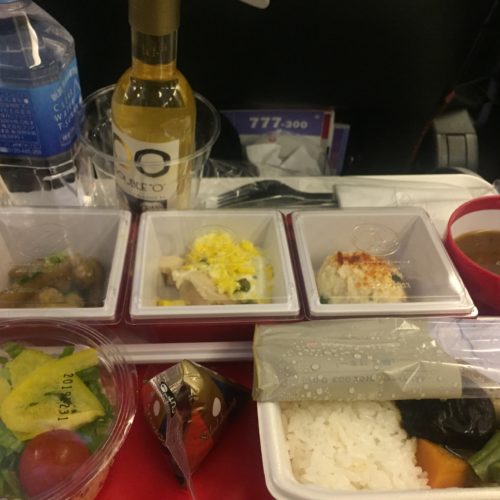 ✅ Trip Verified | Manila to Boston via Tokyo-Narita. The flight from Manila to Tokyo was operated on a B787-8, and the flight from Tokyo to Boston was operated on a B787-9. The infamously horrible traffic in Manila made me arrive at the airport only 57 minutes prior to my departure time. I panicked! Upon arrival at check-in, though, a lady at the business class check-in desk checked me in and assured me that I would make my flight. Indeed, because Japan Airlines boarded the aircraft beginning only 30 minutes before departure and did not close the gate until 10 minutes before departure, things went just fine. I know that many airlines would not be so forgiving of a late arrival. Many airlines also would probably have lost my luggage when I checked it in so late. Not Japan Airlines! It made it all the way to Boston. As for the inflight experience, the flight attendants were polite, friendly, and accommodating. I was seated in a bulkhead seat for the first time in many years, and one of the flight attendants helped me to open up the TV monitor for that seat. The seats were very comfortable. Blankets and pillows were available on both flights. Toothbrushes and toothpaste were available in the lavatories during the flight from Tokyo to Boston. Too bad that there were no amenity kits, but it's always the toothbrushes and toothpaste that I most desire during such flights, so they just barely met my expectations there. Perhaps the least impressive part of the experience was the inflight entertainment. While I appreciated that they offered manga for people to read if they so desired, the selection of movies and TV seemed somewhat lackluster, and it was disappointing that many items were not available with English subtitles. Finally, there was the food. I was served one full meal on the flight from Manila to Tokyo and one full meal and a sort of "light meal" on the flight from Tokyo to Boston. We were also served packaged snacks about 35 minutes prior to landing in Boston, which seemed kind of last-minute to me and a little awkward. The full meals were truly enormous-by far the largest meals I have ever had on a flight. The one served from Manila to Tokyo was perhaps the largest of all. The entree was a sort of chicken in a creamy mushroom sauce, served with sliced carrots, sliced zucchini, and fried rice with egg and vegetables. It also came with a vegetable salad with dressing, a fruit salad, a noodle salad, a potato salad with ham and cheese, miso soup, Haagen-Daaz vanilla ice cream, a chocolate chip cookie, a bottle of water, and your choice of beverage. I found it particularly stunning that Japan Airlines has their own kiwi-apple juice blend which they call "Sky Time Kiwi." Wow! All of the foods I was served were delicious. One criticism I can make of the food is that with the exception of the full meal from Tokyo to Boston, there was no choice for the meal options. That is, you got what you were served. Overall, though, it was a truly Japanese experience, and it was truly excellent. I would gladly fly with them again in the future if they offer tickets at competitive prices like they did this time.
10/10

"all of the food was truly superb"

✅ Trip Verified | Boston to Manila via Tokyo-Narita. The flight from Boston to Tokyo was on a B787-9, and the flight from Tokyo to Manila was on a B787-8. The flight from Boston to Tokyo was scheduled to depart in the middle of a blizzard. Unfortunately, this created some problems regarding preparing the aircraft. We eventually boarded (very quickly, as is Japan Airlines' custom). We then had to wait for a while as our plane was de-iced. We ended up leaving Boston about two hours late. However, the pilots were able to make up for one of those hours in the air, so that we only arrived about one hour late in Tokyo. Another passenger was concerned about making his connecting flight in Tokyo. A flight attendant calmly explained that he would have enough time and that they would hold the flight for him if necessary. This turned out to be unnecessary, as, to my shock, the staff at Narita basically just allowed all arriving passengers with connecting international flights to go directly into the gate area without first clearing security. This was truly a godsend and ensured that people really did make their connecting flights. And since gates weren't supposed to close until just 10 minutes before departure, this meant they did not even have to hold planes for people! As for the inflight experience, it was similar to my experiences from Manila to Boston, except that there was no last-minute snack service just before arriving in Tokyo. Instead, they offered us sweet buns midway through the flight. Again, we were served a full meal on the flight from Boston to Tokyo and on the flight from Tokyo to Manila, as well as a light meal towards the end of the flight from Boston to Tokyo. And once again, with the exception of the full meal from Boston to Tokyo, there were no choices for the meals-there was only one option. However, as usual, all of the food was truly superb. Because I was flying during a different month from my previous flights with Japan Airlines, I noticed they removed from their entertainment system a movie I had begun watching previously and had hoped to finish watching during this trip. That was disappointing. There were toothbrushes and toothpaste available in the lavatories during the flight from Boston to Tokyo, but not until relatively late in the flight. Again, flight attendants and gate staff were fantastic. Another excellent experience on Japan Airlines!
10/10

"One of the best airlines I've flown with"

✅ Trip Verified | Tokyo to London Heathrow. One of the best airlines I've flown with. Clean aircraft, very good food and cabin crew at your service, making sure you are comfortable and don’t need anything. And I was in Eco class. I had the chance to chat with the crew during the flight, attitude free, very simple, but sharply professional. The inflight entertainment can be improved but the essentials were there. The flight was slightly delayed but the crew on the ground kept constatant communication and we ended up landed early. I will definitely fly again with JAL.
8/10

✅ Trip Verified | Tokyo Narita to Busan. This return flight in October gave me great impressions and respect for Japan Airlines. The highlight was the presentation and quality of the meal. The Busan bound flight had a beautiful bento box presented like a gift! Food inside was the yummiest airplane food I've ever tasted! In both flights, I had the luck of sitting on exit row seat. However, the width of the seat gave a cramped feeling. The aircon didn't work well. Interior tapestry was worn and old. The service and politeness from the flight attendants was amazing though. The Tokyo bound flight was delayed by 5 hours due to typhoon. The JAL staff at Busan airport worked so hard with good organization skills to keep every passenger informed, providing extra support, and apologizing at times with bows, even after arrival in Tokyo. This and many other factors - no wonder JAL is a 5-star airline!
10/10

"Had a great experience"

✅ Trip Verified | Chicago to Tokyo Narita. Had a great experience with JAL. Legroom was generous. Seats were well designed. Food was tasty and plentiful. Staff were very helpful and pleasant to deal with. When we almost missed the cutoff time for checked baggage, we received help from a supervisor to get our bags checked in by her personally. JAL made my partner's first trans-Pacific flight an easy experience. My only criticism is that the selection of English movies wasn't very recent.
11 to 20 of 353 Reviews