"Waiting for my baggage for 4 days"

✅ Trip Verified | Tel Aviv to Mexico City via Madrid. Iberia you are the worst airline company ever. I don't know how you still have people who fly with you. Waiting for my baggage for 4 days and still no answer after I gave the location of the baggage. I am in surf trip without my surfboard, I even spoke with the flight staff to let them know that my baggage isn't on the flight, they tell "when you arrived to Mexico City check it".
7/10

✅ Trip Verified | Read the reviews before I travel with Iberia airline and prepare my family of 4 for the unexpected. Surprisingly everything went very smooth for my family both was. My family will fly with them again next Spain holiday. 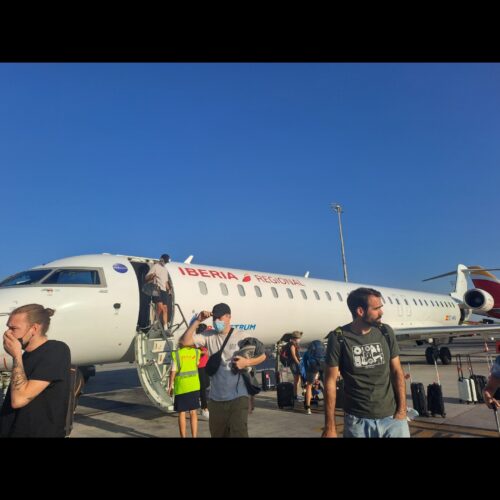 "2 days before the flight they denied the dog"

✅ Trip Verified | If anyone ever wants or needs to transport a pet with Iberia airlines don’t do it! T I verified the day I booked with them that the dog was good to come back and have multiple emails regarding the dog and 2 days before the flight they denied the dog. They changed the reasoning several times. Different responses each time. So long story short I had to repurchase new tickets to return home. They refused to help me at all. I even got hung up on 2 times once by a supervisor.
2/10

"placed in random seats on the back"

✅ Trip Verified | Be cautious when booking. I paid in advance $40 per ticket to choose my seats (two window and two aisle on the same row 28) and was placed in random seats on the back. There were no excuses, no compensation and they would not issue me a refund. The excuse via email was that when the plane configuration changes the seat assignments may change as well. The plane had not changed and I was seated in a middle seat, first row. The tray table was broken, the screen would slide down continuously and I had no room for my personal belongings. Avoid flying Iberia and if you must, be very cautious because they are sneaky without shame.
1/10

"been waiting 3 days for our bags"

✅ Trip Verified | We used flight credits from their previous stuff ups to fly to Morocco. Flights were changed and canceled. 2 hour delays at the airport when we finally got to fly. We had to rearrange our accommodations which of course cost $$$ to take new flights and pay more for these. Then when we left Marrakesh the attendant at the checkin counter forced me to check in my carry on. Told me I could not board if I didn’t as it was a full flight. I told her we had a 40 minute transfer in Madrid and that I was worried our bags would not come with us. She assured me they would, now we are in Croatia and have been waiting 3 days for our bags. Totally ruined our time here as we have to stay at our accommodations in case they show up. No answering phones, no replies to messages, no response to lost baggage claims. Thank you so much Iberia for your pathetic attitude to the customers that keep you in the air. Never ever ever again will I fly with you.
1/10

"unhelpful and not service oriented"

✅ Trip Verified | Where to begin, I guess at the beginning. At check-in their computers were down, so it took a long time to check our luggage in and get boarding passes. Very unhelpful and not service oriented - I pulled up the health screener of my final destination, TLV, but it was not in a format they wanted so they said I would not fly if I couldn't pull it up. 3. Poor customer service. My seats from Madrid to TLV could not be assigned in DFW because they have subcontracted employees without full rights. Our first flight from DFW to Madrid got delayed, which is not a huge deal, but it got delayed even further because they could not match the passenger list with the amount of people on board. The flight crew could not understand the delay either, which they expressed to the passengers. Madrid to TLV was ok. TLV to Madrid 8/12 flight got moved up, I had to change my itinerary, customer service number would hang up on me. I could not find Iberia employees at the airport. Flight delayed and unprofessional - We were told the computers were down, they used a different airplane, and that we could sit anywhere. Then the "musical chairs game began." They started moving passengers left and right to balance the plane, just during take off and landing, then we could go back to our seats. The crew looked confused and dumb, like they didn't know what they were doing (because they didn't). Uncaring and very poor customer service - At Madrid they would not even consider putting me in an earlier flight, after disrupting my schedule, that was operated by AA on Iberia’s behalf because according to the Iberia agent: “They won’t give money to AA for taking you back.” At my arrival in DFW my luggage never arrived, despite being there way early, and the agent they had was again a subcontracted employee without access to their system, very young and untrained. He provided me with a handwritten form to fill out, no reference number was given to me. I did that and left because I was exhausted. 9a. Went to the airport the next day, Iberia’s counter was nowhere to be found, no employee available, nothing, just a ghost airline! The next day I call customer service and they could not help because their system was down, I proceed to explain my ordeal and worries about this flawed system and she replies - “I don’t control what happens at the airport and then cut off the call and sent me to a survey. Second CS call - She had said to call customer service back in 2 hours. I called customer service in 3 hours and the agent located the luggage in Madrid. I asked her to open a formal claim for my luggage, she said she couldn’t do that through her system. I exclaimed - “Then what are my options? I couldn’t do it at the airport, and I can’t do it now either.” She recommended for me to go to their website and fill out my complaint. Third CS call - I explained that I’d like to know if my luggage was in transit, the CS guy asked me for the reference number, and I explained that this airline is not like a normal one that would issue one at the airport. He assured me the luggage was in transit but without that PIR (reference number) they would not deliver it to my house, and I’d have to get it from the airport myself. Granted the airport has no available personnel if there is not a flight they are working, they don’t have a local office or nothing like that.
1/10

✅ Trip Verified | After boarding and taxying at Quito we were stuck for two hours before the pilot said we had an engine failure and had to disembark. They then proceeded to make us go through immigration and wait another two hours for luggage. We had to wait for two hours for information on which hotel we were at and another two hours for a bus. No information on when our flight was and if it was even going to leave for nearly 20 hours. Finally we heard from hotel reception that our flight was scheduled for 10 pm at night (29 hours late). We boarded a bus to the airport. The flight was not live on the airport’s departures. When at the airport the check-in for business took 1 hour as the check-in was severely understaffed. The check-in put the wrong date so we were delayed 30 minutes at immigration while they confirmed the flight even existed. After taking off at 11:30 pm late, the pilot had the audacity to say “we were extremely lucky to be on this flight and that we should thank the technical staff” as we would have had to stay three extra days in Quito had it not been for them as other flights were full”,, merely stating “thank you for your patience”. The lack of communication by the airline was nothing short of abysmal. They lost our luggage on the way to Quito and we had to wait for four days to receive them in the Galapagos one hour before our boat left for 8 days.
1/10

Not Verified | This airline has atrocious customer service. Their representatives confidently tell you incorrect information. We called weeks prior to our flight to change from our planned Porto -> Madrid-> Washington to Madrid -> Washington and the customer service person said no problem just get on in Madrid. We asked are you sure because it wasn’t coming through with a cancellation of Porto to Madrid they said no it’s fine, it obviously was not. Today we came to the airport in Madrid and they put us on standby because we were not on the flight from Porto and now stuck waiting in endless lines to just get help in Madrid to go home.
3/10

"shortage of cabin space for suitcases"

✅ Trip Verified | Boarding the plane was slow compared to other airlines I have flown with. Once inside the aircraft, it obviously became very, very hot since it's summer and packed with passengers, but the ac unit blew very soft wind, so soft that it was barely enough to cooldown. There was a shortage of cabin space for suitcases and bags in so my nephew was forced to had put his suitcase in the cabin space 20 seats in front of him? The staff didn't even politely ask him or even apologize for the inconvenience. It's either this or you can leave your luggage behind, that's how it felt like. The seats were very small and were also kind of hard. Luckily the flight was just three hours.
1/10

"arrived at the airport 2 hours before boarding"

✅ Trip Verified | Worst airline experience I have had. We arrived at the airport 2 hours before boarding time. Check in took over 2 hours to get to the attendant, and they would not let us through or help in any way even though the flight hadn’t yet closed the gates. She would not help us get another flight. The manager was extremely rude and told us nothing would be done. Customer service was not helpful and we lost all of our money. There is no Iberia help desk in Paris. I have never been treated so disrespectfully. Never again.
1 to 10 of 820 Reviews