✅ Trip Verified | Marrakesh to Malta via Madrid. Most disorganized airline I have had the misfortune of flying!! Our complaint with Iberia airlines began when we were stuck waiting to board at the rear doors of the aircraft on the steps in the hot Moroccan sun for 20 minutes, only to be told they needed to close the rear door so we would have to walk to the front. My mother, with her bad knee, and I walked back to the front doors of the aircraft where we were the last ones on board. At the top of the steps a man begins putting tags on our hand luggage without saying a word to us. I ask if this means they will have to be checked and he just says “No space” and gestures inside. I understand we are the last ones on the plane (not intentionally) so there is no space left but they could at least tell us what was happening with our bags instead of taking our luggage without a word. Inside the plane, there is no soap in the toilets which we realized after another passenger spilt Coca Cola on top of my mother wearing all white. Now the belt is ruined, shirt stained, and my mother is completely sticky. On arrival in Madrid, we wait to collect our bags next to the plane as the agent in Marrakech had instructed us. One of the flight attendants informed us that our bags were “probably” en route to the final destination of Malta. We replied that there was no information given, as to our final destination, so we deduced that the bags must be in Madrid. We are then told that “most likely” our bags were in Madrid but we would have to go outside security to collect them and then come back. After waiting at the baggage claim the bags finally arrived. We narrowly made our next flight and were one of the last on this flight as well. On our next flight we were lied to by two agents saying there was absolutely no space for our bags but once we were inside we found at least 10 empty spaces (as well as numerous empty seats) that we could have used rather than leaving our bags to get lost again. Overall a miserable experience flying with Iberia, I would recommend flying any of the low-cost airlines who have a better standard of service than this. I would have rather swam through the med than gone through this. My mother might not have many trips left and this company certainly ruined one of them.
6/10

✅ Trip Verified | Madrid to Gatwick. Flight was on time. At first it looks like the seat pitch is fine. This has been achieved by removing the seat pocket one normally finds below the tray table. However, once person in front declined their seat it became very unpleasant. The tray table came close to my stomach and it would have been very difficult to use the table. Fortunately there was an empty row across and one was able to move seats. The WiFi worked but it only allows you to watch information and movies on Iberia Express page and you are unable to surf the net or send emails, go on Facebook etc. The movie and TV selection was quite good but as there is no seat charger I didn't want to lose my charge so did not use it in the end. The crew were largely absent but drinks and food menu (all charged) was very adequate for short haul budget flight. All in all a pleasant experience bar the ridiculous seats.
9/10

" I really recommend it"

✅ Trip Verified | I flew from Berlin Tegel to Madrid on February 18, the flight was on time and we arrived to Madrid before the set time. Check in was fast too. Nice flight, kind cabin crew, good service and also confortable seats with spacious legroom. I really recommend it.
1/10

✅ Trip Verified | Flew Madrid to London Gatwick. There is very minimal leg room on these planes. I'm not tall (165cm or around 5'5) and I felt cramped in. It's fine for a short flight, but 2.5 hours to London is pushing it. Beware that they will try to force you to check in your luggage, even though there is a lot of space in the cabin. The ground staff were really forceful that the overhead lockers were full, but they were half empty when I got on the plane - whole overhead lockers of empty space. They may claim to be the most punctual airline in the world, but they have downright dishonest ways of doing it. This isn't the first time it's happened to me on this airline. Staff are very much "that's not my job" kind of people. There is absolutely no difference between these flights and the other low cost airlines, except, and I never though I'd say this, the staff on other low cost airlines are a lot better at their jobs. I will be avoiding Iberia Express in future. Unfortunately they do some routes that no one else does, but for those flights I guess I'll just have to accept that there's no way I can be in a rush. 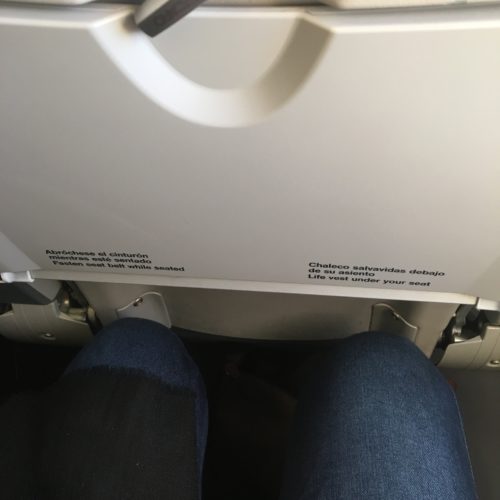 "Not a comfortable experience"

✅ Trip Verified | Gran Canaria to Madrid. From start to finish I felt like there was so many problems. Firstly I arrived at the airport early so I didn't have to leave my baggage in the hold. However everyone who was priority was allowed on before. They put people into groups so I was group 3 the last even though I was the first near the gate. After that my luggage was put into hold. Once on the flight the staff seemed disconnected and also flustered themselves, I suppose because things don't run smooth. The back of my seat was broken so I had to be transferred next to a mother and small baby crying, at this point I just wanted to rest. The food and drinks were overpriced and I had to pay £2.50 for a tea which was that bad I had to ask for it to be changed. The hot water was not warm enough to brew the tea so it ended up looking like dirty dishes water. At the other end of the flight I waited over 20 mins to get off the plane and then a further half an hour to get my bag which was only very small. Not a comfortable experience in total and wouldn't think of flying again with them. easyJet is a much better option for low cost. 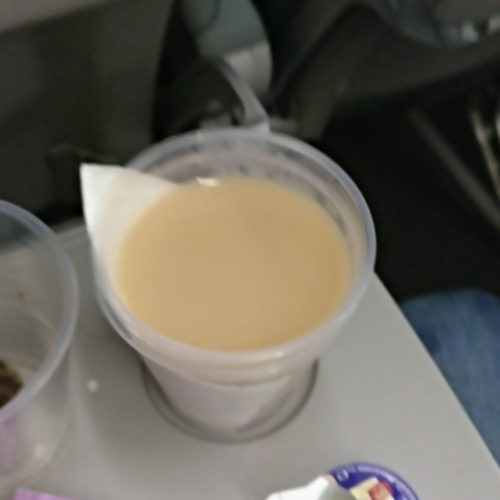 "seat comes with a charging point "

✅ Verified Review | Madrid to Nice. Check-in at Terminal 4 Madrid airport was fairly easy where there are many self service kiosks available. After obtaining a boarding pass from the self service kiosk, I had to drop my check-in baggage at designated counters a short walk away. A staff member checked to ensure that the baggage tag is tagged on correctly before accepting the baggage. The boarding gate was a good 20-25mins walk away. Boarding was orderly. The flight was over 90% full and overhead cabin space was quite limited. Seats in economy cannot recline but it was not a problem. There is no inflight entertainment. Each seat comes with a charging point located below the seat so it takes a bit of a search to be able to locate it. 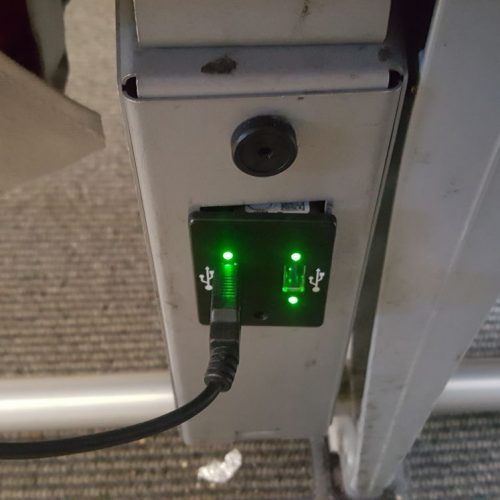 ✅ Verified Review | Madrid to Amsterdam. Overbooking the flight and bumping people off when everyone shows up. We are requested to spend the night at the airport and take the flight the next day (not just a few hours later, but the next day). It is scandalous you pay for a ticket but apparently don't have a guaranteed seat. They assured us that it was the company's policy and it was written in small letters on the terms and conditions of the tickets.
6/10

✅ Verified Review | Madrid to Dublin August 31st. Have flown with these before found them ok, I needed to booked a changeable ticket and as there was very little difference in the full economy fare and businesses class. Check in, lounge, fast-track all fine, boarding was fine too ( usual haul to gate 4 at the very end of Terminal 4) I was in front row and to be honest the seat was not the most comfortable it's the usual standard 3 seats layout with middle seat left free which in theory only gives you more arm room. Cabin crew were nice but very distant and almost came acrosss as Robotic like they were programmed . Inflight meal was omelette, fruit, crossaint (breakfast) I wasn't offered a 2nd cup of coffee and I had to press bell to get a Fanta - my previous flights with Iberia Express found the crew very attentive. The Immfky.com wifi wasn't working and the crew didn't know a lot about it. Overall not bad but, it's a half hearted business class in comparison to others. I would still fly with them.
10/10

"staff were very nice and helpful"

"Value for money too"

✅ Verified Review | Short hop from London Gatwick to Madrid. First time on Iberia Express. Check-in was chaos and was told I was lucky to have a seat as flight was over booked by 10 people. Not good. BA codeshare flight, however you cannot check in at BA static machines to check-in. Manual check in only. Flight was crowded and a bit cramped. But showed all the traits of low-cost (which it is) and a legacy airline for back-up. Crew actually friendly and worked hard which is not always the Iberia way given my previous poor long-haul experiences on Iberia - this point was refreshing today!. Value for money too and would use again. Did not purchase anything but prices looked reasonable.
31 to 40 of 61 Reviews