Not Verified | I traveled on Gulf Air from London to Dubai via Bahrain on 14 December 2021 on the 21.50 night flight for pre Christmas break, I was very happy with the aircraft, it was wide-bodied and the seating was comfortable and spacious. The service on the plane was excellent and the cabin crew were very polite, they served with a smile the Swahili speaking staff member was the pick of the lot, she was very polite and very professional. Gulf is an excellent airline and with their new airport in Bahrain now will be at par with other richer airlines. Keep up the good service Gulf Air.
1/10

"my flight has been cancelled"

✅ Trip Verified | I booked my ticket with Gulf Air in October 2021 and paid £3325.39 for two tickets. I was due to fly to Dhaka, Bangladesh from London Heathrow and return on 7 March 2022. Gulf Air sent me a message today, 16 November 2021 that my flight has been cancelled. I checked on-line and found that Gulf Air is still selling tickets for the 8 December 2021 flight and 7 March 2022 but at much higher price. This means that Gulf Air did not cancel flight but they have cancelled my tickets so that they can sell them for higher price.
10/10

"the whole experience was brilliant"

✅ Trip Verified | We booked our family holiday to Dubai with Gulf Air mainly because of the price difference compared to Emirates and Etihad. I was a bit apprehensive because of some negative reviews but the whole experience was brilliant from check in at Heathrow to the friendliness of all the staff on board both airplanes. The food was excellent and was even provided on the short flight from Bahrain to Dubai. The experience was identical for the return journey. The only negative was the choice for inflight entertainment. They do not have the selection of movies like Emirates. But overall a good experience. Will definitely use them again.
1/10

"told that a GDFRA return permit was required"

✅ Trip Verified | On 28 August my wife and I arrived at Istanbul Airport (IST) to check-in for our Gulf Air flight back to Dubai (DXB). We are both residents of the UAE and checked all the return entry requirements to board the flight. This includes a negative PCR Test, residency VISA and a valid passport. This did not include a GDFRA return permit as we had not visited a red zone country in the last 14 days (or in the last six months for that matter). Moreover whilst my wife holds a Dubai VISA, I myself have an Abu Dhabi residence VISA which means I cannot apply for a GDFRA return permit (as these are only for Dubai VISA holders), but instead can apply for an ICA (Identity and Citizenship Authority) return permit, which is applicable to holders of VISAs issued by all the other Emirates of the UAE, excluding Dubai. We approached the check-in counter at which time we were immediately told that a GDFRA return permit was required for ALL passengers flying to Dubai regardless of VISA. Moreover it was explained to us that all passengers in the previous weeks flying to Dubai had all had GDFRA return permits regardless of VISA (please note that this is impossible due to the aforementioned reason). Despite this situation we indicated that we would attempt to complete the application form online. Even approaching the local merchants to make use of their computers. When this failed the Gulf Air staff indicated that we should speak with the Emirates ticketing office and airline check-in staff (located on the complete opposite side of the airport) as they could explain in better detail the requirements to fly to Dubai. We proceeded to walk with all our luggage and no assistance from Gulf Air to the other side of the airport. However after speaking with the Emirates staff they confirmed our understanding that a GDFRA was not necessary in our circumstance, confirming the initial information in this complaint. Upon return to the Gulf Airline check-in counter we explained to the Counter manager what Emirates had said and we were met with severe hostility. She directed two of her staff to accompany us back to the Emirates check-in counter, telling one of them what we had told her, but in an extremely rude tone indicative of a person who believed that we were lying. My wife even tried to deescalate the situation, but the manager was so incredibly hostile and rude that further communication with her became counter-productive. We therefore proceeded back to the Emirates counter with the Gulf Air Staff, one of whom along the way informed my wife that they did not care for our situation and that we were in fact wasting their time and, as indicated above, reiterated that every passenger going to Dubai in the last few weeks had a GDFRA regardless of the VISA they held. This Gulf Air staff member was so rude he actually stopped assisting my wife with her bag and left us half way. Once back at the Emirates counter the Emirates staff explained to the remaining Gulf Air staff member that had not abandoned us that we did not require a GDFRA, however as the Gulf Air staff was apparently insisting on a document that was impossible to obtain, the Emirates staff themselves attempted to assist us in vain. I want to emphasize this point, that another airline's staff attempted to help us more than the Gulf Air staff with whom we had booked our tickets.
1/10

Not Verified | I had booked my flight from London to Dhaka via Bahrain and had booked a VGML (specific diet meal). Firstly the cabin crew obviously held a record of my specified requested meal although the air hostess lamely advised me that aircraft catering services had forgotten to load my specified order meal. For that reason I had travelled on a six hour flight without consumption of any food. I noticed during the whole flight that only one meal consisting of only a vegetable dish was served. All the passengers on board were extremely angry and frustrated. Your a world renowned and reputable airline yet your cabin crew portrayed this type of negative behaviour and offered a poor service. This is extremely unacceptable. I reported to the flight manager regarding my ordered/requested specific diet meal only to be told their sorry and that it is an error on the aircraft catering services side. However I am extremely worried now as I have booked a return flight to London on 27th October 2021 and that I will have to fly without the consumption of any food on board! I am a border line diabetic therefore I need to consume food at regular intervals otherwise I can not stabilise my insulin levels for long.
8/10

✅ Trip Verified | Great experience we had with the service provided by this crew. Our family of 2 flew from Heathrow to Bahrain and they were very attentive to detail. Our seat had plenty of space and we were lucky the airplane wasn't full. Staff was very friendly with the kids which made our journey nice and smooth. The food quality was great and there was plenty. The staff was very prompt to help. Can't thank enough the crew! 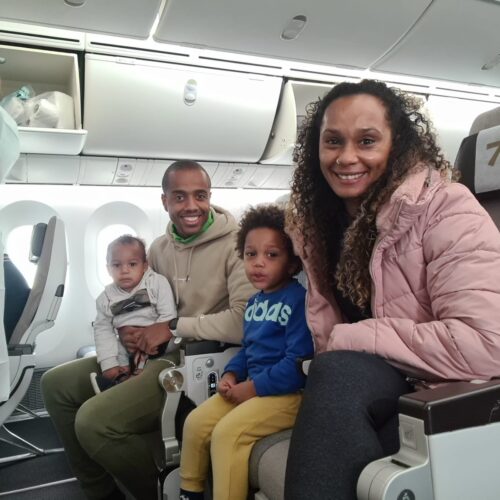 ✅ Trip Verified | 11 hours layover now means no hotel, no lounge access and no food and drink vouchers. Dismissed by rude staff at the transfer desk with the excuse of covid. I managed to pay for a hotel at the airport easily so it's nothing to do with covid and everything to do with money. The food on board was pathetic. I'm sticking with Qatar Airways from now on. Never again!
1/10

"book all of us for a flight next day"

✅ Trip Verified | We flew from Karachi to Bahrain to LHR. The journey, as long as it was already was supposed to continue to JFK on an AA flight sold on the same itinerary by Gulf. Due to a significantly late departure from Bahrain, the aircraft arrived late to LHR. The airline ground staff gathered 24 or so passengers from the flight and put them on a bus to T5 from T2 at LHR. Upon getting to T5, we were informed by AA that the gates are closed and they had informed Gulf already and that we needed to go back to T2 and deal with Gulf. This yo-yoing happened a few times. To make matters worse, since all 24 or so passengers were coming from red listed COVID countries, going through immigration and outside would have triggered a 10 day mandatory quarantine. The airport staff located and got a Gulf representative to come in and book all of us for a flight next day. He also gave the passengers a speech about how Gulf has done everything they can without even a simple apology. When we asked for pillows and blankets for the passengers, we were told Gulf has done all it can. All they provided were measly food vouchers. A number of the passengers are elderly and the treatment by Gulf has been ridiculous.
1/10

✅ Trip Verified | I travelled on Gulf Air with my 3 Months old Daughter in Jun 21, Travel was not very comfortable but the problem start when Gulf Air cancelled my return flight in July 21 and when i contacted them they said i need to speak to Agent to rebook even after explaining it is not agent who cancelled my flight, it is Gulf Air who cancelled its scheduled operation and it is their responsibility to give me alternate available date but they were very rude & unhelpful to listen anything. When i travelled last time with Qatar Airways and Emirates due to covid-19 they both also cancelled their schedule flights and both Airline staff helped me without any hustle in within 3 minutes emailed me my new ticket with alternate available flight. Gulf Air need to upgrade its 3rd world country`s policies & Staff Training before increasing the routes or Aircraft.
1/10

✅ Trip Verified | Gulf Air experience was extremely unpleasant. I purchased a ticket that is supposed to be refundable and also possible to change without any cost. Due to urgent reasons, I needed to get it changed or refunded and I requested it according to the policy (before 24 hours of the flight time). I'd have to wait for a minimum of 30 minutes on hold to be able to speak to customer services. When I asked if I could change it, they refused to help, so that now I'd need to buy a new ticket.
11 to 20 of 320 Reviews