Germanwings flight from Berlin Tegel to Dusseldorf. Cabin crew were friendly and professional. Good late evening snack: a cheese or salami sandwich, chocolate bar and a small bottle of water. Too bad the there is no in-flight entertainment.
5/10

Not a bad price but little choice of airline as BA don't fly this route. Essentially Germanwings is the low cost wing of Lufthansa and it shows. Unruly boarding. No inflight catering at all - weak and tasteless tea for €2.50! On the other hand, flights reasonably punctual, though outbound was 20 mins late.
2/10

"no info or staff"

Bad arrangements if outside the protocol. There were heavy fog in London and due to weather condition flight is cancelled. Reasonable but only one number that can never be connected is given to rebook Germanwings flights or claim hotel accommodation. It is fine that the Hotel/ flights needed to be rebooked but no instruction of how to claim those back. Flight booked again at the same time 7:15pm to Berlin and was delayed to 9:30pm. No info or staff until the monitor suddenly show the gate numbe at 8:40. Flight delayed so no public transport out of Tegel Airport for Berlin city center. No arrangement at all. Need to get a cab to hotel around 1am. So a lot of money like 500 pounds was paid for everything but no way to get it back. Only good thing is staff are nice. 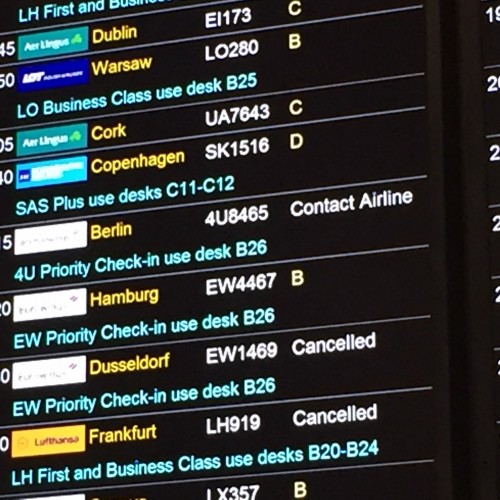 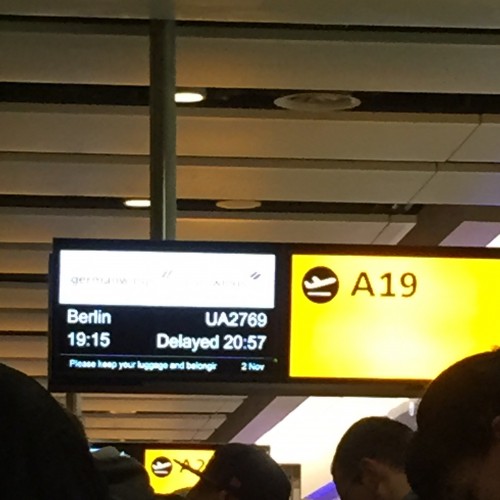 Flew from Dublin to Rome via Cologne on Germanwings. Website booking is very efficient and due to my fare type, I was able to select seat 1D for both flights. Check in was smooth and all flights left on time. Again due to fare type, I was given a sandwich, coffee and bottled water on both flights and the cabin crew were very friendly and professional. Transfer in Cologne was extremely efficient with no need to reclear security and a small and compact airport. Baggage claim in Rome was a zoo, but I would blame Rome tourism in July for that. All in all, a very positive experience on Germanwings and connecting in Cologne would by no means turn me away from flying them again.
9/10

Flying Germanwings "Best" section on domestic flights is the best product for a short haul domestic flight within Germany. Full catering and drinks service. Addtional 10cm seat pitch in rows 1-3, free middle seat etc. Free Lufthansa Lounge access. Flight was on time with a very friendly and professional cabin crew. The only downside is the A320 fleet is relatively old but obviously in good shape).
8/10

Hannover to Rome. At the airport we had a very smooth transition to the gate (took 20 minutes). Then we left, everything was on time and actually arrived 20 minutes early. Inflight cabin staff served small sandwiches and water. Even though this was only a 2 hour flight the cabin staff came several times to give out beverages. I enjoy Germanwings clean cabin and low prices. As a budget airline I was not expecting a lot, but friendly cabin staff interacted with kids and gave a relaxed flight.
2/10

"they have been unresponsive"

We flew with Germanwings (or tried to) on September 30th. After two lengthy delays passengers were notified that the flight was cancelled and to return to the check-in counter for further information. After waiting at the counter for another 30 minutes or so, staff began issuing refunds or providing alternate travel options to passengers. By this point it was quite late in the evening with limited options (plus we were 5+ hours after planned departure). We managed to get a voucher with 3 other passenger to get a flight from Stuttgart to Zurich with an ongoing connection to Amsterdam (flights were with Swiss). We made the flight and the connector (which was held back waiting for about 70 of us) however luggage did not make it. Short of this is the airline was ill-prepared to manage this. They offered little information or options to passengers. since returning home I have been attempting to contact them via email and phone calls to discuss compensation per passenger rights brochure and they have been unresponsive. Not a good way to run a business.
9/10

Very impressed with Germanwings. The flight was punctual, crew was professional and polite. I traveled Smart economy. Boarding was quick and efficient. The aircraft was clean, the Lavs were spotless. There was good legroom and we were given a choice of beverages and substantial snack. The arrival was ontime, and luggage was delivered promptly.
3/10

"I was refused some water"

I am less than impressed with Germanwings service to say the least. On my first connection to Hamburg the stewardess has told us that we could have some water for free, while everything has to be charged. During my second connection from Hamburg to London I was refused some water, despite being pregnant and not feeling well. I find this disgusting, the fact that a passenger will not be offered water if they're unwell, and will not be looked after in any way. Needless to say the stewards would only be nice to the passengers who have also booked their on board meals or bought on board drinks.
3/10

"the service crew were friendly but nothing more"

Flew from Palma de Mallorca to Cologne with Germanwings. Check-in was done in less than 15 minutes, we got seats in row 6 which were fine. Planes were late as always due to incoming plane being late, that is a general problem with Germanwings when you fly later in the day. There was no entertainment whatsoever and the service crew were friendly but nothing more. They charge you EUR 2,50 for 250ml a soft drink like Coke or Sprite, so we paid EUR 5 for two cans, that make EUR 10 for a litre. Nothing else was offered, so nothing special. No miles were credited, even as a miles and more member.
11 to 20 of 145 Reviews